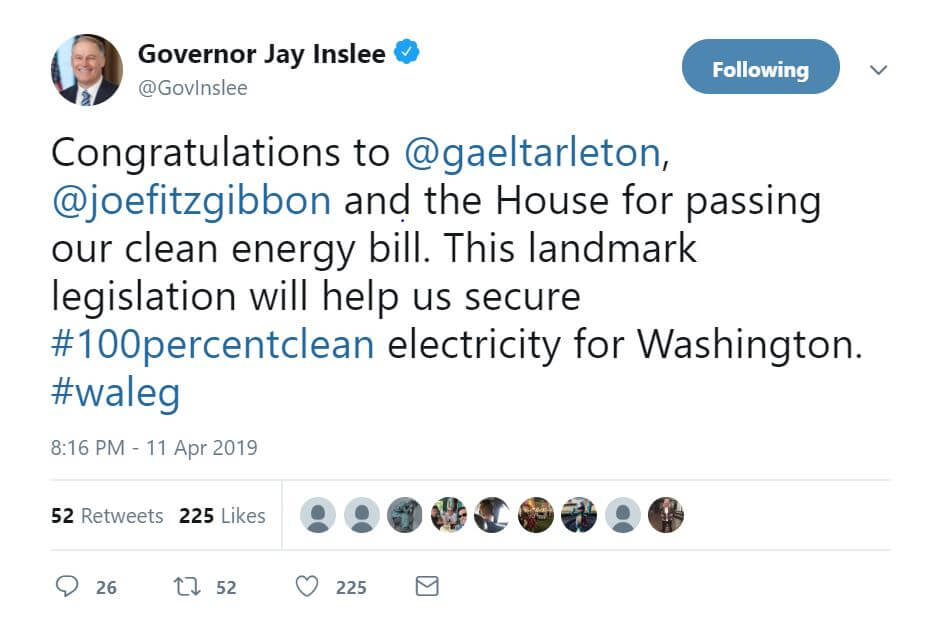 The following press release was provided by Washington Senate Democrats.

A historic bill to commit Washington to 100-percent clean energy from renewable and zero-emission sources took another step forward today following passage by the Washington House of Representatives.

Sponsored by Sen. Reuven Carlyle (D-Seattle) and in House companion legislation by Rep. Gael Tarleton (D-Ballard), the bill requires all electric utilities in Washington to transition to a 100-percent, carbon-neutral electricity supply by 2030 and to 100-percent carbon-free electricity by 2045.

“It’s time to move past the era of carbon into the next generation with modern, 21st-century energy systems using integrated wind, hydro and solar power,” said Carlyle, who chairs the Senate Environment, Energy & Technology Committee. “At a time when the federal government has functionally imploded on addressing climate change, the states are now taking the lead and moving forward on climate action.”

“Moving away from fossil fuels has to start somewhere, so why not here?” asked Tarleton, who chairs the House Finance Committee. “Washington has the courage to build a 21st century economy beyond coal, beyond fossil fuels, to maintain and build a quality of life for generations to come. Thank you to Sen. Carlyle and my colleagues for having the courage to make this choice.”

“We are rightly proud of how clean Washington’s electricity already is,” said Rep. Joe Fitzgibbon (D-Burien), chair of the House Environment & Energy Committee. “This landmark bill will take Washington the rest of the way there to 100 percent clean electricity, ensure reliability and lay the foundation for continued pollution reductions throughout our whole economy.”

Senate Bill 5116 would make Washington one of the first states in the nation to commit broadly to reducing greenhouse gas emissions from electricity while adopting a precise action plan to do so. It is also the most extensive measure on climate action that Washington’s Legislature has adopted since 2008, when it committed the state to reducing overall greenhouse gas emissions to 1990 levels.

Electricity remains the largest source of carbon emissions worldwide and is the third-highest emitting sector in Washington, after transportation and buildings.

The Senate approved the bill last month. The bill now goes back to the Senate for approval of amendments added by the House before it can go to the governor.