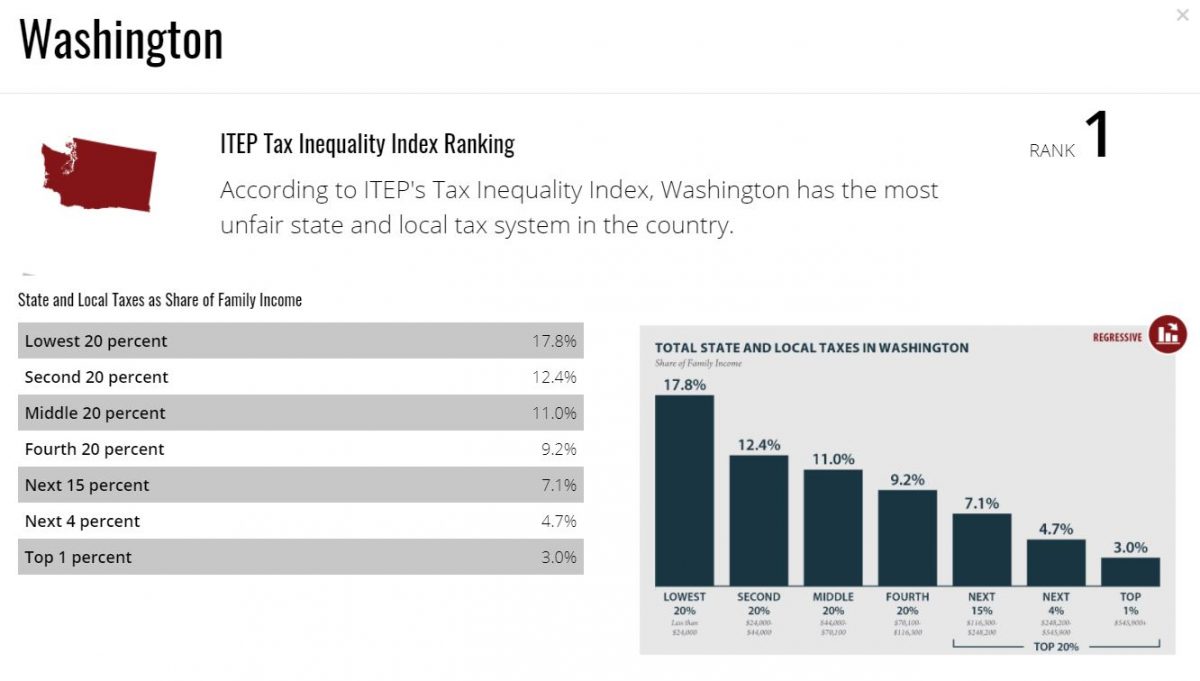 Answering the question of whether someone is taxed too much or perhaps not enough requires some level of comparison.

Answering this question in absolute terms is difficult for a host of reasons. So, invariably, the question of whether my individual tax burden is too high, too low, or just right rests on a different question: “Compared to what?”

So, in this second part of the two-part series, we answer this question of “Compared to what?” by looking at other states to see how Washington State compares when it comes an individual’s relative tax burden.

Comparing various state tax regimes and how they work has been studied at length. So that gives us a few ways to think about how Washington State compares to other states on the topic of tax burden.

Perhaps the most prominent study is from the Institute on Taxation and Economic Policy. It reviews the contribution in tax revenues by quintile within each state, and is updated every two years. So, the study tells us how Washington compares to other states, as well as how each quintile of Washington’s population compares to other quintiles within the state.

If you think that equality of opportunity is a bedrock principle of America, then findings from ITEP aren’t pretty.

Washington State comes in first for having the most regressive tax regime in the country. The bottom 20% of income earners pay 17.8% of their income to state and local taxes. The top 1% pay a modest 3.0%.

Coming in first means Washington State beats all of the other states for the most regressive regime in the country, including states that some Washingtonians might look down upon.

In Alabama, for example, a state that Washingtonians might like to think of as a place with less social equality than here, the state ranks 18th overall. The bottom 20% pay 9.9% of their income in state and local tax. The top 1% pay 5.0%.

Certainly, fiscal progressivity and social equality are not the same. But, social inequality does correlate with income inequality, a characteristic reinforced by regressive tax regimes. At least on this one data point, one might conclude that Washington State’s tax structure reinforces structural inequality in the state to a greater degree than the Jim Crow states, like Alabama.

The second most regressive state in the country is Texas. As a home to JR Ewing and to Jerry Jones, it’s a state that is proud to support risk takers and high income earners, so the ethos goes. Yet, Washington State is both more generous to the top 1% and more burdensome to the bottom 20% than even Texas.

So, are you and I taxed too much here in Washington State?

I can’t answer that. But I can tell you that, comparatively speaking, there is no better place in the country to be in the top 1%.

And, there is no worse place to be in the United States than in Washington State if you’re in the bottom 20% of income earners, according to ITEP.

Not everyone agrees that this is the way to look at this question, however.

Regressivity is a canard for almost all working Washingtonians…

Braun argues with the conclusions of the ITEP report, saying that a focus on regressivity is a “Wolf in sheep’s clothing” for a progressive income tax.

He says the states that ITEP says have the least fair tax regimes are generally doing a good job at creating economic opportunity for its residents.

But, he is changing the subject.

Moreover, by doing so, he inadvertently reinforces the ITEP conclusion by saying the blended average of Washingtonian taxpayers have a tax burden inline with the national average.

In Washington State, the rate on the bottom 20% is so high that an abnormally low level of tax burden on higher incomes is required to revert to the national mean. To achieve this blended average requires an extraordinary level of structural regressivity.

Where Braun makes his most compelling point, however, is here.

My Democrat colleagues have had complete control of the Legislature since 2018… Yet, despite having spent years touting the ITEP regressivity study, and lamenting the tax plight of the poorest among us, did the majority lessen the tax burden for any in Washington, least of all those with the lowest income? No.

In fact, the Democrats have done exactly the opposite, dramatically increasing the tax burden (by $25 billion over 10 years), most of which falls upon working Washingtonians. This includes three “Ps”: A new payroll tax on workers’ wages (equal to $9 billion/10 yrs) to take effect in January; raising local school property-tax authority (another $9 billion/10 yrs), which disproportionately impacts lower-income communities; and raising the tax on petroleum, which gets passed to consumers in the form of higher gas-pump prices.

Braun sets out a three part policy prescription to support low income Washingtonians that includes “A robust safety net” and “An economy with ample job opportunities.”

He also sets out this statement as the third piece of his policy response.

A tax system which, at the very least, doesn’t impose a larger tax burden on those with the lowest income. It should go without saying that raising taxes on the poor does not improve their situation.

On this point, perhaps both parties can agree.