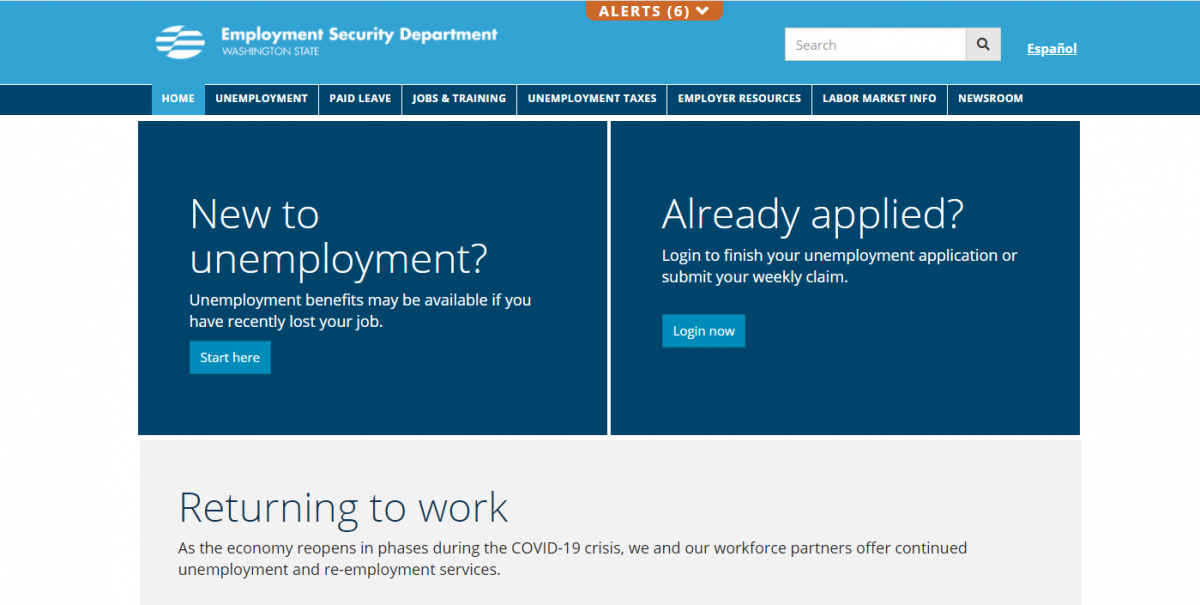 Working Washington, a labor-focused nonprofit, published a report this week alleging that the Washington Employment Security Department (ESD) has failed to provide benefits to tens of thousands of unemployed workers.

Titled, System Failure, the report surveyed over 1000 unemployed workers about their experiences with ESD and the impacts of delays. Additionally, the report contains profiles of twelve separate cases in which workers seem to have been denied benefits they were reportedly eligible for.

Far too many workers are structurally excluded from benefits because of their documentation status or other federal rules which currently bind the state’s unemployment system. But thousands of others who are eligible have been victimized by an entirely avoidable system failure: delays and errors in the Employment Security Department’s processes which have kept them from receiving unemployment payments,” reads the report.

The report specifies that the “delays and errors in ESD’s processes” involve a practice whereby ESD “automatically prevents payments on any claims it flags with errors, inconsistencies, or missing information — no matter how trivial and regardless of who is at fault for the error.”

If a clerical error is identified on an application, it can be flagged by ESD. A flagged application is either directed to the “adjudication” process or denied outright. ESD states on its website that most unemployment-insurance applicants receive benefit checks or a decision explaining why they are not eligible within three weeks of their initial application, but that “a small percentage of claims requires additional fact-finding, or ‘adjudication,’ to determine if the individual is eligible for benefits.”

With the scale and rapidity of the unemployment spike caused by the COVID-19 pandemic, the timeliness of ESD’s adjudication process was hampered, the agency said.

According to an update published by ESD on April 30th, a total of 787,533 distinct individuals had filed for unemployment insurance since the week ending on March 7th when COVID-19 job losses began.

Following the launch of the additional benefits under the CARES Act passed by Congress, the state saw the single largest week of claims in history – with nearly 1.5 million initial claims filed. For context, ESD points out, the week ending March 7 — before the crisis hit — saw only 6,584 initial claims filed.

The tsunami of claims we have been preparing for is reflected in this week’s data, as it shows the hundreds of thousands of workers applying for expanded benefits under the federal CARES Act since we updated our system to accept those applications on April 18,” said ESD Commissioner, Suzi LeVine in April. “This is, by far, the largest week of unemployment benefits delivered in our state’s history.”

Then on May 11, ESD launched “Operation 100%” — an effort to resolve all claims that were submitted to ESD between March 8 and June 18.

Meanwhile, ESD was beset by a $576 million unemployment scam — the largest in state history — carried out by a Nigerian fraud ring which targeted Washington and several other states.

When Operation 100% was announced, ESD said that roughly 57,000 individuals, or 7% of applicants, had been waiting, some for many weeks, for their claim to be approved.

The specific aim of Operation 100% was to have 100% of flagged applications resolved or benefits paid by mid-June. However, it was not until August 3rd that ESD announced it had resolved all claims included in the Operation 100% initiative.

Nevertheless, Working Washington says that the people profiled in its report should have been on the Operation 100% list, but had yet to be paid at the time of ESD’s August 3rd announcement.

In fact, the report says that some applicants are still waiting for their benefits.

Some are still stuck in adjudication. Others have been incorrectly denied, or received ‘approval’ but never paid out. Some had their claims disqualified as a result of ESD’s hasty fraud-response measures, which used a profiling system to stop payments on 200,000 claims until a specialist could verify their identity,” wrote ESD.

One case profiled in the report highlights the experience of a Seattle restaurant server named Jose. According to the report, Jose applied for unemployment insurance on April 2nd, but his claim was flagged and put into adjudication.

He tried to get through to ESD in every way he could — he made thousands of calls, setting his alarm for 6:55 am so he could start calling immediately when the phone lines opened up at 7, spent hours on hold, was hung up on, and sent dozens of messages through ESD’s web portal, begging for answers. Finally, on June 7, he got a call from a National Guard member staffing ESD’s phone lines. But the agent was calling to inform him that if he continued sending messages, he would be blocked. He also told Jose that his claim had now been denied — because his boss falsely claimed he was fired. When he asked what to do about the false claim, he was told to apply for Pandemic Unemployment Assistance (PUA).”

Jose is said to have filed PUA quickly, his account was flagged under ESD’s new fraud-prevention measures, and he had to wait for an individual agent to verify his identity. After several weeks attempting of calls to ESD, Jose’s was eventually able to get his identify verified after he emailed a local legislator, the report says.

Four months after Jose’s initial application date, on July 25th, despite receiving approval for his PUA claim, Jose never received his benefits. His weekly claims continue to be denied, according to Working Washington.

This has been nothing short of a nightmare. I now seriously take medication for the amount of stress and anxiety this has caused me — until I can get the all-clear to go back to work, I’m just waiting for the next problem from ESD,” said Jose.

In another case, Beth, a marketing manager from Burien, reported to be in adjudication from March until September due to a clerical discrepancy that arose from a move she underwent in 2019.

Beth, who had moved from Oregon to Washington in October, said she was denied payment because ESD didn’t have a record of her working 680 hours ESD instructed her to file a joint claim in Washington and Oregon.

After obtaining the joint claim and applying for PUA, her weekly claims continued to be listed as “pending.” When she managed to get through to ESD, an agent told her she was in adjudication because she had an open joint claim in Oregon and Washington. She then cancelled the claim she had previously filed in Oregon and attempted to proceed with ESD, Working Washington wrote.

After several back and forth exchanges with ESD that dragged on until the end of July, ESD’s calendar had entered a new quarter, rendering Beth ineligible for PUA because she met the 680-hour requirement in her base year.

Operation 100% is incredibly misleading. 100% of claims from before June have not been resolved. I keep receiving assurances that they are addressing the claims that have been outstanding the longest. I don’t understand how I do not fall into that category at five months and still pending,” said Beth.

Beth told Working Washington she finally received her payment in mid-September, only after connecting with a state senator who escalated her claim with ESD.

In a statement to the Wire, ESD Commissioner Suzi Levine said determining eligibility remains the primary roadblock to an expedient application review process.

Since the start of this crisis, unemployment insurance programs in Washington state have paid more than $11 billion to more than one million Washington workers. These benefits, paid within 1 week to 70% of claimants and under 13 days on average, have been a lifeline to workers across the state and throughout our communities. And we will continue to work our tails off – like we have been doing since the start of this crisis – to get everyone who is eligible their benefits. But therein lies the challenge. Eligibility,” said Levine.

“While the vast majority of claimants go through without issue, some find their cases need additional review or information before that eligibility can be determined. For example, our team needs to conduct identity verification, look into past due payments, reconcile multi-state employment claims or obtain work history information from employers. Or, on a weekly basis, various parameters might change such as an individual’s earnings or their availability for work. To do this work right and in accordance with the law takes sophisticated technology as well as skilled and trained staff. The scope and scale of the crisis has, unfortunately, created significant delays for some individuals – especially as new laws and guidance has changed throughout.”

According to ESD’s latest data, 20,233 claimants are not currently receiving payment and need their claims resolved. While this represents 1.5% of total applicants, the figure increased by almost 5,000 claims from the previous week.

Working Washington suggested that going forward, ESD should default to paying benefits, rather withholding them.

They must provide transparent public reporting of claims and reasons for non-payment. And they must agree to revisit cases until they can ensure each case has been correctly resolved,” reads the report.

On efforts ESD is taking to improve is processes going forward, Levine pointed to the newly established Unemployment Insurance Advisory Committee, in which employer and worker representatives, as well as the broader public, will have an opportunity to weigh in on the unemployment system and suggest reforms.

Levine went on to say that ESD is hopeful this crisis will be “an inflection point and catalyst nationally and locally to rethink how we build and deliver our social safety net to meet everyone’s needs.”

To those who are currently not receiving payment and whose issues need to be resolved, we are deeply sorry for the frustration and hardship these delays can cause and are working to resolve your claims as soon as possible,” Levine concluded.