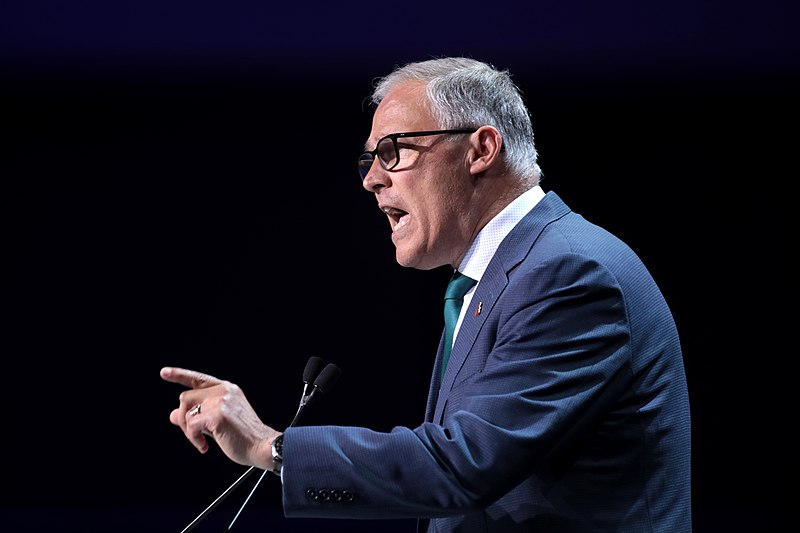 The Sunday Observer is a weekly feature of The Washington Observer, the Wire’s new sister publication. For more of the Observer, check it out on Substack.

Gov. Jay Inslee got a lot of ink out of his November trip to the climate summit in Glasgow, but we were more intrigued by a political side trip he made to Chicago en route to Scotland.

We ran across this in our semi-regular troll through the governor’s calendar¹ for story prospects. Inslee’s schedule is always sprinkled with interesting little signposts indicating his frequent shifts back and forth from elected official to national political figure/Democratic fundraising powerhouse.

One of those signposts is Tracy Newman, Inslee’s longtime fundraising consultant, who appears frequently to staff “personal time,” also known as shaking down rich folks for various kinds of political money.²

While some of Inslee’s official gubernatorial advisors traveled with him to Scotland, the Chicago leg of the trip was assigned to Newman, which made it politics and not governance.³ The airfare and hotels got charged to Inslee’s nominal 2024 reelection campaign, according to its filing with the Public Disclosure Commission. The taxpayers of Washington do get to pick up the security detail on these trips, as The Seattle Times Jim Brunner reported during Inslee’s bid for president.

Here’s why you should care about this: Inslee went significantly out of his way to make a trip that isn’t a vacation and appears to have exactly nothing to do with governing Washington. Instead of the relatively quick trip to Glasgow via direct flight from Sea-Tac over the pole to London Heathrow or some other handy European airport, he flew to Chicago, which isn’t really on the way. That’s two extra trips through COVID-infested airports and at least an extra day of Acting Gov. Denny Heck.⁴ Neither Inslee’s official spokespeople nor his political operatives wanted to talk to the Observer about it.⁵

The only public part of this trip was this appearance at the University of Chicago’s Institute of Politics with environmental journalist Amy Harder. It’s pretty standard Inslee: He spikes the football on climate wins in Washington while sounding the alarm about climate change globally.

But clearly, Inslee didn’t make this trip just to evangelize to environmentally conscious college students. He can and does do that right here at home.

The schedule indicates the real reasons for the trip were before and after the event. Beforehand, he met with Mark Devaney, chief technology officer of the terrifyingly named Lion Cave Capital⁶ and a reasonably large whale among Democratic political donors, per the Federal Elections Commission’s database.⁷

Afterward, he had dinner with one David Axelrod, who happens to be UChicago, class of ‘76, and founding director of the aforementioned Institute of Politics. They dined at Bar David, which we have to say looks really strong, food-wise⁸, for a restaurant housed inside a university building.

The political nerds among you — and let’s face it, that’s nearly all of you — will recognize Axelrod as one of the architects of Barack Obama’s historic 2008 presidential win. Along with the gig at his alma mater, Axelrod is all over CNN, does a podcast, and generally makes the scene as political sage.

He’s also something of an Inslee fan. The governor’s been on the podcast, and here’s Axelrod on Inslee as the governor was folding his presidential bid a couple of years ago:

“Jay Inslee didn’t find his lane, but he impressed me with his smart, earnest advocacy around climate change. He leaves with his dignity intact and reputation enhanced, which isn’t always true in presidential races.”

So all this begs the question: Is Inslee thinking about his next act, and do those thoughts extend to a possible bid for president in 2024? Because if you were thinking about that, you’d seek out someone who got a longshot elected over a politically problematic establishment candidate of his own party.

Under normal circumstances, this would be basically unthinkable, and certainly nothing a Democratic governor would say out loud. The current president is a Democrat in his first term. And even if he bows out due to his advanced age, the vice president is plainly ambitious for the top job. The next real opportunity for any other Democrat should be no earlier than 2028.

But here’s the thing: Joe Biden is really unpopular. As of this week, he’s running at 42.9 percent approval, per FiveThirtyEight’s tracker. That puts him south of Jimmy Carter’s average and just a couple of points north of Donald Trump’s. Kamala Harris is in similar straits. If those numbers stay low, party loyalty could fray, and a Biden-to-Harris handoff might not work. Add in continued federal inaction on climate change, and Inslee might well see a lane for himself.

“You win elections by contrast,” Inslee told the UChicago kids. “You create a contrast with your opponent.” He was talking about beating Republicans with climate change at the center of a campaign, but the maxim applies in primaries as well.

The following, day, Inslee had an even more intriguing meeting before catching an Aer Lingus jet⁹ to Dublin: He went a few blocks downtown to see Shelia Nielsen, a kind of high-end career counselor. Among her services is helping: “both lawyers and non-lawyers through difficult career direction issues and decisions.”

Apparently, sometimes you’ve got to fly to Chicago to get the right kind of advice.

Lt. Gov. Heck got to be Gov. Heck again on Dec. 10-12 when Inslee jetted off to New Orleans for a weekend with the Democratic Governors Association.

For those of you unfamiliar with the DGA, it’s a straight-up dark-money political action committee that raises enormous sums of money from really rich donors by selling access to the governors. All this cash-raking happens without much real-time transparency¹⁰. The DGA’s financial muscle shows up mostly when it spends money, triggering disclosure laws at the state level. For example, it gave the Washington State Democratic Party $800,000 in 2020, the last year Inslee, a former DGA chair, was on the ballot.

Most of the money flows to Democrats protecting or challenging for governor’s mansions around the country. But way back in 1992, the DGA played a big part in the election of Bill Clinton, the last Democrat to upgrade from one of those mansions to the swankier pad on Pennsylvania Avenue in the other Washington.

All we know from the Inslee schedule is that he and his wife spent two nights at the Ritz-Carlton and hit a variety of events at antebellum mansions that appear to mostly get used for really ostentatious destination weddings.

This trip appears to have been mostly on the DGA’s tab. The only trace in the governor’s financial disclosures is about $1,000 in airfare for First Lady Trudy Inslee, charged to Inslee’s surplus campaign account. Also of note in the surplus fund’s most recent disclosure: a $90,000 transfer back to Jay Inslee for Washington, that nominal campaign for reelection in 2024.

1 Pour one out for the ghosts of Jolene Unsoeld and the many transparency-minded “yes” votes on 1972’s Initiative 276 who have since left us.

2 While Inlsee’s 2024 “campaign” normally takes in about $30K a month, which is enough to maintain a permanent political operation, it’s likely that he’s raising bigger money for national PACs that don’t generally have to report to campaign finance watchdogs.

3 The folks on the public payroll aren’t allowed to do politics on the clock. Accordingly, the governor’s press shop declined to comment on the Chicago stop. The people who work for his political operation didn’t get back to us.

4 By law, the lieutenant governor takes over when the governor leaves the state. Fortunately for Inslee, Heck’s a reasonable man, so there’s none of that awkwardness with reversing random executive orders.

5 The silence of Inslee’s various aides and operatives poses a mild epistemological problem: We don’t actually know that most of these events actually took place as scheduled. We’re just going to assume they did.

7 For example, in 2020 Devaney gave more than $15,000 to the Biden Victory Fund and north of $20,000 to PACs helping U.S. Rep. Lauren Underwood, D-Illinois, defend her competitive seat in suburban Chicago.

8 We’re just going to assume that Inslee went with the steak frites with chanterelle butter over the roasted salmon with harissa miso glaze because a) the fish was almost certainly farmed and b) who orders salmon in Chicago in November?

9 An Airbus A330-300, most likely. Apparently not worried about carrying Snohomish County in 2024.

10 What goes at DGA typically stays at DGA, but the Observer knows a bunch of folks who have been behind the curtain. IRS filings periodically give a snapshot of where the money comes from. Per the good people at Open Secrets, major donors as of 2018 included the pharmaceutical industry, insurance companies, labor unions, and Microsoft.