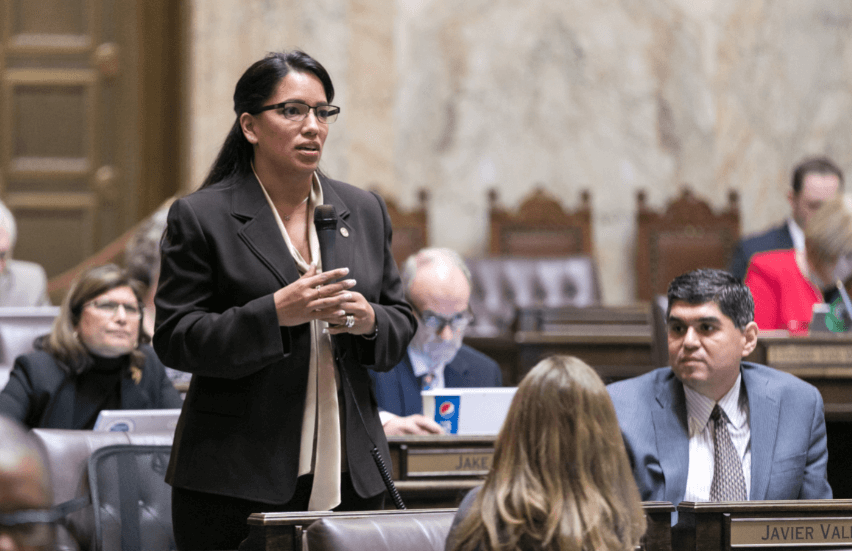 ﻿Could this be the year Washington exempts feminine hygiene products from sales tax?

Washington’s House Finance Committee today heard testimony on a bill, filed by Rep. Kristine Reeves, that would permanently exempt feminine hygiene products like tampons and sanitary napkins from sales and use taxes.

The earliest record available online for a similar bill is from 1995, when a group of representatives proposed a tax exemption on feminine hygiene products alongside an exemption for contraceptives. Most recently, bills with similar aims — one from the House and two others from the Senate — did not make it out of committee last year.

The exemption would come at a cost: The Department of Revenue estimates in its fiscal note that the exemption in Reeves’ bill would cost the state $8.1 million in revenue in the 2019-21 biennium and $9.4 million in the following biennium.

At this point, there’s been no mention of how the state would make up for that $8 million+ yearly revenue loss should the bill pass this time. Rep. Reeves said she thinks there’s a “variety of conversations around revenue options” the state could look into.

“Ultimately, what I’m most interested in is making sure we’re not unfairly taxing women for something that is a natural occurrence,” Reeves said. “It’s a biological occurrence and something that we should not be penalized [for] in our family budgets because we can’t live without it.”

There are two similar bills in the Senate this year: one that was pre-filed by Sen. Manka Dhingra and one pre-filed by Sen. Lynda Wilson; both bills are scheduled for public hearings next week. The only obvious difference between the bills filed by Reeves and Dhingra is that the senate bill defines feminine hygiene products by explicitly stating that items like “soaps, cleaning solutions, or shampoo” are not included. Rep. Reeves’ bill, in contrast, defines “feminine hygiene products” as “sanitary napkins, tampons, menstrual cups, or any other similar product sold at retail designed specifically to catch menstrual flow either internally or externally.”

While that language sounds narrow, Reeves sounded supportive of including the items that senate bill excludes.

“I haven’t seen the Senate’s version, but — for me — every woman’s hygienic health is hers to determine,” Reeves said. “I don’t think that that’s something I, as government, get to regulate for her. At the end of the day, whether it’s feminine hygiene wash, whether it’s douche accessories, whatever it might be … that’s a woman’s hygiene. And she, again, doesn’t get to control this bodily process. So, a lot of women have unique needs in that process, and so what I’m most interested in is making sure that the full spectrum of tools are available to every woman to make sure that she’s living the healthiest lifestyle she possibly can.”

The only challenge Rep. Reeves foresees, aside for filling in for the revenue loss, is that the bill’s topic is sometimes viewed as sensitive.

“I think the biggest challenge is always having what seems to be a very intimate conversation about a biological activity in a very public forum,” Reeves said. “But I think it’s a conversation I’m fully prepared to have, because again I think this really comes back that — as women — we’re not being overly burdened for something we have no control over. And it’s not like this is a luxury product, right? This isn’t something I can choose to eliminate from my budget when things get hard.”

Now that the state Legislature is a little over 40 percent women, Reeves is hopeful that momentum in favor of the bill could be strong — the bills from both chambers have bipartisan support.

“It’s easier to have a conversation about something this intimate when you don’t have to try to explain to people what a uterus is and what it does,” Reeves said.

Several states have either already exempted such products from their sales tax or have introduced similar legislation. And recently, Crosscut’s David Kroman reported that the Seattle City Council may soon explore exempting such products from at least the city’s portion of the tax.

Editor’s note: This story originally neglected to include Senate Bill 5147 as a similar bill; it’s now included, and a link to that bill is provided.