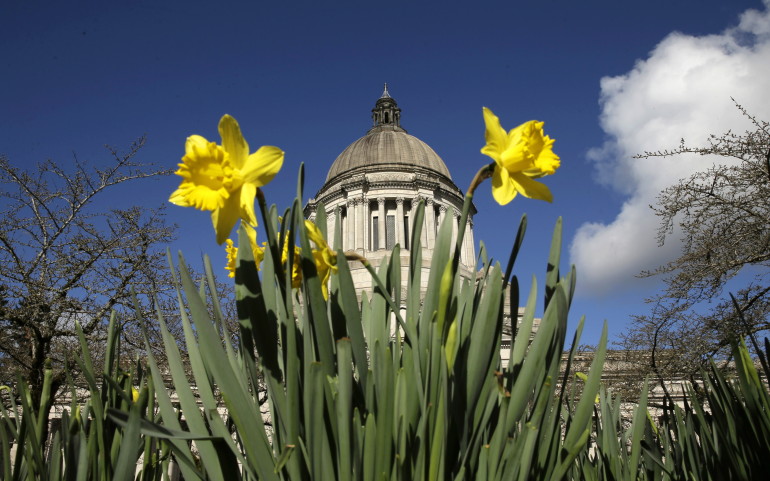 After months of facilitating health policy conferences around the west coast, editing, and writing for the Wire and our sister site State of Reform, DJ Wilson is taking a much deserved day off. He left this week’s edition of Morning Wire to me and I’m not complaining about it, as this was an exciting week both at the Legislature and for Washington State politics more broadly.

With help from Madeline Shannon

The Washington State Wire reached out to several policy insiders last week to ask what they thought the story of this legislative session has been so far. One theme that came up in several conversations was bills related to health care, such as the prior authorization bill SB 6404.

Several bills addressing health care were introduced this session, prompting discussions about health care costs and prescription medication. Not everyone has their eye on health-related bills, specifically — some pointed to House Bill 1808, which makes a library and nonprofit tax exemption permanent, while others prioritized efforts related to housing and homelessness, like House Bill 1278.

Garbe Reser raised more than $42,000, none of which came from business donors or PACs, over the first 11 days of her campaign; more than double what both of her Republican opponents — Rep. Bill Jenkin and former Walla Walla County Commissioner Perry Dozier — raised over the first two months of their campaigns. The 16th District includes Columbia and Walla Walla Counties, most of southern Benton County, and Pasco.

Washington Realtors Government Relations Director Nathan Gorton spoke in this edition of Wire Insider about efforts in the legislature to address the housing affordability crisis through policy that improves urban housing supply and fills market gaps. Building off the passage of Rep. Joe Fitzgibbon’s 2019 bill aimed at increasing urban residential building capacity, HB 2343 passed off the House floor on Sunday in a 93-2 vote.

“I think in the past when [the legislature] started looking at housing issues they just focused on homelessness, and while homelessness is certainly an important issue, it’s a symptom of the broken housing market. Looking at it in a more global way and looking at how we can supply first time home ownership housing, affordable rentals for people 80-100% of the AGI as well as subsidize people who are on the lower end, and having that as one cohesive policy; i’m excited to continue talking about that.”

I attended both Mayor Pete Buttigieg and Senator Bernie Sanders’ events in Seattle this week. Buttigieg was in town for a fundraiser billed as “Brunch in Seattle with Mayor Pete.” While the event was closed to the press, the campaign allowed me to attend a portion of the event as pool reporter. Buttigieg delivered familiar stump speech remarks and answered audience questions about how he would propose to help the 11,000 homeless people in King County and how we would make health care more affordable for senior citizens.

Senator Bernie Sanders held a campaign rally in Tacoma on Monday evening where he was joined by U.S. Rep. Pramila Jayapal and a bevy of local surrogates. Sanders delighted a crowd of over 17,000 supporters with familiar jeremiads against the corporate elite and the Democratic establishment.

With a budget revenue forecast coming up on Feb. 19, buzz is in the air about what issues will be prioritized this session. Aaron Wasser, communications director for the Senate Democrats, said some issues that could be addressed include homelessness, K-12 education, and affordable housing.

Last year, the budget contributed investments to K-12 education, special education and mental health, among other priorities, making up a budget Sen. John Braun described last year as “robust.” Economic growth, in part, allowed the budget to cover these investments.