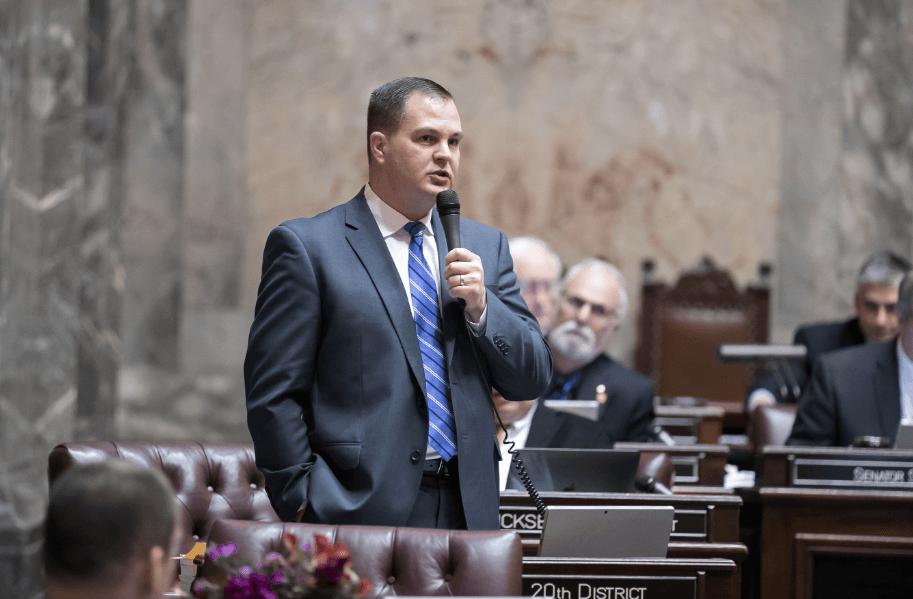 Sen. John Braun has served in the Washington State Senate since 2012. He represents the 20th Legislative District, which includes parts of Thurston, Cowlitz, Lewis, and Clark Counties.

Braun serves as Ranking Member on the Senate Ways & Means Committee and on the Financial Institutions, Economic Development & Trade and Labor & Commerce Committees. Previously, he served as Chair of Ways & Means in 2017.

The Wire caught up with Sen. Braun post-session to talk about the budget, tax bills that passed, and his forward-looking priorities.

The interview will be published in three parts. In this first installment, Braun elaborates on the budget and taxes that passed this session.

Sara Gentzler: To begin, can you give me a rundown of the budgets and taxes that passed this session, from your perspective?

John Braun: I’d start by saying we entered the session… with probably the best budget situation we have been in, in this century. I mean, we entered with a budget that was scheduled to grow from $44 billion for the current biennium up to, roughly, $50 billion with maintenance-level growth. Particularly, most of that growth is related to the investments we made, the law we passed in 2017 to fully fund K-12 public education. And, thanks to our very strong economy, all that growth was covered with existing revenue, plus — if you looked at the four-year balance — we had, at that time, a $500 million ending fund balance.

Something like that is unprecedented: To have that level of growth and have the economy cover that is great. In the time I’ve been in the Legislature, we haven’t come in with a positive four-year ending fund balance in any year.

On top of that, we had a number of things that happened that added to the available ending fund balance, to the point that it was almost over $3 billion — almost $3.5 billion — to the four-year balance by the time we got around to actually making the final decisions on the budget.

When I say ‘we,’ by that point it was strictly a partisan process.

The majority had decided that they weren’t going to do a bipartisan budget, which, I might add, is the first time that’s happened in Washington since, I believe, 2007… And they decided that, at that point, nearly $4 billion over four years we could spend on new stuff, beyond this growth in the budget, wasn’t enough and opted for significantly increased taxes.

I could run through the taxes — and there’s a whole bunch of them, some of them which apply directly to the operating budget, some of them which don’t. I guess my point is that we didn’t need taxes. We had a very robust budget, to begin with. It would’ve grew considerably, added considerable funding to K-12. We had enough revenue under — at the time — existing law to make additional investments in things like K-12 and special education and mental health and forest fire suppression and prevention — things that I think we needed to do and we did do, ultimately.

Three good things with the budget are: They did add significant funding to mental health; although, I’d say the more important part of mental health is not the funding, so much as the policy and the plan to move to community mental health. The investment in forest fire prevention and suppression was long overdue, and it’s good to see that happen. And, while it’s not done, I think the investment in special education was, again, important and we made positive steps.

But, broadly, we just spent way more money than we should have. We raised enormous new taxes to do that, and my concern is that this new budget that grew by 18% from the current budget — which, by the way, had grown by 44% over the previous three bienniums — is just, frankly, unsustainable.

I think we already see that in one aspect on the B&O bill on services… It’s kind of ironic. They said, ‘Higher ed’s important, but we’re not going to put it in the base budget. We’re going to make higher ed come and ask for a new tax, so that they can get the funding they need.’ That’s not making them a priority. If they’re a priority, they put them in the regular budget.

On top of that… they created this new standard of evidence that’s never been used before in tax law, in Washington or otherwise: If you don’t think you owe the tax, you’re required to provide clear, concise, and convincing evidence to prove that. Before, in all other law, it’s a preponderance of evidence. So, a higher standard to prove that you don’t owe the tax. That’s not how tax law’s been. Historically, in Washington and other places, you write very clear, concise tax law and, if the state can’t show you you owe it, you don’t owe it. We, basically, just changed the rules.

Here’s the really interesting part: Even the majority recognized this was bad policy, this was bad tax law. The chair of Law & Justice, Sen. Pedersen, recognized this and offered an amendment on the floor that changed this. If you go back and listen to his speech, he’s like, ‘This is the wrong way to do things, we couldn’t do it, I’d really like to undo it in the law immediately. But we need the money, so, I’m going to undo it two years from now.’

It’s nuts. Jamie Pedersen is a smart guy, he’s a good lawyer, he knows this is bad policy. They just want to spend too much money.

So, he said, ‘Well, we’ll undo it in two years.’ They went ahead and passed the budget with this unusual standard for two years, and then it goes back to the historic standard.

What they didn’t do is get a full fiscal note before they passed the budget based on that. The fiscal note that just came in last week showed that that simple amendment — which was the right amendment, only it should’ve been done two years early — took $150 million out of the four-year revenue for that bill. Literally, a third of the money in that second two-year biennium was based on this unprecedented standard of evidence that we know was wrong.

So, two things. One: We passed a bill we knew was wrong. We did it anyhow, we just wanted the money, because we couldn’t make a decision about main priorities. And two: I said ‘unsustainable’ earlier — already, [it’s] unsustainable. Over the four-year, we recognized spending for $900 million. And, less than a month after session, we’re $150 million short.

And guess what else was in that bill: That bill was written so that it’s exempt from the four-year balance. So, we’re right back to spending more than we can afford, so we can come back next year and claim we’re broke and need more taxes. It’s just enormously disappointing, in that way.

I get that folks who are well-motivated to try to fund higher education, they want to do good things. But this is the wrong way to do it. This is poor policy. It was simply a matter of, ‘We need more money.’

In the next installment of this interview, Braun gives his thoughts on collective bargaining agreements’ role in this session’s budget and insight into working with Ways & Means Chair Sen. Christine Rolfes.