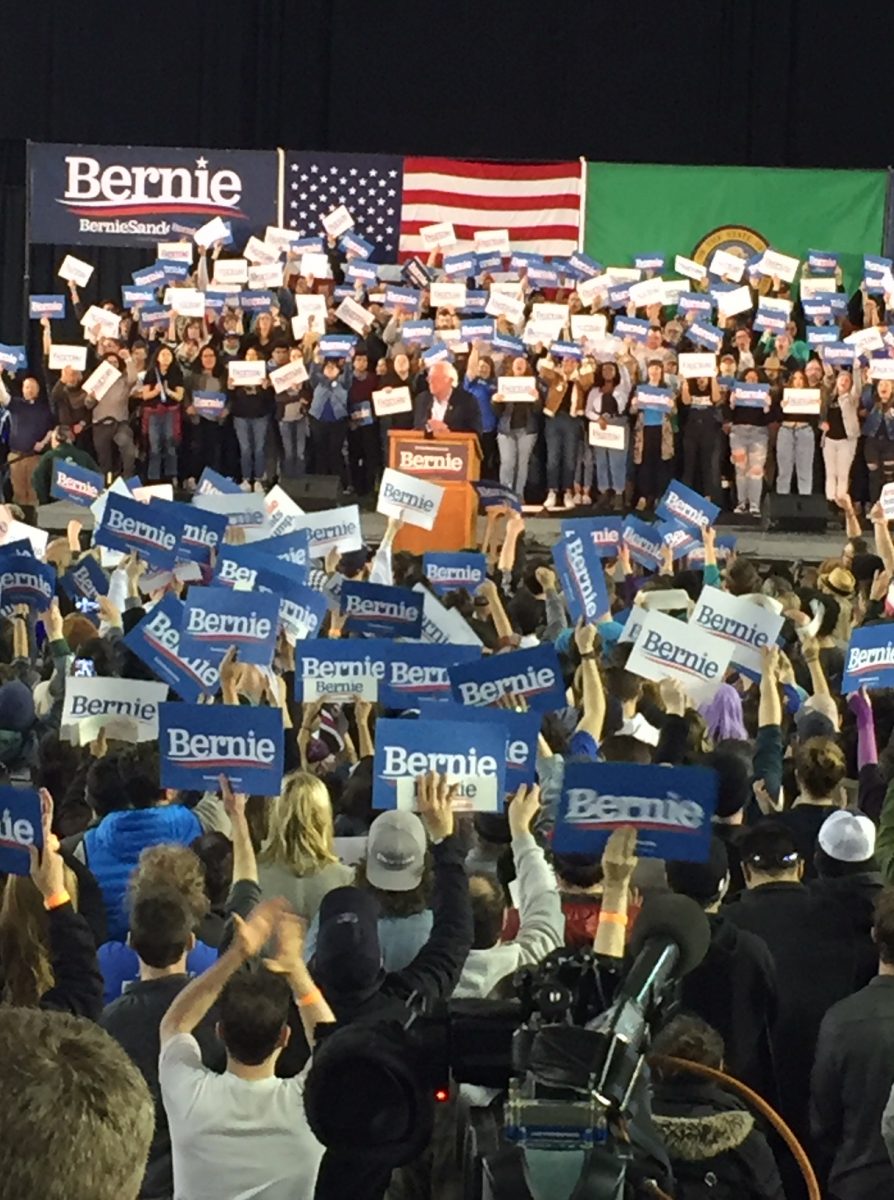 Seattle U.S. Rep. and National Health Policy Chair for the Sanders campaign, Pramila Jayapal, and a bevy of local surrogates warmed up a crowd of over 17,000 energized supporters in a packed Tacoma Dome.

Speaking on Presidents Day, Sanders delighted the crowd with familiar jeremiads against the corporate elite and the Democratic establishment as he marches toward the March 10th Washington Primary.

There are fundamental problems in this country that must be addressed. We will not accept the massive levels of income and wealth inequality that exist today. We will not accept an economy in which three people own more wealth than the bottom half of our society. Where the top 1% own more wealth than the bottom 92%. Where 500,000 Americans will be homeless tonight at the same time that massive tax breaks have been given to billionaires.”

Early on in his speech, Sanders reserved stinging criticism for one of his primary opponents: former New York City Mayor Michael Bloomberg.

Today we say to Mayor Bloomberg we are a democracy not an oligarchy, you’re not going to buy this election,” Sanders proclaimed to a roaring crowd. “And we say to Mr. Bloomberg, you are certainly not going to win when you have a record in New York City that included racist policies like stop and frisk which caused communities of color to live in fear and humiliation in New York City. You’re not going to win an election when you opposed raising the minimum wage. You know, people who have billions of dollars should not be opposed to raising the minimum wage above seven and a quarter an hour.”

Sanders covered all of his signature issues, underscoring his support for the Green New Deal, tying wages to inflation, strengthening unions, and Medicare for All.

We are going to end the international disgrace of our great country being the only major nation on earth that does not guarantee health care to every man, woman and child. Health care is a human right not a privilege. It is totally insane that today we are spending twice as much money per person on health care as is Canada or any other major country on earth. The average working family in America is spending $12,000 — 20 percent of that family’s income. But in spite of that huge expenditure we have 87 million people who are uninsured or underinsured. We have, and this is a total disgrace, we have 30,000 people each year who die because they don’t get to a doctor in time.”

Health care was a dominant theme throughout the rally, especially in Rep. Jayapal’s remarks before she introduced Sanders to the stage.

Is it radical to believe every person should have guaranteed comprehensive universal coverage?”

Later on, Jayapal invoked the words of Dr. Martin Luther King in expounding her support for Sanders’ policies aimed at implementing structural change.

Dr. Martin Luther King in his speech at the mall said this is no time to engage in the luxury of cooling off or take the tranquilizing drug of gradualism,” said Jayapal. “What we need in our next president is somebody who will fight for us, somebody who believes in that deep structural change that reverses decades of the worst inequality in the United States, somebody who takes on institutional racism, sexism, and classism.”

Sawant joined with Sanders in railing against the Democratic establishment.

Mosqueda lambasted the tax structure in Washington State as regressive and a moral outrage.

We have seen this upside down tax system in Washington State. And the consequence is that people are dying on the doorstep of prosperity…We stand for Bernie because he will end corporate welfare.”

Ultimately, the throughline over the course of the evening between Sanders’ stump speech and all of his surrogates’ remarks was the consistency Sanders has displayed throughout his career; advocating for the same policies and ideological positions long before he ran for president.

Jayapal — who endorsed Sanders over another progressive in the race, Senator Elizabeth Warren — put a premium on consistency in her remarks.

Ballots for the March 10th Washington primary will be mailed this Friday.