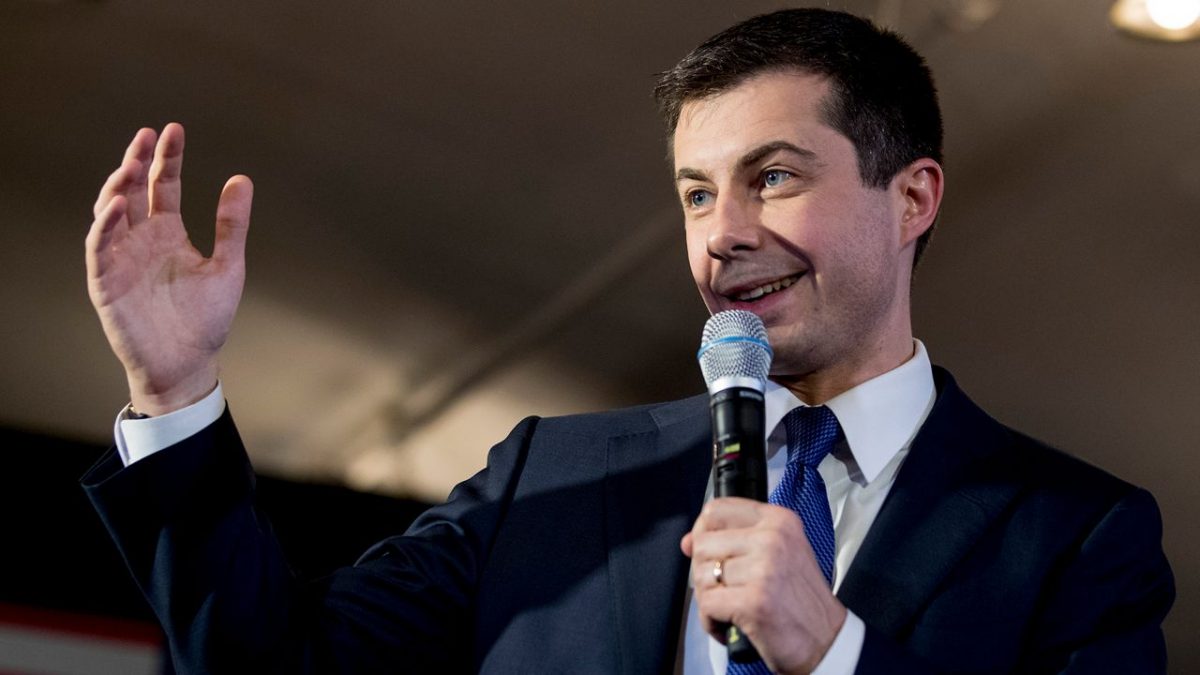 Mayor Pete Buttigieg was in Seattle on Saturday for an early afternoon fundraiser.

The Seattle fundraiser was the fourth in a series of 10 fundraisers the Mayor will attend across six states in a 14-day period.

The fundraiser, billed as “Brunch in Seattle With Mayor Pete”, was hosted by Suzi and Eric Levine at the Bell Harbor International Conference Center. Suzi Levine is the former U.S. Ambassador to Switzerland and Liechtenstein. Eric Levine is an entrepreneur and the founder and CEO of CellarTracker.

According to its website, CellarTracker is the world’s largest collection of wine reviews, tasting notes and personal stories from people who love wine.

The campaign estimated that about 350 people were in attendance.

The attendees gathered in a wide room with sweeping views of the fog blanketing Bell Harbor Marina, and Panic! at the Disco’s “High Hopes” emanated from the room’s speakers as the crowd waited for Buttigieg to take the stage.

The song, which features prominently at campaign rallies and events, seems to be included in what a Twitter account monikered “Seattle For Pete Buttigieg” calls “The Buttijams Playlist”.

Finishing his brief introduction of Buttigieg, Mr. Levine said “He is the person who can both rebuild our government, unify our party and most importantly, unify our country uniquely.”

Mayor Buttigieg took the stage to cheers from the standing-only crowd and thanked the campaign’s “host committee” and “investor circle” for putting the event together.

Thanks for lining up a room with a view, I don’t often get to do this,” quipped Buttigieg.

Buttigieg pivoted to his stump speech remarks by asking the crowd to form an image in their mind, one that he said guides the campaign’s thinking: how it will feel when the sun comes up and Donald Trump is no longer the president.

How’d you like to see a president who talks a big game about supporting working people but who’s only economic promise kept was cutting taxes for corporations and the wealthiest, to have to stand next to somebody who lives and works in a middle class neighborhood in the industrial Midwest.”

After about ten minutes of stump speech remarks, Ambassador Levine took the stage to read pre-written questions from supporters.

The first questioner asked what Buttigieg would propose to do to help the estimated 11,000 homeless people residing in King County.

Confronting homelessness is one of those challenges so intractable that I think it’s led to a level of despair and yet there are concrete steps we can take to make a difference. You look at a specific part of the population of people experiencing homelessness and deliver specific solutions to make a difference. In our city, we found that you could create by-name lists to connect people with the services they need. But it’s going to be different for youth, veterans, families with children, so we can’t have a one size fits all strategy. Part of it is housing. We’ve got to build more affordable housing in this country and my plan will create two million additional units.”

On the issue of homelessness, Buttigieg also called for the building up of “mental health infrastructure” that recognizes the overlap of mental health and substance abuse challenges.

Answering another question regarding Buttigieg’s policies to advance care for rural and underserved areas, the Mayor said:

All the sizzle in the health care debate is on the coverage side. And I get it, it’s a very exciting debate. But not enough is being said about the provider side; making sure that doctors, nurses, nurse practitioners and all those in the clinical environment are being supported. Part of that ties back to the coverage side as we’ve got to have a reimbursement structure that draws more people into the fields there are shortages of. We’ve also got to have a more flexible clinical practice that is able to cap the ability of nurse practitioners to make sure we’re filling in the gaps in care.”

During the fifteen minute question and answer portion of the event, Buttigieg was also probed on issues unrelated to public policy.

A supporter asked Buttigieg if he would consider hiring Seattle resident Dave Matthews and his bandmates to perform at the Mayor’s inauguration ceremony.

If anybody knows him, please let him know I’d be excited to have his band involved in anything we do, at any time, really.”

After the event, Mayor Buttigieg was scheduled to leave immediately for Las Vegas for the Clark County Democratic Party “Kick-Off To Caucus” Event.