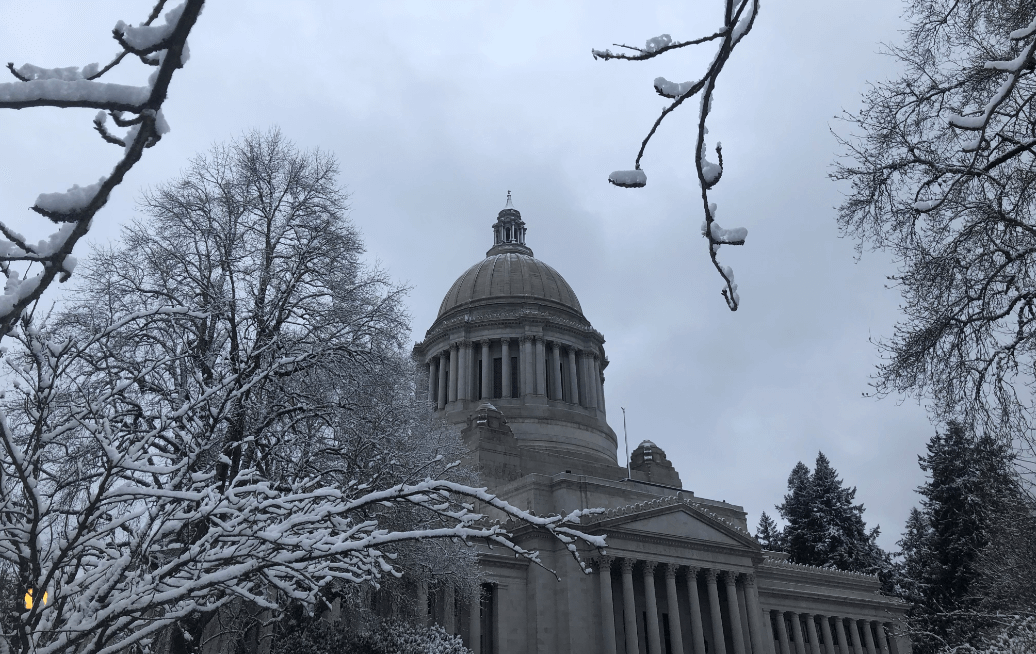 “80 year olds ripping down 65th Ave at the first sign of snow. Seattle just seattling,” wrote one citizen documenting the goings-on this weekend. Seems like an apt description.

Stay safe on the icy roads today and as always, thanks for reading!

1. 2021 policy committee cutoff: what passed and who had the most bills

Before the fiscal committee cutoff next Monday, the House will run about 15 bills per day through executive session. Speaker Laurie Jinkins said yesterday that there are more bills waiting in Appropriations than the Committee has had in a “very, very long time.” Budget writers will be assessing how many bills they think can move this week.

The dispute is a continuation of a criticism that Sawant has leveled against Democratic state legislators this session and last regarding preemption and political tactics. There is no Seattle capital gains tax for the statewide bill to preempt, but Sawant’s attempt to shift the focus of the hearing to movement-building is downstream of a divergence among progressives over how to approach tax reform.

Senate Republicans dropped their 2021–23 operating budget proposal last week. According to a Washington Research Council analysis, the proposal would would transfer $1.788 from the budget stabilization account (BSA, or the rainy day fund) to the NGFO.

Sponsored by Sen. Lynda Wilson, this proposal would override the Democratic COVID relief package passed by the Legislature earlier this month. In doing so, the proposal has been designed to incentivize school reopening. It would require $824.9 million in federal funding for schools to be allocated to districts based on whether they are open for full in-person learning. By contrast, the COVID package passed by the Legislature allocates $668.1 million to school districts as long as they have submitted reopening plans. WRC spelled out a few more differences between the two proposals here.

4. “Covered lives assessment” on the move after being negotiated down

A substitute version of Gov. Inslee’s “covered lives assessment” to fund foundational public health services passed executive session last week and has been referred to Ways & Means. Health carriers, Medicaid managed care organizations, and third-party administrators would pay a fee of $1.92 per member per month in fiscal year 2023, down from the $3.25 proposed in the original version. By fiscal year 2026, the fee would reach $3.07 per member per month.

Sponsor Sen. June Robinson said this assessment will create a permanent, reliable funding source for public health districts. By some estimates, the spending total needed for adequate foundational public health is around $140 million per year. Sen. Ron Muzzall, a swing district Republican, voted against the bill in committee. He is concerned that carriers will pass the tax along to consumers. Republicans argue that revenue for foundational public health doesn’t have to come from the health care sector.

Rivian, a Michigan-based Tesla competitor, is backing legislation that would allow electric vehicle manufactures to sell directly to customers without working through franchise auto dealerships. Rivian is on the cusp of introducing three new products, one being an electric delivery vehicle ordered by Amazon. I spoke with James Chen, Vice President of Public Policy at Rivian, to hear more about Rivian’s push for direct sales and how it intersects with the public policy landscape in Washington.

“As we roll out this model, we are discovering that there are a number of states – surprisingly states like Washington that are at the forefront of recognizing that transportation is the single largest source of emissions – that don’t recognize that direct sales is a key part of fighting this. Franchise dealers don’t have an interest in selling EVs.”

After a spirited public hearing last week and with Rivian expected to go public this year, this legislation could very well return next session.