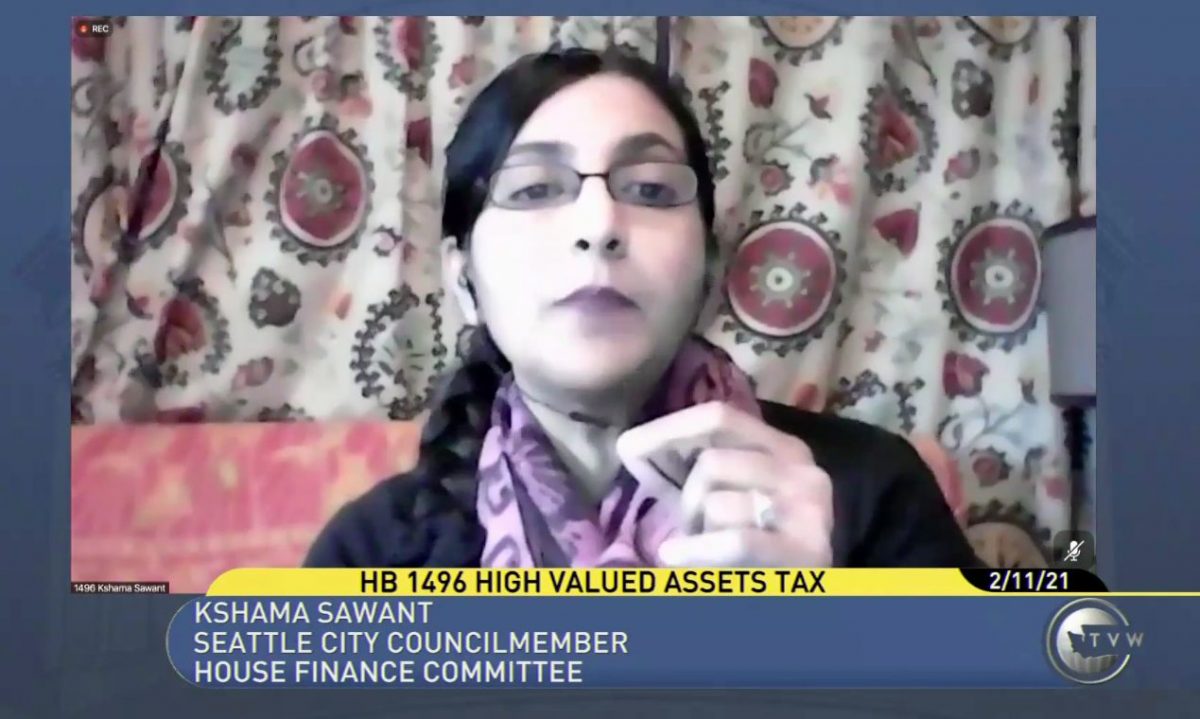 We had a couple issues of decorum last week that I didn’t gavel virtually. So I’m going to ask folks to really honor decorum. My virtual gavel is the mute button and I’d like to not have to use it today so let’s stay focused on the policy today as we talk through the bill.”

Frame was able to get through almost the entire hearing without pressing mute. When she did press mute, the testifier on the receiving end was Seattle City Councilmember Kshama Sawant.

The dispute between the officials is a continuation of a criticism that Sawant, a Socialist, has leveled against Democratic state legislators this session and last. Sawant has claimed that Democrats in Olympia are attempting to preempt, limit, or phase out taxes passed by the City of Seattle.

First, here is a word for word transcript of the exchange between Frame and Sawant.

Sawant: To say a bill to tax extreme wealth and profiteering is overdue is a gross understatement. Systematic long-term starving of public resources has led to criminal underfunding of education, house, health care, jobs and human services. But now even during a pandemic, American billionaire’s net worth has increased by a staggering trillion dollars. Politicians in Olympia have a historic responsibility to urgently pass statewide taxes on the wealthy. I urge you to also publicly commit to enact these taxes without undermining the local taxing authority for progressive taxes. Last year, our Tax Amazon movement scored a historic victory in the Black Lives Matter Protests when thousands of community members fought for and won Seattle’s tax on biggest corporations to fund COVID relief, affordable housing, and green new deal projects. The City Council….

Frame: Councilmember can you keep your comments focused on the bill at hand please?

Sawant: It is focused on the bill at hand. Last month, state lawmakers told Crosscut that they will need to ‘phase out Seattle’s Amazon Tax as part of enacting a statewide business tax measures.’

Frame: Councilmember this is not related to the current bill.

Sawant: I’m sorry, I have a constitutional right to testify and you should not be interrupting me.

Frame: In matters of decorum, we need you focused on the bill at hand Councilmember.

Sawant: No you are completely subverting the constitution. Public comment impugning the intentions even, as you said, is completely 100 percent protected by the first amendment. Would you please let me continue?

Frame: If it is focused on the bill at hand Councilmember.

Sawant: It is focused on every bill that you will talk about on taxing the wealthy and big business. So please let me continue. Last month state lawmakers told Crosscut they will need to ‘phase out Seattle’s Amazon Tax’ as part of…

This dispute is the latest in a series of disagreements over political tactics and preemption between Sawant and legislative Democrats.

Based on numerous public statements Sawant has made in the past, the inclusion of the “Tax Amazon movement” in her testimony seemed to dovetail with her position on how progressive tax reform is achieved.

The bill that passed in the City of Seattle is a payroll tax – referred to by Sawant as the “Amazon Tax” – that went into effect on January 1st. The tax applies to businesses with over $7 million in payroll, exempting employee salaries under $150,000. Sawant and Councilmember Tammy Morales introduced a larger proposal, but it was Councilmember Teresa Mosqueda’s bill that ultimately gained traction.

In an interview with Crosscut after the tax passed in July of 2020, Mosqueda, “gave a large share of the credit to the ‘Tax Amazon’ advocates” who had been pushing for a ballot measure. But Mosqueda viewed the lack of opposition, and even support, from large companies as a central reason why the bill didn’t suffer the same fate as the 2018 “head tax,” which the city passed and then repealed in 2018.

Shortly before the City Council passed the 2020 payroll tax, Rep. Drew Stokesbary (R – Auburn) Ranking Member of the House Appropriations Committee, said avoiding a statewide version could be challenging given that companies including Amazon, Microsoft, and Expedia came out in favor of Rep. Nicole Macri’s (D – Seattle) payroll tax bill during the 2020 legislative session.

In her own interview with Crosscut after the Seattle payroll tax passed, Sawant said the tax survived “entirely because of the power of the movement.” A representative of Ethan Stowell Restaurants, who opposed the 2018 tax, acknowledged that pressure from Sawant had nudged him in the direction of supporting the more targeted 2020 tax.

Fast forward to her testimony at Thursday’s hearing, Sawant had planned to say that any discussion of statewide taxes must take movement-building into consideration.

The following is an excerpt taken from Sawant’s written testimony, which she says she planned to read before being muted at the hearing.

Undermining Seattle’s tax will not only be a setback to our city, it will be detrimental to the national momentum Seattle’s Tax Amazon movement has generated. As we speak, a movement of socialists and climate justice activists, and Councilmember Konstantine Anthony, a newly-elected progressive on the City Council of Burbank, in California, have launched a Tax Amazon Burbank movement to tax companies like Amazon, Walmart, and Kaiser to fund the needs of ordinary people.”

In a Tweet following the House Finance hearing, Sawant seemed to confirm her view that movement-building is the factor that made the Seattle payroll tax germane to testimony concerning the capital gains tax.

Later on, Frame made her own criticisms of Sawant’s political strategy known.

An amendment to preempt a local payroll tax literally would not fit into the title of the bill, which is an excise tax on capital gains,” wrote Frame on Twitter.

As of now, Seattle’s payroll tax is the only area where preemption could occur. When Sawant referred to the potential ‘phase out [of] Seattle’s Amazon Tax,’ in her testimony, she was referring to comments made by Macri regarding a statewide corporate payroll tax.

Macri’s 2020 corporate payroll tax bill, which ultimately stalled in the Legislature, was criticized by Sawant over the concern that it might preempt Seattle from enacting its own similar taxes.

The Downtown Seattle Association had listed a ban on cities enacting similar taxes as a condition for backing Macri’s bill and according to the Seattle Times, “other heavy hitters hinted at the same objective: Removing Seattle’s council from the equation.”

As Macri’s bill was moving through the Legislature during the 2020 session, Sawant lambasted Democrats for “attempting to block us by trying to pass a state ban on taxing big business.”

While legislative Democrats continue to consider a statewide corporate payroll tax, they are reportedly attempting to avoid creating a “double tax” on Seattle-based companies

Macri has pointed to two ideas for doing that. The first would be for the state to gradually phase out the Seattle tax. The other would be to subtract the amount of the new state payroll tax from Seattle’s payroll tax.

In Sawant’s written testimony, she asks legislators to publicly state their opposition to “all forms of preempting, limiting, or phasing out of local progressive taxes.” In bringing up the Seattle payroll tax and her concern about preemption, it appears Sawant wanted to make that demand at the hearing.

Frame maintained that the matter wasn’t relevant to the bill at hand.