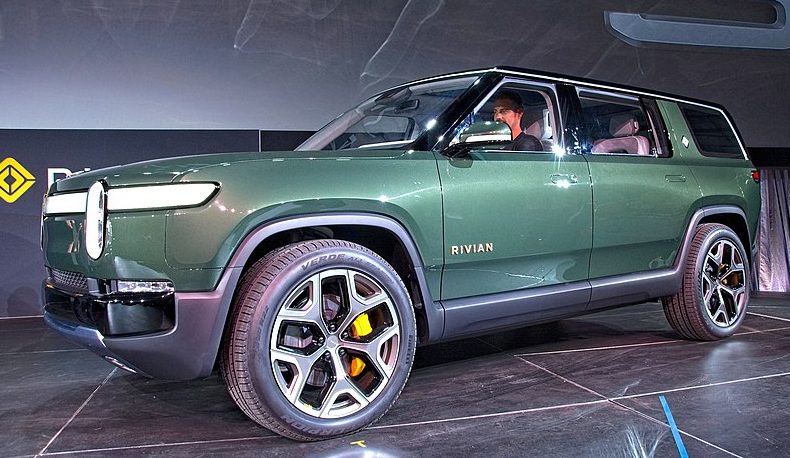 Rivian, a Tesla competitor, is backing legislation that would allow “direct sales” of electric vehicles (EVs) in Washington State. This would mean that HB 1388, sponsored by Rep. Shelley Kloba (D – Kirkland), would permit Rivian and other EV manufactures to sell vehicles directly to customers without working through franchise auto dealerships. Current state law prohibits Rivian from doing so.

Rivian, which is backed by the Ford Motor Company and Amazon, was valued at $27.6 billion at its latest funding round in January. Bloomberg reported this week that the electric-vehicle startup may go public as soon as September at a valuation of about $50 billion.

A public hearing for HB 1388 took place yesterday in the Consumer Protection & Business Committee, with a wide range of testimony both in support and in opposition to the bill. As the bill moves through the Legislature, Rivian is on the cusp of introducing three new products, one being an electric delivery vehicle ordered by Amazon.

I spoke with James Chen, Vice President of Public Policy at Rivian to hear more about Rivian’s push for direct sales and how it intersects with the public policy landscape in Washington

Michael Goldberg: What trends in the electric vehicle industry have led Rivian to push for this bill?

James Chen: We are working with other likeminded manufactures, Tesla and Lucid for example. But the trend in the industry is you’ve got these new players getting ready to introduce products and the dealer franchise model does not work for us. What we’re looking for is a way to be able to bring our products to market in a way that best suits our businesses.

This is not about skirting regulations. This is about companies like Rivian coming into Washington and saying, we want to have a license and we want to invest in the state. We will apply for and abide by the regulations that apply to dealers. Let us apply for that license and be regulated as a Washington entity.”

Michael Goldberg: Why is “direct sales” so important to Rivian’s business model?

JC: Our approach and philosophy on sales is as a direct sales company. We would like to set up our own show room and interact directly with customers. This is not an anti-franchise dealer philosophy, it’s just what fits with our business model best.

Our vehicles are, with the owner’s permission, connected cars. That connection is about ensuring the vehicle is operating at its optimal efficiency so that when it runs, the energy between the cells is balanced appropriately. If an issue arises, we’ll be able to remotely diagnose it. We’ll also be able to enable new features through software updates without having to go through a third party who will not know the vehicle as well as the company that designed, iterated and produced that vehicle.

MG: Can you provide specific examples of the opposition franchise dealers have mounted against EV direct sales?

JC: As we roll out this model, we are discovering that there area number of state’s – surprisingly states like Washington that are at the forefront of recognizing that transportation is the single largest source of emissions – that don’t recognize that direct sales is a key part of fighting this. Franchise dealers don’t have an interest in selling EVs. A 2019 Sierra Club study found that a large percentage of franchise dealers weren’t even selling electric vehicles if their manufactures even offered them. And those that did were not giving accurate information and did not have the vehicles ready to be shown.

I think there is no better example than last year as General Motors is shifting more and more toward EVs, it said to its dealers, ‘we want you to invest about $200,000 to get ready for the EVs that are coming.’ Instead of doing that, 150 of them actually took the pay out instead. They were willing to sell their franchises just so that they didn’t have to invest in EV technology.

We do know that dealers make the bulk of their profits off of service, and service off of internal combustion engines. So oil changes every 3000 miles, engine tune ups, spark plugs, transmission fluids; these vehicles are coming back to dealerships to or three times per year. Over half of dealer profits come from this service approach. Electric vehicles aren’t going to provide this. The most frequent wear items are tires, windshield wipers and washer fluid.

MG: How did these statutes in various states come to be?

JC: There are roughly 19 states that do allow companies like Rivian to sell directly. These are companies that do not have franchise dealers they would be competing against.

Going back to the 1940s and 50s, dealerships were small mom-and-pop operations. Laws were put in place to protect them from the predation of the much larger manufactures, who were prevented from being able to unfairly compete with their affiliated franchise dealers. Fast forward to today, those mom-and-pop shops are now themselves multimillion and in some cases multibillion dollar corporations with a lot of political influence.

In some cases, members of these family run empires are legislators, not just friends of legislators. They’ve had the ability to create laws that prevent any manufacturer from being able to sell, effectively shutting down states to this additional investment and to the choice manufactures used to have.

MG: How has the regulatory landscape in Washington evolved in this area?

JC: Washington used to be an open state. In the 2013-2014 timeframe, the Washington Auto Dealers Association wanted to shut the door behind Tesla.

Tesla had a store at the time so basically a deal was cut between Tesla and the Association before the Legislature where Tesla would be grandfathered in and could sell directly, but nobody else could. To this day, Washington only allows Tesla to sell directly. The solution Rivian is proposing is very targeted: it would apply to manufactures that are devoted solely to EVs that are not competing with any affiliated franchise dealers.

We find it puzzling that a state like Washington is so reluctant to the idea of allowing an American company producing vehicles in the United States from being able to invest in Washington and open up a show room and be able to sell directly to Washington consumers.”