A surprising move to repeal Seattle’s head tax, budget questions about Washington’s nearly 20-year-old culvert case, and lessons from California’s primary election are all teed up in this week’s edition of the Morning Wire. You can follow our coverage throughout the week at www.washingtonstatewire.com.

And as always, you can sign up here for our Daily Wire email that is out M-F at 7:00 am.

With help from DJ Wilson and Kylie Walsh

After news broke that DHS had transferred as many as 120 immigrant women to the Federal Detention Center (FDC) in SeaTac and separated them from their children, Washington State leaders called on the federal government to end their “zero-tolerance” policy on prosecuting immigrants who enter the country illegally.

Despite these calls to action, Jorge Baron, Executive Director of the Northwest Immigrant Rights Project (NWIRP), says little has changed. NWIRP is still in the process of trying to connect parents to their children, inform individuals of their legal rights, and connect them with immigration resources. Baron says he commonly hears the questions “How long will I have to stay here?” and “Where are my children?” from the parents inside the FDC, but in a situation that he describes as “unprecedented,” he is unable to give them an answer.

Based on California’s primary election results, it appears that to win a competitive Democratic nomination for President in 2020, a candidate will need to have some proposal for a single payer-like health care system. That could be Medicare for all, or a buy-in option for Medicaid, or a full embrace of single payer like Gavin Newsom has made. He won the primary on the back of a single payer policy proposal.  This idea about single payer is one of the three key implications for national elections that come out of the state.

That said, we’re almost as sure that a single payer model is a poison pill for a general election electorate. In other words, to get through a Democratic primary, a candidate may need to embrace a policy that will sink him/her later that fall. We’ll see.

Notably, also, is this:  if a blue wave is going to form in 2018, a place like California is where it should swell the highest. Instead, only 27% of the electorate has return a counted ballot, well below the average primary turnout of 37% since 2006.  Sure, it’s a primary and there is a long way to go until the general.  But, that doesn’t look like a wave, particularly in a blue state with a competitive gubernatorial contest.

In a surprising move, the repeal of Seattle’s head tax isn’t likely to come from a referendum, but instead from the City Council that passed the tax unanimously less than a month ago. Over the weekend, the “No Tax on Jobs” campaign celebrated its collection of the necessary number of signatures to get its head tax repeal referendum on the ballot. Then on Monday afternoon, the Seattle City Council scheduled a special meeting to consider legislation to repeal the head tax.

Mayor Jenny Durkan and seven members of the City Council quickly issued a joint statement stating that they would move forward in considering the appeal in an effort in order to avoid a “prolonged, expensive political fight over the next five months.” Noticeably missing from the joint statement were Councilmember Teresa Mosqueda who says she will not vote to repeal the tax, as well as Councilmember Kshama Sawant who called the repeal a “capitulation to bullying by Amazon & other big biz” and a “backroom betrayal.” The special council meeting is scheduled for today at noon and will be webcast here.

The Seattle City Council advanced a new education levy out of committee to replace the city’s expiring preschool and education levies. Over seven years, the proposed levy would bring in $637.8 million – and would cost the median homeowner about $112 more per year compared to the expiring levies.

Of the $637.8 million, 54 percent is slated to go toward preschool and early learning to help expand access to preschool by nearly 1,000 children per year. Twenty-nine percent would go toward K-12 investments including academic tutoring, job exploration activities, and college advising and guidance. Eleven percent would go toward health programs such as new student health centers and access to services for students experiencing homelessness, and the remaining six percent would be dedicated to the Seattle Promise program. The ordinance will go before the full council on Monday, June 18 at 2pm.

Washington’s long-running culvert case has finally come to a close with a 4-4 vote affirming the 9th Circuit Court of Appeal’s ruling. The Supreme Court’s split vote rules the state responsible for fixing and replacing hundreds of culverts throughout the state costing billions of dollars to protect salmon migration. But the question of who will foot the bill remains. In former Attorney General Rob McKenna’s amicus brief in the case, he wrote, “it will likely be the counties, cities, and even private citizens of Washington who will have to fund the removal and replacement of thousands of culverts.”

There is also the question of the impact this will have on salmon. The ruling only applies to state-owned culverts. In AG Ferguson’s statement following the ruling, he noted that King County-owned and federally-owned culverts (which are unaffected by the ruling) block many of the state’s culverts and will continue to impede salmon migration if they are not repaired.

On Friday, House leadership met to discuss findings from the outside investigation into Rep. David Sawyer’s workplace conduct. The report finds that Sawyer created an intimidating and offensive work environment for two women based on their gender or sexual orientation. Sawyer also sent inappropriate text messages and improperly used the women’s time by discussing his frustration with the investigation. A summary accompanying the investigation notes that Sawyer was cautioned about his behaviors to which he responded he was “not the one who would get fired.”

Sawyer filed for re-election at 9:03 am on the first day of filing week despite calls from House Majority Leader Pat Sullivan and several Pierce County politicians not to seek re-election. On Monday Sawyer released a statement apologizing to the individuals he made “uncomfortable” and says he commits to changing his behavior, but made no mention of his re-election plans. Last night the Pierce County Democrats voted to endorse his opponent Melanie Morgan. 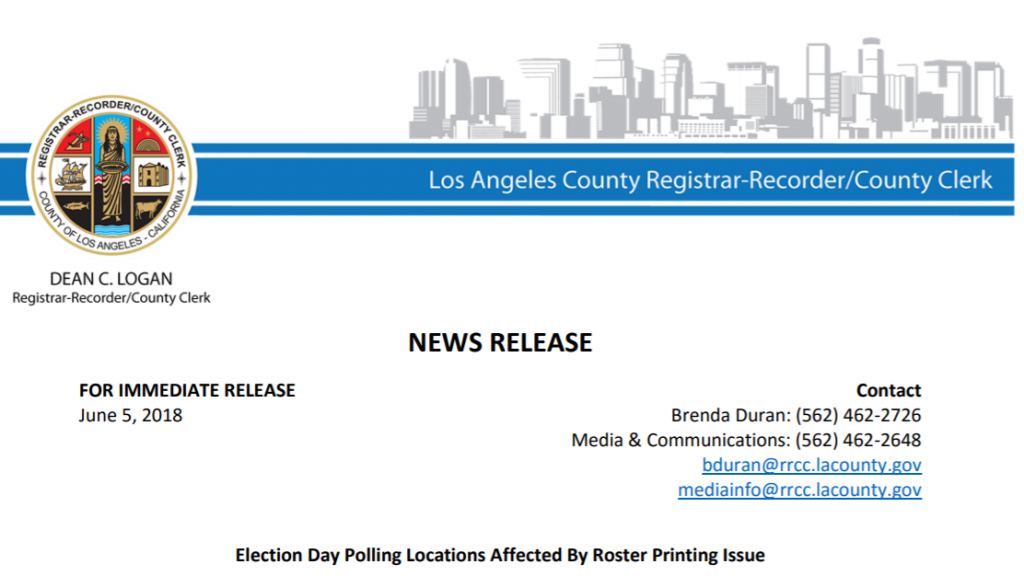 If you’ve forgotten the story of the 2004 gubernatorial election, and the recounts, manual and otherwise, then you have probably forgotten this name:  Dean Logan.  He was the head of elections at King County which found 573 uncounted ballots days before the last recount was completed.  After two counts with Rossi the winner, Gregoire won the final ballot count.  Dean Logan now holds the same job in LA County where last week the county failed to deliver 118,000 ballots.

The ghost of 2004 lives on – in both Los Angeles and in Washington State.  Dino Rossi is now running for the 8th Congressional seat. And, Gregoire’s attorney in the 2004 legal battle?  She’s now the Mayor of Seattle. You can read this story about it by a Times reporter that is now Gov. Inslee’s Chief of Staff.