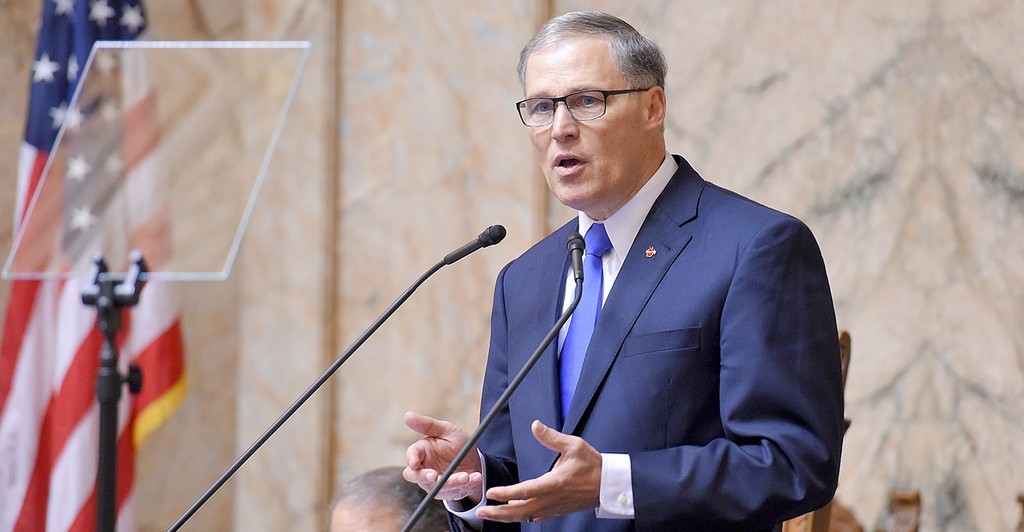 Before Washington’s 105-day 2019 regular legislative session began, Gov. Jay Inslee held a series of press conferences naming specific initiatives he’d be supporting — he also enumerated a list of legislative priorities in his State of the State address. To support some of those efforts, the Office of the Governor formally requested legislation.


Session is scheduled to end Sunday, April 28. With a little over two days left, legislators have done the legwork to get a majority of those bills over the finish line. Counting each pair of companion bills as one bill:

Two are still alive and on the verge of passing, following conference committees.

Three have died, with their ideas living on in other bills.

Only one idea is, seemingly, dead for the session.

“This has been a very productive session and the governor is pleased that the legislature is also prioritizing clean energy, behavioral health, orcas and other crucial issues facing the state,” Tara Lee, Deputy Director of Communications for the Governor’s Office, said in an emailed statement.

Eliminating hydrofluorocarbons and establishing a clean fuel standard were two other key components of Inslee’s environmental agenda this session. While Inslee didn’t formally request it, a bill related to HFCs (HB 1112) is on the governor’s desk. HB 1110, a bill establishing a clean fuels program, passed through the House and is in the Senate Transportation Committee. And SB 5971, another clean fuel standard bill, had a public hearing Friday.

All three of the orca-recovery bills Inslee formally requested have passed through the full Legislature:

SB 5063, which requires return envelopes for all ballots to include prepaid postage, is on the governor’s desk and waiting for a signature.

SB 5511 takes several steps to expand access to broadband throughout the state, including: creating the “Governor’s Statewide Broadband Office” as a centralized planning body for expanding access, requiring the Public Works Board and the new office to create a competitive grant and loan program, creating a Statewide Broadband Account for, among other uses, funding those grants and loans, and authorizing Public Utility and Port Districts to provide temporary services to customers if their Internet service provider stops providing service.

The bill passed through both chambers and is headed to the governor’s desk.

SB 5526 has passed through both chambers and is now in conference committee after the Senate refused to concur with House amendments. Sen. David Frockt, the bill’s prime sponsor, said he wouldn’t take the non-concurrence as “a hostile act by the Senate;” rather, he confirmed it as a way to extend workshopping on the bill and to “get things lined up” between chambers.

If the conference committee’s compromiseis ultimately adopted by both chambers, the bill — also known as “Cascade Care” — would set up a public option for health insurance in Washington State.

To learn about the bill’s evolution, read our coverage from Inslee’s initial announcement of the policy, its first public hearing, how it and its companion began to diverge mid-session, what health plans think of the idea, and an in-depth interview with Sen. Frockt about the bill from earlier this month.

Gov. Inslee also put a priority on behavioral health reform this session. All four bills formally requested by the governor’s office related to behavioral health have passed in both chambers They include a bill sponsored by Speaker Frank Chopp to establish a behavioral health teaching hospital within the UW School of Medicine and a bill implementing the requirements in the Trueblood settlement.

The governor’s office also requested a comprehensive bill addressing the opioid epidemic as part of Washington’s statewide opioid response. The bill includes a broad range of provisions, such as requiring prescribers to discuss the risks of opioids with certain patients, requiring jails to provide medication-assisted treatment if funding is available, and mandating that the DOH, the HCA, and other agencies work together on a “statewide approach in addressing opioid use disorder.”

The bill passed unanimously in the Senate in March, and passed on a 96-2 vote in the House in April. After the House adopted amendments prohibiting the HCA from promoting or partnering with agencies that oversee supervised injection sites, the Senate refused to concur with the House version. The conference committee’s report was adopted by the House unanimously, and now needs approval from the Senate.

A separate bill requested by the governor related to early learning died earlier this session. The bill (HB 1771/SB 5683) would have established the “Welcome to Washington Baby Act.” The act would’ve created a universal home-visiting program designed to assess newborns’ health, safety, progress, and educational benchmarks. The visits would also connect families with resources to address their, and their newborn’s, needs. Both the House and Senate version of the bill died after passing out of their policy committees in February.

Inslee’s other bill, SB 5327, would establish a multi-agency work group to coordinate career connected learning (CCL) opportunities for students in Washington. CCL opportunities connect classroom learning with work-based learning, such as apprenticeships or job-shadowing, to better prepare students for the workforce. This bill would have also established a grant program to expand CCL opportunities.

Ideas from both bills are included in Rep. Drew Hansen’s higher education bill that passed in the House Committee on Appropriations Thursday evening.