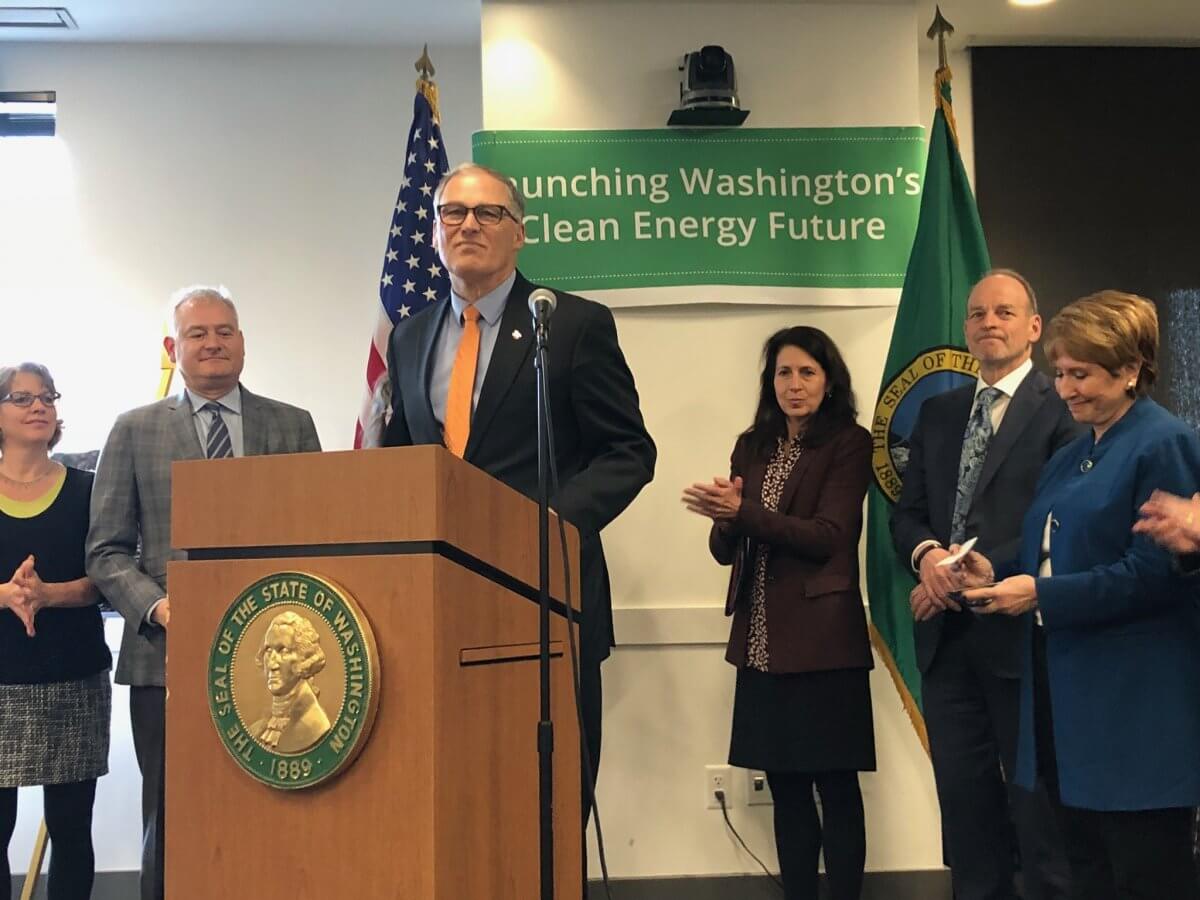 Washington Governor Jay Inslee announced a package of clean-energy legislation and investments at a press conference today. The package includes $268 million in investments and several policy initiatives that, in combination, Inslee said would reduce greenhouse gas emissions to 25 percent below 1990 levels by 2035 — a target set by the Legislature in 2008.

Every piece of policy in the plan would require action by the Legislature to implement.

The Governor divided his plan into five focus areas:

According to the Governor’s policy brief, initiatives include: making electric vehicles more accessible for consumers through sales tax incentives and discounts in some cases, making Washington a Zero Emission Vehicle (ZEV) state (which would require automakers to manufacture zero-emission vehicles), giving utilities authority to build charging stations, and requiring charging stations on some new buildings.

Several initiatives, and a little over $78 million in investments, within Inslee’s plan address construction of energy-efficient buildings or retrofitting existing structures.

For new buildings, the summary of legislation provided at the press conference describes establishing a “stretch” building code for local governments to follow if they want to “stretch” beyond existing codes to reduce energy use. Inslee’s plan also involves working net-zero carbon structures into state investments — including 750 affordable-housing units through the Housing Trust Fund and four schools through the K-12 construction budget.

The main piece of clean-energy legislation from Inslee will be a “100% Clean Energy bill” that eliminates coal power – out-of-state included – by 2025 and requires Washington utilities to “start transitioning to a carbon-neutral electricity,” such as solar or wind power, by 2030 and eliminate fossil fuels from their supply entirely by 2045.

Policy-brief documents say the Governor’s budget will invest about $59 million in clean energy, most ($52.5 million) going into the Clean Energy Fund, which funnels money to projects and research related to clean-energy technology. Additional money will boost the solar incentive program and a 10-year extension of “the sales and use tax incentive for renewable energy machinery and equipment.”

The Governor is providing $1.4 million for the Department of Ecology to administer a clean fuel standard (CFS). Under the CFS, fuel providers would have to reduce the carbon in their fuel blends by 10 percent by 2028 and by 20 percent by 2030. Providers would be allowed to replace carbon with any alternative fuel that meets “the average standard,” after being assessed for emissions from production to consumption.

Inslee is providing a little under a million dollars to “implement a plan to phase out HFCs,” a reaction to President Trump’s rollback earlier this year of a protocol that would’ve phased out HFCs.

“This is a meaningful step of legislation,” Carlyle said. “This is a package that, in aggregate, makes a dramatic impact on the march toward reductions that get us in the direction of the Paris Accord. People are passionate about it, they want to see us be fiscally responsible, meaningfully connected to substantive policy that makes a difference, and invest responsibly.”

Carlyle also said that the alignment among the Governor and the two chambers of the Legislature to implement these bills was “unprecedented.” After the press conference, though, he was clear that the initiatives will still be met with plenty of resistance.

Sen. Doug Ericksen, who’s the ranking Republican on the same Senate committee, brought up several concerns he had about Inslee’s proposals. In regard to the clean fuel standard, Sen. Ericksen said that the effort is “simply a carbon tax in disguise,” and expressed concern about its implementation, given that I-1631 was voted down by a 57 percent majority in November’s general election.

At the press conference, Inslee said that states already implementing a clean fuel standard have seen “no discernible increase in fuel costs.”

“I hope Jay Inslee isn’t trying to use the people of Washington State for his Presidential campaign,” Ericksen said. Ericksen argued that Inslee’s initiatives would lead to fewer jobs and high energy costs, which wouldn’t “help him with his national ambitions.”

According to the Governor’s website, Inslee “will detail additional investments related to climate change and ocean acidification” on Thursday, when he rolls out his proposed budget.