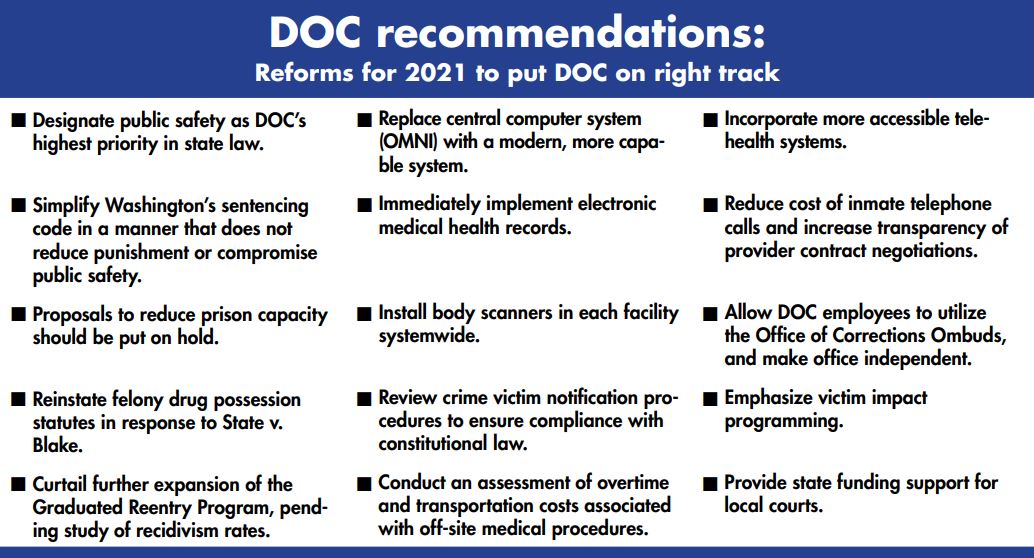 Leaders of the Senate Republican Caucus have released a report on Washington’s prison policies, calling for the state Department of Corrections to adjust its priorities.

The report was released during a Sept. 15 press conference with Republican Sens. Mike Padden, Chris Gildon and Keith Wagoner. The lawmakers criticized several recent policy decisions by Gov. Jay Inslee, the Democratic-majority Legislature, and the Department of Corrections, including the release of more than 1,000 prisoners to reduce crowding during the pandemic.

“We know that the Department of Corrections’ main mission is to ensure public safety,” and provide rehabilitation and skills as a secondary objective, Gildon said. “Unfortunately, we have been releasing persons before they have had sufficient time to gain those knowledge, skills and abilities.”

The report discusses several recommendations made by the Senate Law and Justice Committee in 2016, and whether they were implemented or not, as seen in this photo from the report:

The current report again calls for the Department of Corrections to designate public safety as its highest duty. This request was included in a provision of a 2017 reform bill that was never enacted.

The current recommendations from today’s report can be seen below:

Many of the current recommendations are in response to recent court decisions, like the Blake Decision and the ensuing legislation that in turn decriminalized drug possession in Washington, and then recriminalized it, but reduced its severity from a felony to a misdemeanor charge. Opinions are divided, with some lawmakers viewing it as progress towards reforming the justice system. In the report, Senate Republicans are recommending that the state reinstate felony drug possession statutes.

Since the pandemic began, there has also been a push to reduce capacity at prisons, which has led to consolidation. The report recommends stopping that population reduction.

“We need to freeze this idea of downsizing now,” Wagoner said.

The Senate Republican report states that currently, the prison system is at roughly 75% capacity, with roughly 14,000 prisoners incarcerated, down from roughly 17,000 in 2016.

Criminal justice system and police reform are shaping up to be hot topics in the upcoming 2022 Legislative session. A series of police reform bills that passed this year are likely to be adjusted to clarify what police can and can’t do, and what non-lethal weapons they’re allowed to use. While Democrats are open to making revisions, they likely won’t go far enough to satisfy Republican lawmakers, who are calling for a special session to address the bills.

A copy of the Republican report can be viewed below: