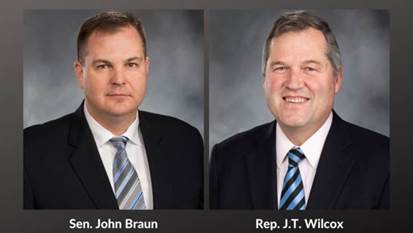 Senate Republican Leader John Braun, R-Centralia, and House Republican Leader J.T. Wilcox, R-Yelm, issued the following statement in response to continued Democrat insistence in the press that law enforcement and legislators are overreacting to controversial new laws on policing that lack clarity and endanger the public, police and first responders.

“Our offices have received emails from people who are not just concerned about the effects of House Bills 1310 and 1054, but are seriously afraid for their safety and the well-being of their family members. We have also heard from local government officials who have questions about the ambiguous and conflicting language of the legislation. It’s telling that Democrats are dismissing the concerns and feedback from those with a lifetime of law enforcement experience who are being honest and forthcoming in their assessment of the current situation.

“Although legislators make decisions on behalf of the public all the time, it’s elitist and condescending for those who support these bills to ignore the suffering we are seeing across the state and assert that they know best. Nothing is more important than public safety. It’s foundational.

“Some have pointed out that members of law enforcement were consulted in the process of developing the legislation – as if that makes law enforcement complicit in the harm the laws are doing. In reality, law enforcement’s hands were tied. They tried to engage in the process knowing it was not likely to result in substantially improved policy – they were instead hoping for the least-harmful bills possible, knowing the majority could pass whatever they wanted. And that’s what they did. Democrats passed exactly the bills they wanted over the objections of citizens, Republican legislators and many in law enforcement.

“The sponsor of the bills now apparently says that fixes are needed. We could not agree more. Republicans have called for a special session to address this matter and are ready to contribute to bipartisan, reasonable revisions right away. The legislation never should have passed in its current form. Democrats didn’t want substantial ‘fixes’ during the process because they felt they already knew the right answers. Now they’ve had to ask the attorney general to rescue them from a fiasco that might have been avoided if they hadn’t been in such a rush. That’s no way to make good policy.

“Public safety is a priority for Republicans. We will continue to be supportive of legislation that is balanced. But when considering policies, those with decades of policing experience must be more involved. Their expertise should be drawn upon, not dismissed. We all want members of law enforcement to be accountable and respectful to the neighborhoods they serve. But hamstringing their ability to protect the public and themselves is wrong and dangerous.”