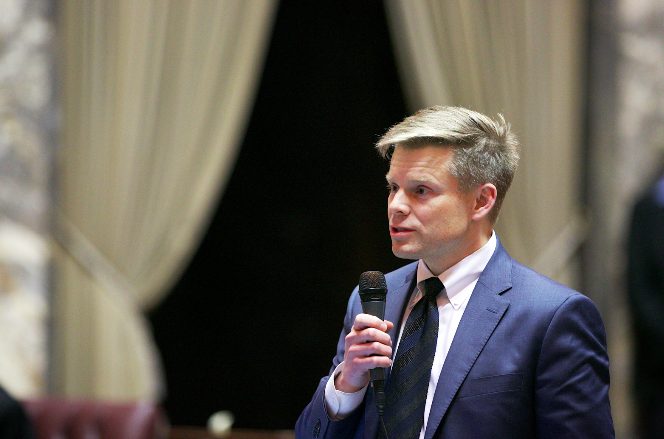 Sen. Jamie Pedersen represents the 43rd District in the Legislature and serves as the chair of the Law & Justice Committee. He also serves on the Ways & Means Committee, the Early Learning and K-12 Education Committee, and the Rules Committee.

I called Sen. Pedersen earlier this week for his take on a few topics animating the policy conversation surrounding economic recovery in Washington State. We discussed debates over tax reform, when the Legislature should return for a special session, how this economic downturn compares to the Great Recession, and the political context that will shape the next few months.

*Note: This conversation took place earlier this week before specifics were known regarding the Washington State Economic and Revenue Forecast Council’s projection of $8.8 billion in state-government revenue losses over the next three years.

Michael Goldberg: From the perspective of a state legislator, I’m wondering if you could compare this economic downturn with the Great Recession. In terms of the actual economic conditions as well as the political context in which the downturn is unfolding, what do you make of comparisons between then and now?

Sen. Jamie Pedersen: We should begin with getting a sense of scale. There’s all sorts of breathless reporting about how this dwarfs the Great Recession. When I hear that, I kind of cock my head to the side and think, ‘really?’

Number one, going into the 2009-2011 budget, we had a shortfall of $9 billion over two years on a $36 billion budget. So, literally 25% of our revenue disappeared. Number two, we were in the middle of the McCleary litigation and $23 billion or so, if memory serves, of that money was constitutionally protected or federally mandated. The third gigantic handicap was that we were hobbled by these Tim Eyman initiatives that purported to require two-thirds majorities to raise taxes.

With zero Republican support for any tax increases – including eliminating loopholes from existing taxes – outside of federal aid, our only choice was to cut. Our situation this time is dramatically different. Unlike the situation at that time, by June 30th 2023, we’re going to have in excess of $4 billion in the budget stabilization account. So you deduct $4 billion from whatever the shortfall is. It starts to seem much more manageable when you think about the budget stabilization account and a combination of some additional revenue and some cuts.

Due to the lawsuit Laurie Jinkins, David Frockt, and I did about eight years ago, we are no longer subject to the two-thirds requirement. With a simple majority, we can raise revenue [through tax increases] and have that be part of the solution.  And frankly, we’re going to have some additional spending that we want to do, whether that’s in public health or increased support for broadband.

By the way, I think there’s a better than average likelihood that we wind up with a Democratic president and a Democratic Congress. In which case, if we had, say, a $250 billion dollar congressional aid package for states, our per capita share of that would be roughly $5 billion. So, if we have $4 billion in reserves and we get $5 billion from the federal government, the challenge doesn’t look as daunting.

In the big picture, I think one of the lessons we learned from the last time around is that using this austerity frame, it makes sense at the level of an individual household, but it doesn’t make sense at the level of the economy because growth is about the circulation of dollars in the economy. If you lay off a bunch of government workers or reduce payments for people or different things that you might do in terms of cutting the budget, that’s just going to reduce the circulation of money in the economy and hamper recovery.”

MG: What specific type of tax reform do you think is feasible in the near future? Also, can you offer your perspective on the notorious “is a capital gains tax an income tax debate?”

SJP: The current Supreme Court precedent says that income is a form of property, and therefore, the constitutional limitation on property taxes (the 1% cap and uniformity requirements) would apply to an income tax.

So, we could do a flat 1% income tax and it would be completely constitutional. There’s no reason why we cannot do that right now. The problem is it doesn’t raise that much money and it would be wildly unpopular, I suspect. So no legislator has rushed to do that. What people who want tax reform and look to other states as models – Idaho for example – would like to see is a modest, graduated income tax that has a pretty high exemption level, so that something like 90% of people are not affected by it. The remaining 10% would pay more and more depending on how much income they have. Doing something like that would require a constitutional amendment and therefore, a two-thirds majority which we certainly don’t have in the current Legislature.

Pretty much all of our existing taxes, other than the property tax, were created during the Great Depression after the Supreme Court struck down the voter approved income tax. The sales tax, b&o tax, real estate excise tax, they are all basically taxes on transactions. So, what causes you to have a capital gain? Well, it’s because you sell an asset.

I feel a really high degree of confidence that if a bill came to the floor and there was a point of parliamentary inquiry – ‘Mr. President, is a capital gains tax an income tax, requiring a two-thirds majority?’ – I’m confident that the presiding officers in the House and Senate would respond by saying that it is an excise tax and requires a 50% vote. The more important question is what the court would say in the long-term. I think there’s a good chance the Supreme Court responds that a properly structured capital gains tax is an excise tax, and therefore permitted to be subject to the 1% cap and uniformity requirements.

So to summarize, we can’t do a progressive income tax without a two-thirds majority, which I think is unlikely to materialize. But on the other hand, I think a capital gains tax is very possible.”

MG: What challenges would conducting a special session during an ongoing public health crisis pose?

SJP: Well, I think one of the big learnings for me in this time about the strengths and weaknesses of different branches of government is that the biggest strengths of the legislative branch are really hard to carry out in a public health emergency.

We do our best work when we have big, inclusive stakeholder processes followed by public hearings with a lot of testimony; when we can talk to people both in big groups and little discussions in our offices, and then legislators get together and debate things for hours. All of these things are dangerous in this context. You can replace some parts of that with remote technology, but it will compromise our ability to do the work I just mentioned.

All that said, I think everybody in the Legislature is willing to come back if there are things that need to be done immediately. So for example, if the governor has told us that we’ve got such a severe cash crunch and we’re not going to be able to pay our bills unless we give him the authority to release more money from the budget stabilization, then I think people wouldn’t hesitate and figure out how to have a special session. They’ve told us that is not the case, that the state does not have a cash flow problem before the Legislature is scheduled to return in January.

Now, we may benefit from being able to have a legislative appropriation of some of the federal dollars that have already come in. So that would be a worthy reason for a special session. There may be some policy things we could do, police reform for instance. But the regular session is not that far away. And then, you can’t ignore the reality that we are now basically four months away from ballots dropping and having the voters choose a new Legislature. We are going to get very important signals from the voters about what they want.

MG: Can you give me your assessment of the political context surrounding a potential special session and Washington State’s economic recovery more broadly?

SJP: I think we’re going to have a larger majority after the election, and that we’re going to have, essentially, a blessing from those voters to proceed with progressive tax reform and a balanced approach to the budget. Voters are having these exact conversations about what they want the government to do and how they want it to respond to the crisis. I think we are going to get a strong signal from what the composition of the legislature is. If we come back with 31 members and the Republicans have 18, and Inslee beats Eyman 65-35, I think that’s a pretty strong signal about the direction that the voters want us to go. Then if voters think we did the wrong thing, we’ll have a check on that in 2022. But my intuition is that people would like to see progressive tax reform and increased investment in public health, not solving the budget by cutting aid to higher education or state employee salaries.

If there’s not an urgent argument for why you have to come back in session to bail out the state, frankly, voters through their ultimate power of the constitution have established when we’re supposed to be in session. They want us to be a part time Legislature convened every January and in the odd years, for 15 weeks to do a budget for the next two years. So, that’s what we will do. If the right answer is for us to come back into special session, I think that’s fine. But also, I think what we’re going to do ought to be tightly defined. It’s not a regular session. The whole point would be to get in, get a bunch of stuff done and leave. I don’t feel like we have enough consensus around what the things are that we would do, and we need that to ensure it would be productive to bring us all together.”