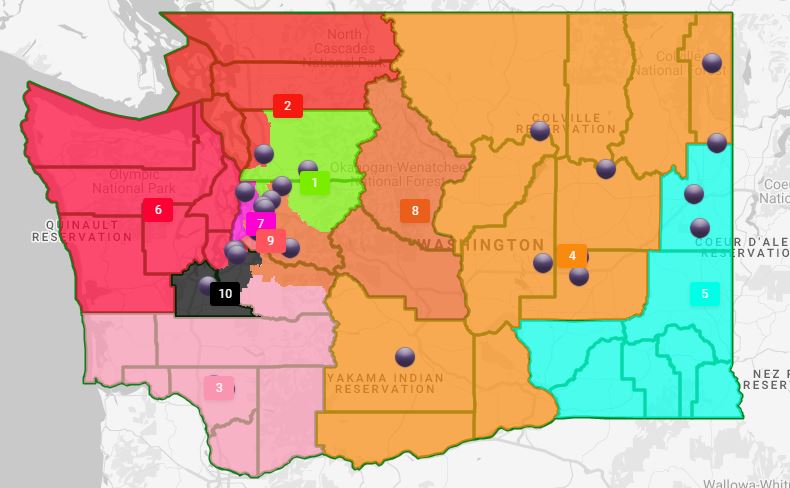 Proposed Congressional District maps were released yesterday, and voters in the 1st, 2nd and 8th districts should be paying particular attention.

Washington State didn’t pick up any seats in the House during this Census cycle, which means the Redistricting Commission was tasked with adjusting boundaries to the current 10 districts. Some proposed changes would dramatically reshape districts, while other districts like the 5th would remain relatively untouched. For information on Legislative District maps that were released last week, check out our previous coverage here.

One of the most interesting districts here is the 8th CD, which currently runs from Seattle’s Eastside suburbs and eastern Pierce County across the Cascades, where it encompasses both Kittitas and Chelan counties. It’s currently held by Democrat Kim Schrier, who beat her Republican challenger by less than 15,000 votes in the 2020 election.

Three of the maps keep the 8th CD running across the Cascades, those of Democratic-appointed commissioners April Sims and Brady Piñero Walkinshaw and Republican-appointed commissioner Joe Fain, although Fain proposes incorporating much of the current 1st CD in northwest Washington into the 8th as well.

Republican-appointed Paul Graves offered perhaps the most dramatic reimagining of the district, moving it to the south, nearly to Olympia, and running to North Bend before ending along the Cascades. Since only three commissioners need to agree on final maps, it seems likely that the 8th will remain a cross-mountain district. The 8th CD needs to shed nearly 10,000 people.  The question then becomes how to adjust it, and the answer seems to be shifts on the western portion of the district.

Both Democratic plans extend the 8th CD into downtown Bellevue, with Walkinshaw’s plan going as far as including Mercer Island. To make up for this, both seemingly removing Auburn from the district.

Walkinshaw’s Mercer Island plan can be seen below:

Fain’s plan would remove Issaquah, but greatly expand the district to the north, and include eastern portions of Snohomish, Skagit and Whatcom counties.

Fain’s 8th CD can be seen below:

Graves’ plan for the 8th can be seen below:

While there’s some border adjustments between the 4th and 5th CD in Franklin and Adams counties, only Walkinshaw’s plan would significantly redraw the districts’ borders. In his proposal, Walkinshaw proposes including Lincoln, Ferry, Stevens and Pend Oreille counties while removing Franklin.

Walkinshaw’s proposal can be seen below:

Back in western Washington, major changes are likely in store for the 1st and 2nd CD. Both Democratic maps expand the 2nd CD to incorporate Whatcom and Skagit counties, while shrinking the 1st CD to include east Snohomish and portions of north King County.

Both Republican commissioners are also planning on making significant changes to the districts as well, as can be seen in the maps below. Perhaps most striking is Graves’ proposal to place Kittitas and Chelan counties in the 1st CD, as seen below:

Fain’s plan would expand the 2nd CD to include the western portions of Whatcom, Skagit and Snohomish counties and consolidate the 1st CD to Lynnwood and surrounding areas in the north, to Redmond and northern parts of Sammamish in the south. That can be viewed below: