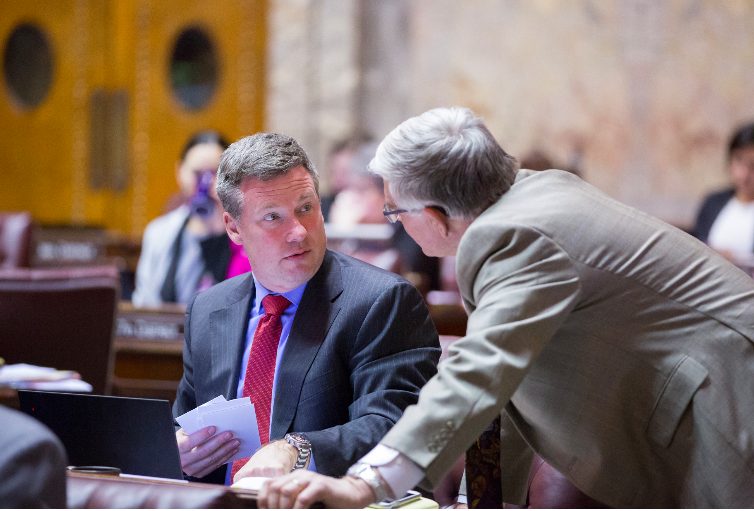 Senator Mark Mullet, a Democrat from Issaquah, has pre-filed a bill with Senator Lynda Wilson, a Republican from Vancouver, that would subject all gubernatorial emergency orders to legislative approval after thirty days.

Pre-filed on December 24th, the bill arrives at a moment when Mullet says there is uncertainty among the business community about whether current restrictions imposed under the governor’s “Stay Safe, Stay Healthy” order will be extended past the January 4th expiration date.

The pre-filed bill also arrives after legislative Republicans announced that they would attempt to curtail some of the governor’s emergency powers to extend proclamations and enact new spending measures.

It’s just asking for four-corner approval after thirty days, which is what we have for a lot of the proclamations right now. The proclamations have been coming back and getting extended since March. So, they’ve had four corners sign off on all these things. I think there are a lot of emergency orders where it’s pretty clear we want to keep them in place. And there’s a pretty effective process to do that,” said Mullet. “I think we’re just saying that, you know, I guess for me, specifically, with the latest round of business closures, I feel like those are big, giant, important decisions that impact people’s livelihoods and their lifetime savings. I totally think you should have the ability to do [these orders] for the thirty days. But beyond that, I think they should have a broader discussion with the Legislature. These are some of the most important decisions that were made in Washington State in the last fifteen-plus years, and they were made without the Legislature having any input.”

Thirty day approval from the Legislature is already required for certain gubernatorial powers, such as waiving the Open Public Meetings Act.

As Mullet pointed out, legislative leaders from both chambers did sign off on some of the orders issued in response to the COVID-19 pandemic. This bill, Mullet says, would require every order to go through the same signup process to extend beyond thirty days.

I know with the business closure issue, it hasn’t been subject to that rule … That to me is the whole main point of the bill – just making sure that when there’s huge giant, significant issues affecting the state of Washington, the Legislature, who is voted in by the people, has the ability to be involved in those decisions.”

Current efforts aimed at limiting the governor’s emergency powers follow nearly nine months of frustration for legislative Republicans, who were pushing to convene a special session. Republicans had hoped that a special session would allow them to have more influence over the state’s public health and budgetary response to the pandemic.

Along with Republicans, Mullet voiced his support for a special session – a move which he believes prompted Gov. Inslee to endorse his general election opponent.

Over the summer, some legislative Democrats said that if the the state experienced an untenable cash crunch and Gov. Inslee requested the authority to release more money from the budget stabilization account, the Legislature would return before January.

But a September economic forecast projected that revenue collections for the 2019–21 state budget had increased by more than $2.2 billion, a striking shift from a June forecast which lowered the state’s revenue projection by more than $9 billion over the next three years.

Gov. Inslee and legislative Democrats had also been hoping for more federal dollars in a follow up relief package, which was hampered by congressional gridlock. This lack of adequate federal support leads Mullet to believe that some of his colleagues would have responded differently had limits on the governor’s proclamations been in place.

In the last round of closures, I think you would have had some things that wouldn’t have been closed down. I think there would have been members of the Legislature who would have felt that we wanted businesses to run as safely as possible and we would have been very comfortable putting on additional restrictions to make them do that. But I think there were a lot of members who weren’t comfortable with the concept of just shutting businesses down completely knowing we didn’t have the ability to provide the same kind of federal support we had in the spring,” said Mullet.

Earlier this month, Gov. Inslee extended the statewide restrictions imposed under Proclamation 20-25 to January 4, 2021. As the expiration date nears, Mullet says he is hoping for more clarity.

I’ve had five texts today about whether or not this thing’s going to end on January 4 from businesses who are freaking out. One example is the ice rink in Snoqualmie. They turn the ice off because they wanted to save money. They can’t just turn the ice back on January 4th, and they’re like, ‘we need to know if we’re going to restart our business, we have to know now, we need a week in advance notice.’ I’m a restaurant owner, we have to prep our produce, we have to order our product, we have to let our staff know their schedule. These are all things that I think the Legislature is hearing from the people we represent.”

Mullet says that he has been in contact with the governor’s staff and expects to receive more information regarding Proclamation 20-25 on Thursday.

Reached for comment on Wednesday night, a spokesperson for the Governor’s Office said that the staff is still working on ironing out the details surrounding the proclamation.

Regardless of what the Governor’s Office decides, Mullet says that receiving a clearer mandate for imposing restrictions on businesses should be the top priority for legislators heading into the 2021 session.

I think it should be priority number one, to determine whether there’s legislative support for shutdowns. If there’s not, they should end immediately. And the Legislature, obviously we can’t get in a session because we haven’t been called, but we’re going to be there on January 11th. And if the businesses are still closed on January 11th, I think that should be our first order of business is to determine what the Legislature feels on that issue and what people are willing to support.”