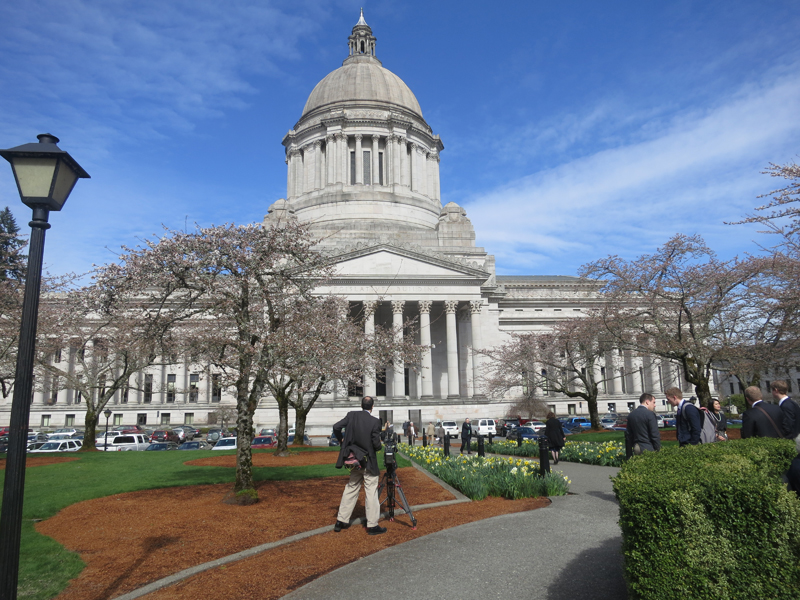 Washington’s projected Near General Fund revenue collections for the 2019–21 state budget and Near General Fund forecast for the next biennium (2021–23) are headed in a positive direction, according to a projection released today by the Washington State Economic and Revenue Forecast Council (ERFC).

Near General Fund revenue collections for the 2019–21 state budget have increased by more than $2.2 billion. ERFC now projects total Near General Fund revenues at nearly $50.4 billion for the current two-year state budget cycle, which began July 1, 2019. The spike in projected revenues would leave the state with a net $760 million surplus — including reserves — at the end of biennium.

The increase is a striking shift from June, when ERFC lowered the state’s revenue projection by more than $9 billion over the next three years. Today’s forecast cuts that June revenue loss projection in half.

Our revenue picture is vastly improved over what it was just a few months ago,” said Office of Financial Management Director David Schumacher. “But we will still face challenges in meeting the needs of our most vulnerable citizens, funding education and addressing other requirements over the next three years.”

Legislative leaders responded to the news with a mix of optimism and caution.

Washington’s diverse economy is showing signs of resilience. While we will still face many challenges ahead, there are some extremely positive signals for our state’s financial picture in this forecast and it represents an enormous step in shoring up our state’s projected budget deficit,” said Democratic Sen. Christine Rolfes, chair of the Ways & Means Committee. “Thanks to action by lawmakers to hold $3 billion in reserves and difficult decisions made earlier this year by the governor to veto legislation and reduce spending, we have a stronger foundation than most states upon which to rebuild.”

This might be the single best revenue forecast update in the state’s history. I can’t imagine we have ever had a forecast that said, ‘we now expect to collect $4 billion more than we did 3 months ago.’ But even with that, we are still in a $4 billion hole just for the next 2.5 years. That doesn’t include the subsequent 2 years that we’ll have to begin to balance over as well. Even if you raid the entire rainy day fund, we’re still in the hole by almost $1.5 billion for the upcoming biennium. That is not chump change and still suggests there are going to be some difficult budget choices ahead.”

Stokesbary also underscored the volatility of recent budget projections, and the roadmap he believes the situation has prescribed for legislators.

This whole situation is unprecedented, complicated, and interconnected. So while I would say it’s undeniably positive news that the state’s economic hole might not be as big as we thought, the fact that it’s still bouncing around so much shows just how cautious we need to be going forward.”

After the release of the projections, some Democrats moved swiftly to cast Republicans as irresponsible for calling for a special session as early as May, before waiting to see how economic conditions evolved.

If these Republican leaders had had their way, the legislature could have made billions of dollars in unnecessary cuts to the state budget. Since much of the Washington state budget is constitutionally protected, the areas available to be cut include essential services like mental health, support for child care providers hit hard by the pandemic, and higher education,” reads a press release issued by the State Democratic Party in response to ERFC’s projection.

To address the revenue shortfall brought about by declining tax collections, Republicans have called for a special legislative session in order to put a pause on new spending in the current budget, and potentially pass an early action budget that doesn’t have to be balanced.

If we are to protect the services that are critical to our state’s most vulnerable residents. We should be meeting in a special session right now, to reprioritize spending and put the budget on a better course for the nine months left in the biennium. The longer those decisions are put off, the more difficult they become. It’s long past time for anyone to be counting on help from the federal government,” said Sen. John Braun, a member of the forecast council and Republican leader on the Senate Ways and Means Committee.

Republicans argue that pausing new spending, as well as cutting funding for programs they view as inefficient and underperforming, will allow the state to avoid filling the budget deficit by making cuts to other programs down the line.

If a program hasn’t come online yet and we’ve made it all the way to 2020 without the program, it stands to reason we could maybe wait a few more months to not have this program,” said Stokesbary.

By waiting until January, Stokesbary believes the state risks sending out more money than it has coming in and worsening the deficit.

Democrats have been adamant about avoiding cuts they view as unnecessary, and potentially harmful.

Imagine if we had gone back to special session right away using the original data…cuts would’ve been devastating for working families and those most on the margins. The budget shortfall is still big but we can fix it without having austerity measures,” wrote Sen. Joe Nguyen on twitter.

Stokesbary said boiling down Republicans’ proposed approach as one of cuts alone does not accurately reflect the views of the caucuses.

I think comments like that, either intentionally or unintentionally, miss the point that my colleagues and I in the Republican caucuses have been making all along. I don’t know if anybody ever said that we ought to go back and cut $8 billion out of the budget and be done with our work for the next three years…had we gone back and found, say $1-2 billion of unnecessary spending, that’s exactly the same amount of things we’ll have to find whether the hole is $4 billion or $8 billion.”

Legislative Democrats have said waiting to see if the economy rebounds at all – or if Congress passes another COVID relief package with aid for state and local governments – could allow the Legislature to stave off painful cuts.

Additionally, some Democrats have been more amenable to the prospect of holding a special session after the November election, when their legislative majorities could expand. An increased majority, some Democrats believe, could signal public support for implementing progressive tax reform as a tool for addressing part of the remaining budget deficit.

I think we’re going to have a larger majority after the election, and that we’re going to have, essentially, a blessing from those voters to proceed with progressive tax reform and a balanced approach to the budget,” said Sen. Jamie Pedersen following the June ERFC forecast. “Voters are having these exact conversations about what they want the government to do and how they want it to respond to the crisis. I think we are going to get a strong signal from what the composition of the Legislature is.”

In a call today, Stokesbary restated that pinning the Legislature’s hopes on federal action is not his preferred approach.

Right now, the strategy seems to consist of a mix of hope and expectation that Trump will lose, Republicans will lose the US Senate, and the Democrats will bail out state and local governments. Maybe that will all happen and we won’t have to make any difficult choices as a state, but that doesn’t seem to be a very proactive way of solving the problem.”

Congress could reportedly leave Washington as soon as this week without passing another round economic relief, though Republican Senate Majority Leader Mitch McConnell is expected to call the upper chamber back to cast their votes for President Trump’s Supreme Court pick.

This article was cross-posted at our sister site, the State of Reform.