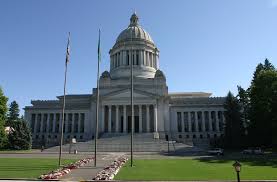 Voter turnout for the Aug. 3 primary election is shaping up to match other low turnout, odd-year elections over the last decade.

Of course, these numbers are likely overly rosey, since many people who are eligible to vote aren’t registered to do so. Factoring this in, the true participation rate is undoubtedly even lower.

Let’s look at the 2020 general election for an example. The Washington State Secretary of State recorded a voter turnout rate of 84.14%. It’s an impressive level of participation that in recent years is only eclipsed by the 2008 general election, which saw a turnout of 84.61% in the race that swept former President Barack Obama into the White House.

But factoring in the number of people who could vote, but haven’t registered (voting-eligible population), the United States Elections Project estimates that the true turnout rate for the 2020 general election was more like 75.7%.

Voters generally vote less during odd-numbered years anyway, as can be seen in the chart below which was created using Washington State Secretary of State data.

Washington state hasn’t always had odd-year elections. It started holding odd-year elections in 1973, ostensibly to limit the length of ballots. The AP noted that in 1972, there were 24 ballot measures on the general election ticket.

But low turnout is a problem that lawmakers, strategists and think tanks have been mulling over in recent years. HB 2529, which sought to restrict odd-year elections, was introduced in the 2020 legislative session and stalled out in committee.

During this Aug. 3 primary, San Juan County has had the highest turnout so far, at nearly 49%, while Grant County is the lowest with about 17.5%. King County is in the middle of the pack with just under 30%, and 60,500 ballots left to be counted.