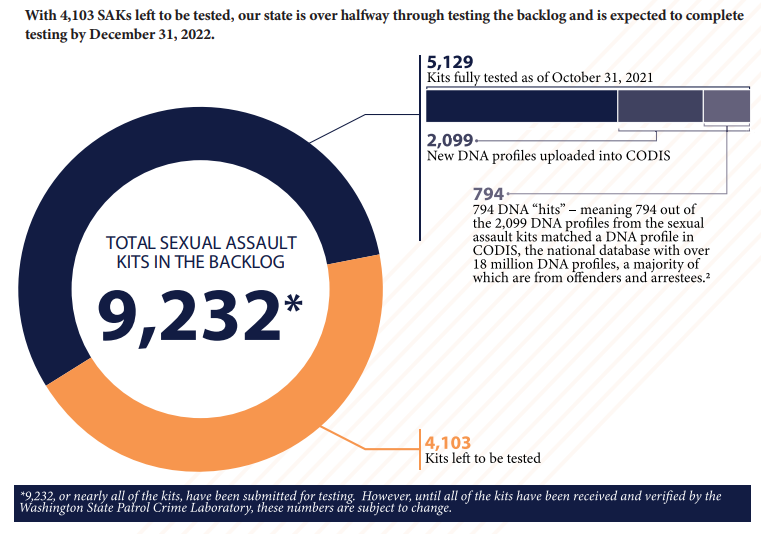 Washington State has processed more than half of its backlog of sexual assault kits, according to a new report.

As part of those reforms, the Washington Sexual Assault Forensic Examination Best Practices Advisory Group was also created, and tasked with monitoring the progress of testing the backlog of kits, as well as making recommendations to the legislature and governor on ways to improve the state’s response. Its latest annual report outlines work that has been completed this year, and makes recommendations for 2022.

During the 2021 session, the legislature acted on two recommendations from the advisory group by changing various sex offense statutes to remove a marital requirement. This prevented out-of-state offenders from avoiding registering as sex offenders after moving to Washington.

This year, the advisory group monitored the sexual assault kit supply chain and backlog testing progress. It found that of the 9,232 backlog kits, 5,129 have been tested since 2016. Nearly 2,100 new DNA profiles have been uploaded to the database, and there were 794 hits, meaning DNA from those kits matched a DNA profile in the database.

The Washington State Patrol estimates it will be finished testing all backlogged kits by the end of 2022, the report states.

The report also makes recommendations, including to provide funding for statewide sexual assault nurse examier (SANE) training, enhance collection of DNA by creating protocols for collecting DNA from qualifying offenders who won’t serve a term in jail, provide reimbursement for all sexual assault exams even when the assault happened outside the state, and increase trianing for prosecutors of sexual assault cases.