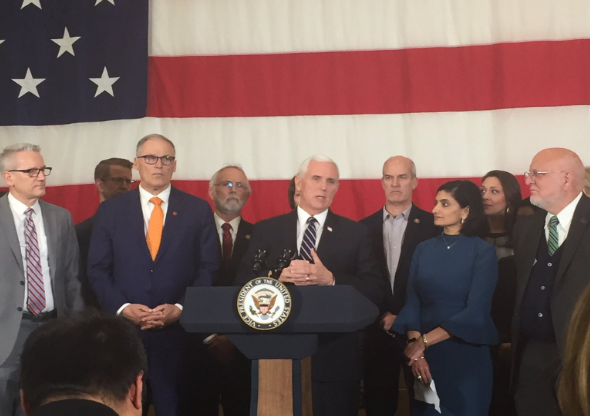 The Vice President arrived in Washington on Thursday afternoon around 3:15 and headed directly to Camp Murray for a private meeting with Governor Inslee along with the Center for Medicare and Medicaid Services (CMS) Director Seema Verma and the Center for Disease Control Director Dr. Robert Redfield.

The first meeting was followed by an emergency management roundtable discussion with the Washington Congressional Delegation and other local leaders.

After the roundtable discussion, Vice President Pence briefed members of the media on the state of COVID-19.

Speaking from a podium in front of a display of respiratory masks produced by 3M, a medical goods manufacturer, the Vice President spoke for roughly 10 minutes about the ongoing efforts on the state and federal level to stem the spread of the virus and ensure public health systems have the resources they need.

In his comments, the Vice President made a point of addressing fears regarding the severity and fatality rate of the virus.

While the coronavirus has spread in the Seattle area and new cases are detected around the country everyday, the good news is the vast majority of all of those who have contracted the coronavirus are recovering and doing well. The truth is, the risk of contracting the coronavirus to the average American remains low.”

While acknowledging that more cases will be detected in the coming weeks as testing is expanded, the Vice President relayed the prediction by health experts that most of the cases would be mild with flu-like symptoms.

The most significant point of caution raised by the Vice President regarded the outsize risk faced by elderly people and others with underlying health conditions.

Seven of the eleven deaths in Washington state have occurred at the Life Care Center, a long-term care facility in Kirkland.

According to the Vice President, the CDC is prioritizing the delivery of test kits to Washington state and California.

Commercial test labs in America are reportedly working to make it possible for local providers and pharmacies to access COVID-19 tests. The intended timeline for developing a vaccine is approximately one year and a half.

Flanked by members of the Washington congressional delegation, Pence also conveyed his support for legislation passed in Congress to provide nearly $8 billion in federal aid to support mitigation efforts. When asked later in the evening how much of the aid would be set aside for Washington state, Gov. Inslee interjected to say that he was confident the aid would be distributed fairly.

The Vice President promised that there would be considerable investment in state agencies dealing with the outbreak along with local health care providers.

The Vice President did not hold back praise for Gov. Inslee and Washington state public health officials for helping to form a “seamless partnership” with the Trump Administration to address the outbreak. The praise was mutual as Gov. Inslee thanked the Vice President for helping to remove federal restrictions which prevented individuals from getting tested unless they were hospitalized.

The plaudits from Gov. Inslee came only days after he issued criticism of the Trump Administration on Twitter.

When asked about the change in tone, Gov. Inslee remarked that despite his myriad disagreements with the Trump Administration, they would not dissuade him from working with federal officials to effectively address the outbreak.

The comments by both the Vice President and the Governor set the stage for an evening with a strikingly bipartisan tone.