In an effort to mobilize the Native American vote in Washington, tribal leaders and members kicked off the first N8tive Vote 2018 Rez to Rez Tour this weekend.  The tour is currently criss-crossing the state to visit all 29 Native American tribal reservations in 10 days.

Historically the voter turnout rate of American Indian and Alaska Natives is has been low according to the National Congress of American Indians. It is often between 5 to 14 percentage points lower than the rate of many other racial and ethnic groups. In addition, nationally, 34 percent of Native Americans are not registered to vote, compared to 24 percent of the population as a whole who did not register to vote in 2016 according to the Washington Secretary of State.

Washington is one of the top ten states with the highest populations of voting-age Natives with 134,000 potential votes, or 3 percent of the population. In tight congressional races like, Washington’s 3rd CD, Washington’s 5th CD, or Washington’s 8th CD those votes could make a real difference. Quinault President Fawn Sharp encouraged Native voters explaining,

The Tour is sponsored by the First American Project, a PAC founded this summer by a coalition of Native American leaders and allies from communities of color to advocate for environmental and civil rights policies. In addition to getting out the vote, the Tour, will also be sharing information about initiatives 1631 (Carbon Emissions Fee Measure) and 940 (Deescalate Washington), both of which are supported by the PAC.

More details about the Tour can be found here, with event details for each location can be found on the N8tive Vote 2018 Facebook page. 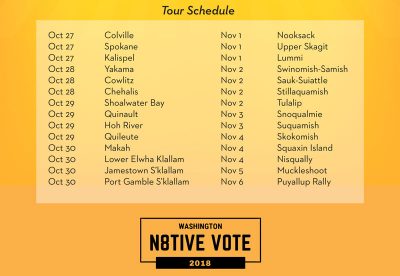