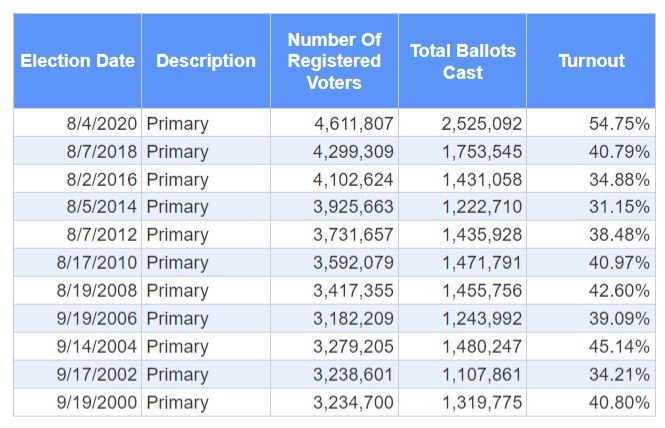 One of the nice things about elections is that you can test your assumptions with real world results from the ballot box.

Now that we are a week removed from the primary election, some of the dust has settled. Some of the passion and energy of the primary campaign has softened.

We can see with clear eyes what the returns tell us, and try to figure out what lessons we might draw from them.

And, when we look at the returns without bias, I think the lesson is clearly that Republicans over-performed the general expectations for 2020.

Let’s start with the expectations. This looks like a banner year for Democrats nationally.

President Trump is an anchor around the necks of a number of Republican candidates in swing districts and swing states. I expect 2020 to be a referendum on the president, as these re-elections are, and that the head winds facing Trump will take down congressional Republicans in a number of swing states and districts.

I may be wrong. It wouldn’t be the first time. But, the quantitative data is compelling on this point. In Washington State, Biden has a 26% lead over Trump, a spread that has held relatively steady for months.

Washington State historically has one of the highest rates of turnout in the nation, with presidential general election participation rates nearing 80%.

So goes the mainstream thinking at least.

Now that we’re a week after the primary, I can’t tell you if the year I thought Democrats were going to have is more or less likely to happen.

But, what I can tell you is that the momentum of 2020 didn’t materialize for Democrats in the primary.

Put differently, Democrats simply under-performed expectations of a blue wave in 2020 in this primary.

By any measure, this was a very good election for Republicans.

Now, sure some on the left will point to the expected increase in turn out this November and how that will help Democrats.

I think that’s true, at least my experience tells me so.

It would be a tough time to find that out in November if one were a Democrat. Waiting to see isn’t the smart move.

There are plenty of smart folks on both sides of the aisle when it comes to campaigning. But the Democratic playbook is essentially the same one it’s been for decades. Maybe it’s getting stale?

Moreover, one of the most important tools Democrats have to support down ballot races is the GOTV and mobilization effort of the Coordinated Campaign.

This effort is funded primarily by labor unions, and results in a comprehensive ground game to support top-of-the-ticket races, with coattails for down ballot candidates.

With no significant race to protect at the top of the ballot – no meaningful Gov, Lt. Gov, or US Senate race – there isn’t a sense of urgency (or significant funding, I’m told) to support a big Coordinated Campaign effort this year for Democrats.

In fact, this is the first presidential year general election without a significant Governor or US Senate race, or the concern of a presidential race actually in play, to mobilize Democratic voters since maybe ever!

In 1996, which was a possible corollary, there actually was some question initially about Dole taking Clinton in the state. So the Coordinated Campaign was active and well funded. Otherwise, I have to go back to the 1948 election and a year where Democrats and Communists were divided on Washington State’s left, and Truman had mixed support.

You get the point: there is an historic lack of mobilization at the top of the ticket among Democrats that would normally create infrastructure and support for down-ballot candidates.

Sure, a strong majority means more seats to defend. And yes, a loss of a seat does not threaten the ability to run a strong progressive message.

But, if the results from the primary hold into the general, it would be a huge under-performance, the likes of which we haven’t seen since, well, 2018.

That year, Democrats had a blowout performance in the primary, racking up leads in over 60 seats in the House. But, by the time the general came about, Democrats were giving back votes, landing on 57 total seats – the same percentage of statewide Democratic performance over the last decade.

In other words, the Blue Wave of 2018 got legislative Democrats majorities exactly even with average statewide Democratic performance.

It wasn’t all bad however. That year, 2018, turned out to be the first year that House Democrats added any seats since 2008. It had been a bad run for legislative Democrats.

So, maybe the current legislative maps are built towards maintaining narrow majorities for Democrats, and giving back a seat or two is just reversion to the mean. I don’t know.

But, what’s clear here is that these primary results don’t fit the common narrative of 2020 being a banner year for Democrats.

For folks who think that this is going to be a good year for Democrats because of the toxicity of the Republican brand, the results from the primary just don’t show that.