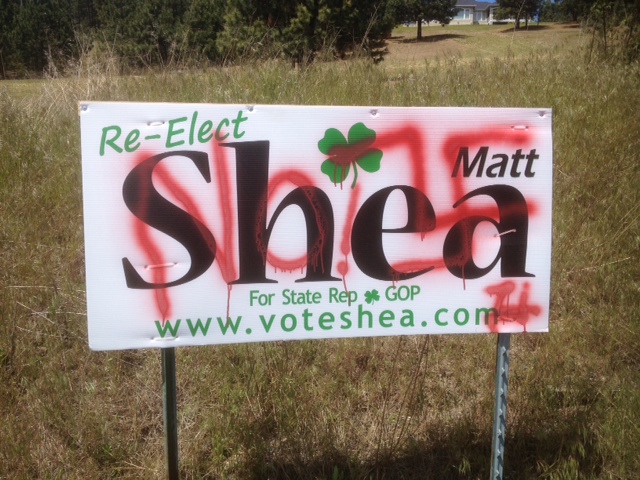 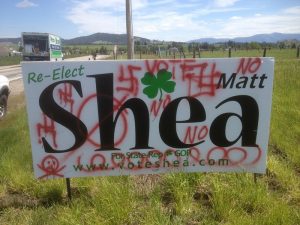 Someone seems to have it out for Matt Shea.

OLYMPIA, May 31.—Normally when you start seeing swastikas around town, you chalk it up to bored teen-agers celebrating their first beer. But Spokane Valley Republican Matt Shea sees a hate crime a-brewing in the spray-painted nastiness that started showing up on his campaign signs Tuesday night.

Whether it was a teen-age lark or a political statement by witless activists who have trouble telling the difference between Republicans and fascists, it shows that hate crimes are definitely in the eye of the beholder. In a statement issued to media, Shea says conservative opponents of gay marriage are the oppressed minority in Washington state. Not gays.

“As most of you already know, I am the state representative for the 4th Legislative District, an ardent supporter of Israel, and a committed Christian.  However, some of you may not be aware of the support my campaign has received within the Messianic Jewish community.

“Sometime between 10:30 p.m. May 29, 2012, Tuesday night, and 6:00 a.m. May 30, 2012, Wednesday morning four campaign signs were vandalized in the north Spokane Valley area.  The signs were spray painted with violent, threatening, hateful, sexually explicit, anti-Semitic, and anti-Christian words and symbols.  This is clearly an attempt to threaten, harass, and intimidate me and my family.

“The Spokane County Sheriff’s Office is investigating the incident and I have also notified members of the Messianic Jewish community. 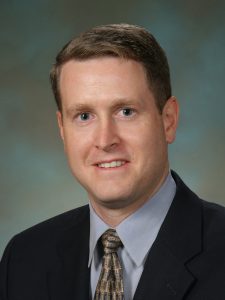 “This hate crime follows on the heels of my involvement in the R-74 campaign to stop the blatantly unconstitutional SB 6239 and my outspoken criticism of current Democrat leadership in Olympia and their continued inability to pass a truly sustainable balanced budget after wasting half the session on homosexual marriage.  It appears I was targeted by members of the violent and radical progressive movement for my conservative consistent stand for limited constitutional government and my religious beliefs.

“To the person or persons who sought to silence my voice through intolerance and intimidation, let me be perfectly clear: I am not moved.  I will not bow to what appears to be a threat on my life with the skull & cross bones, concertina wire, and cross-out symbol depicted on one sign.  And as a combat veteran of the Iraq war and so soon after Memorial Day, I think it is important to speak directly to those on the radical left who would seek to divide us and this country: YOU WILL NOT dishonor the memories of our fallen heroes with your hate or intimidate me into submission.  We can disagree on reigning in spending in state government and same-s*x marriage but the outright physical attack on those who disagree with you is un-American.

“Unfortunately this is not an isolated incident.

“Over the past few months many Conservative Christians and Messianic Jews throughout Washington, including sitting legislators and their family members have also been the targets of intimidation and harassment including assaults, threatening emails, midnight phone calls, and even the total destruction of a car.

“I condemn in the strongest possible terms this bigoted intolerance and the anti-Semitic and anti-Christian words and symbols used.  Jews and Christians were horrifically persecuted under the N*zi regime and heroes like Martin Niemoller and Dietrich Bonhoeffer would be horrified to see similar overtones emerging here in Spokane Valley.  Religious persecution in any form is hostile to the founding principles of America. 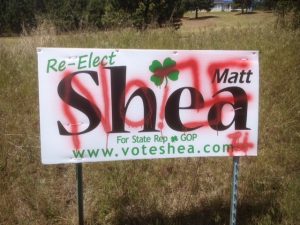 Same can of paint, apparently.

“As the elected representative of all residents of Spokane Valley, the 4th Legislative District, and those of all faiths, I call on community, civic, and political leaders of all persuasions, including my opponent and the Spokane County Democrat Party, to join me in publically and immediately condemning this hate crime and calling for those responsible to be held to account.