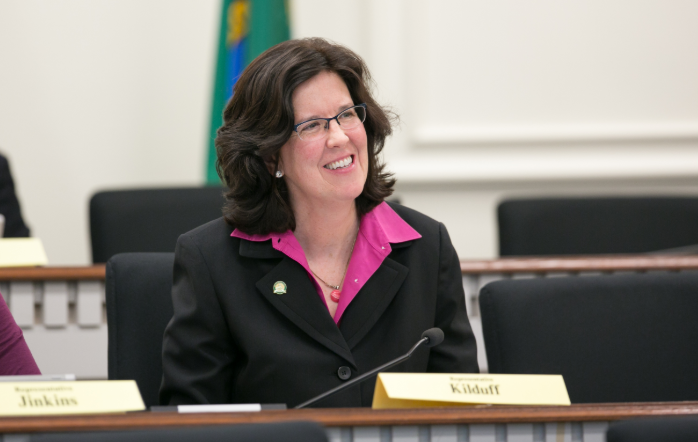 Rep. Christine Kilduff announces that she will not seek re-election in the 28th Legislative District

Representative Christine Kilduff, D-University Place, announced today that she will not seek re-election to her seat in the 28th Legislative District. She will complete her term and leave the position in January 2021.

First elected in 2014, she serves as the Chair of the House Civil Rights & Judiciary Committee. Prior to being elevated to Chair she served as the committee’s Vice Chair from 2015 to 2019. She also serves on the Appropriations and Human Services and Early Learning committees. Last legislative session, she served as Deputy Majority Floor Leader.

Representing the 28th District in the Legislature has been the highest professional honor. Our citizens are a very engaged group of citizens and serving as their voice in the Capitol is a privilege that I will long cherish,” said Kilduff.

A champion for public schools, military and working families, the LGBTQ community, children and individuals with developmental disabilities, Kilduff passed both large and small reforms that have made measurable impacts on people’s lives.

This year she passed bills to create a Bill of Rights for people with developmental disabilities and hold domestic abusers accountable by establishing procedures to ensure they actually surrender dangerous weapons as ordered by a court.

In 2016, she passed the ABLE (Achieving a Better Life Experience) Act which creates tax-deferred savings accounts for people with disabilities. This program permits those with developmental disabilities to save money without jeopardizing their eligibility for benefits which are often means tested. This year the program signed up its 1,000th enrollee.

The granddaughter of four Irish immigrants, Kilduff grew up in the Bronx and Long Island and attended Boston College for undergraduate and law school. Prior to coming to the Legislature, she served as an assistant attorney general and University Place School Board President.

I am immensely grateful to my family–my wife, Colleen, and our amazing daughters, Amelia and Julia–for their unending love and willingness to allow me to run and serve as state representative, which included many hours away from home,” said Kilduff. “I have been representing the public and the people of this state in one form or another for the last twenty-five years and look forward to continuing to serve in some other capacity.”

The 28th Legislative District encompasses University Place, Fircrest, Steilacoom, DuPont, Joint Base Lewis-McChord, Anderson Island and parts of Lakewood and Tacoma. Joint Base Lewis McChord is the largest military base on the West Coast and the fourth largest base in the country.

This press release was provided by the Washington House Democrats.