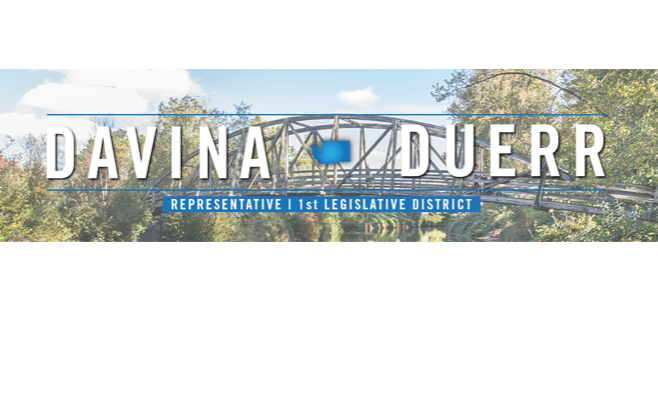 Representative Davina Duerr was appointed to the Washington State Legislature to represent the 1st LD at the beginning of July. She takes over the position from Sen. Derek Stanford who was appointed state senator following Guy Palumbo’s departure.

Duerr has served on the Bothell City Council for the last three and a half years. Though her appointment to the legislature took place just weeks ago, we caught up with Rep. Duerr to learn more about her background, issues she is passionate about, and what she is looking forward to in the 2020 legislative session.

Emily Boerger: To start off, can you tell me about your background and how your previous experiences have prepared you to serve in the legislature?

Davina Duerr: “Well, I am an architect by education and career… And I would say that definitely plays into my qualifications because architects are problem-solvers. Every design project is a puzzle to solve and I think that is very similar to the role of a legislator. You see problems and you try to fix them.

And then more specifically, I served on the Landmark Preservation Board in Bothell for 10 years. So, that gave me some experience as far as how the city government works, what that looks like, and just playing a part in serving the community.

I also co-founded a project called the M.I.L.K. Money Project for the Northshore School Foundation. And that was with a couple of friends to raise money to create a fund to help homeless students in the Northshore School District. Then I joined that board and I was vice president at the time that I decided to run for city council.

And then, obviously, my three and a half years on the city council is a big part of my qualifications because I’ve gotten involved regionally. I think, probably, my biggest regional experience has been with getting involved with transportation. I’ve served on the Eastside Transportation Partnership, the PSRC Transportation Policy Board, WSDOT’s Executive Advisory Group, and most recently, Sound Transit’s Elected Leadership Group. So, most of my committee work has been around transportation.”

EB: What are some of the big issues that you think need to be worked out in the state, or in Bothell, related to transportation?

DD: “Well, I think one of the biggest issues as we grow and become more dense — obviously this goes along with transportation — is access to transit. Bothell, with Sound Transit 3, is getting two bus rapid transit lines and so I’ve been involved in trying to plan what that I-405 line looks like and how the SR 522 and 405 BRTs come together and work together. And I think that’s huge because we are not getting a light rail line and so this is our chance. And it really needs to work for Bothell in order for people’s lives to function well and also for us not to continually build more roads. The solution is transit.”

EB: With all of this experience you have, what pushed you to want to serve in the legislature?

DD: “I think this particular session, the city council got really involved. And I was down [in Olympia] probably 5 or 6 times, testifying and lobbying for fixes on the 405 at Bothell between SR 522 and SR 527. And I really was just fascinated by the process of how it works and how you get things done. It really piqued my interest and got me really interested in what you can accomplish.”

EB: Outside of transportation, what are some of the other key issues that you are passionate about or that are priorities for you?

DD: “I would say, even above transportation for me, is the environment and climate change. I’ve had a keen interest in that topic since college actually. I did my college thesis with a sustainable co-housing project on a Native American reservation, actually in Upstate New York. One of our professors had told us the building industry was the largest polluter and resource-heavy industry. And I took a lot of time trying to figure out how would I mesh my environmental sensibilities with a career.”

So, that was kind of where my environmental passions started.”

EB: I know you’ve only recently been appointed to your position, but is there any specific legislation that you have in mind, or ideas that you want to explore?

DD: “One of the bills that I would like to see come back this [upcoming] session is the low carbon fuel standard. I’m really interested in that one. I’ve seen presentations from the Puget Sound Clean Air Agency several times and it’s very compelling. There are really great reasons why we need to push that forward.

EB: What are some of the top issues facing constituents in the 1st Legislative District?

DD: “I don’t think it’s that different from other districts in the sense of the big issues being transportation and commute times, and affordable housing. I think the 1st LD is struggling with opioid addiction and some of the homelessness that the rest of the region is dealing with. Those are the things that I’ve heard and that come to mind.

I mean, Bothell is in the 1st LD, so a lot of the issues that we’re dealing with in Bothell are similar to the entire 1st district.”

EB: Are you going to be involved in any legislative work during the interim? What does that look like?

DD: “Well, I’ve only been on the job 14 days. So, right now I’m trying to hire a legislative aide, I haven’t yet hired one. That will help get me moving in the right direction more quickly. On the 31st there’s a vote for the Speaker, so that’s a pretty big deal.

And then I’m, kind of, rolling around ideas in my head on bills that I might be interested in… I’m really interested in stem cells – in stem cell therapy. And so, that’s something that I’m pretty passionate about because I have had some stem cell therapies that were really successful and I feel like, with conversations with my doctor, I’ve heard that it’s a wide range of abilities and not necessarily as regulated as it maybe should be. I know that there are some doctors who just take stem cell classes over a weekend and then they’re certified. I just think that’s crazy. And that might be why there are issues with getting stem cell therapies covered by insurance. I’m pretty naïve about all the issues, but I’m doing some research on that right now because I think that it could be a really powerful tool in the toolbelt to avoid really big surgeries that cost insurance companies a lot of money.”

EB: An article in the Stranger mentioned you potentially balancing work in the Bothell City Council, the legislature, and your job as an architect. Is that something you’re considering – balancing all three?

DD: “Yeah, I mean, they’re all three part-time jobs. Obviously, the [seat] vacancy didn’t happen until after the city council filing week. So, I obviously feel a loyalty to the residents of Bothell. I think I’ve done a really good job for them and there are some things that I’d like to see finished out. And this is an appointment; I still have to run for an election.

So, it’s not going to be easy, I know that. But I do have a very supportive family and I have, as I said, my architecture job is part-time. I can’t imagine if it were full-time; there’s no way. But I can manage it for now, and we’ll have to see what happens in terms of the load. I mean, this is the short session so that will be a good test to see how that all works.”

EB: What are you looking forward to most, in serving in the legislature?

DD: “Well, I think it’s interesting because from a city standpoint, I’ve learned a lot about how cities work and the impact that the state has on cities. So, I think it’s really exciting and interesting to think about bringing my perspective from city government to problems that I know the state could help solve.

And I think that’s kind of a unique perspective. I don’t really know how many city councilmembers go on to the legislature, but I think that it’s a really important perspective to bring to the state level because there are so many impacts of the decisions that they make on cities. So, it will be interesting to see.

You know, no matter what level of government, you hear people’s problems and you empathize with them. From the cities’ perspective, you can’t always solve those problems and now, going to the legislature, maybe some of those real issues that people are dealing with, I can help solve at that level. And that’s exciting to me.”

This Q&A has been edited for clarity and length.