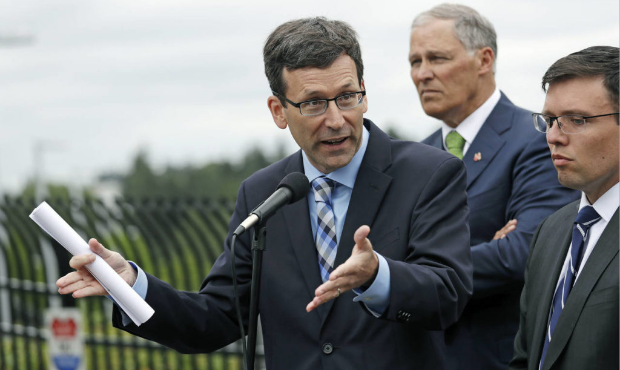 Attorney General Bob Ferugson is making a concerted effort this session to enshrine what he and Governor Inslee have called a “Domestic Workers Bill of Rights,” into state law. The effort comes via a pair of bills making their way through both chambers: SB 6247 and HB 2511.

The bills aim to safeguard against exploitative dynamics that exist in domestic service employment relationships, such as retaliation for reporting harassment and threats regarding workers’ immigration status.

While the House version is scheduled for executive session in Appropriations this morning, it looks different from the original text. Amendments to the bill remove certain economic provisions, such as protections mandating an hourly minimum wage.

I spoke with Attorney General Ferguson yesterday to discuss what factors drove his team to focus on these bills; his take on the legislative process; his diagnosis of why gaps in labor law have long persisted; and how he hopes to build on this effort in years to come.

Michael Goldberg: I want to begin by zooming out to ask for your thoughts on a point that some labor historians have made that, if you look at the history of labor struggle in the United States, almost every significant gain was made during periods when a moderately sympathetic administration was in the White House. Without an administration that is supportive, or at the very least, not actively engaged in efforts to undermine organized labor, achieving reforms from the bottom up becomes very challenging. So, given that this bill is being introduced at a time when labor interests are not a foremost concern at the federal level, do you think this pair of bills would look different if they were being introduced during an administration that was more amenable to labor?

Attorney General Bob Ferguson: From my perspective, that is not the primary way which I’m viewing this. There can be a focus on the big shiny object in DC, which can have a downside in that we don’t focus on our own state. The Domestic Workers Bill of Rights is a good example. Why do we have a lack of laws that protect domestic workers? That makes no sense to me. To the premise of the question, even though I do think the administration is not doing a lot to help workers, that’s not why I’m doing this. I see a problem here in Washington State. I see an absence of protections in our state laws. That’s what is driving my interest, and frankly it always has.”

MG: I’m interested in hearing more about that absence you mention, or put another way, the gaps that need to be filled in our state laws. Can you walk me through how labor law has evolved in Washington State as we find ourselves in 2020 without these worker protections already in place? One would think in a state like this, policymaking has lagged behind public sentiment on this issue.

BF: That’s a good question and I can tell you what I think is going on. It’s not an empirical answer but I’m confident that part of the reason is that the individuals impacted by these laws, or lack of laws, are not folks who tend to have high-priced lobbyists walking around the halls of the state capitol advocating for their interests. Domestic workers, I’m not familiar with too many high-priced lobbyists walking around Olympia advocating for their interests. We had laws on our books until a few years ago where even if you as a company had been found to be in violation of our wage theft laws, which means that you did not pay your workers what they were entitled to, the state would still contract with those companies. Why would we reward a company that has been found to have wilfully violated our wage theft laws? That’s dumb. Why was that allowed? My guess is it has something to do with those high-priced lobbyists walking around the halls of Olympia, pouring through the books on those kinds of laws and policies.

I view my role on these issues as trying to be an advocate for workers. I’m trying to move more of our focus in the office in the direction of advocating for workers in the courtroom if necessary or from a policy perspective with the state legislature.”

MG: The bill is geared toward closing gaps in existing labor law, although, it seems the updated version of the bill will no longer address the economic portions of those gaps. The central aim of the bill now really centers around freedom from harassment, protection from retaliation, and the eradication of exploitative dynamics that exist in domestic service employment relationships. Almost everyone would agree that these reforms are long overdue. But it in my mind, I can imagine that when some people hear that the central economic portions of the bill have been taken out, it might signal that the primary structure through which employers derive their power has been left in tact, that most of what employers need to do as a result of this bill is not engage in overtly predatory behavior. But it seems that economically predatory behavior may continue to linger in legal gray areas. So what is the plan to address those issues going forward?

BF: Going forward we will attack those economic issues. The current version of the bill has in place a workgroup to specifically convene and analyze those economic impacts. My goal will be to have that group analyze those issues, make sure that we’re analyzing those impacts fully and mitigate any potential issues, such as with au pairs for example, who we heard from throughout the process. My goal will be to come back next year with a thoughtful approach to the economic side of the bill.”

(The bill originally contained provisions designed to extend more economic protections, such as an hourly minimum wage, to domestic workers who are not entitled to them under current labor law. Under it’s definition of a “domestic worker,” the bill’s updated language does not include persons who provide care for family members or persons who provide babysitting on a casual basis.)

You know how it works in Olympia. We went in there asking for a whole lot and certain legislators expressed some concerns and said ‘hey why don’t we dial it back a little bit session.’ There is more work to do.”

MG: I think this brings us to a question that a lot of people wonder about, which is: what gets taken out first and why? You go to Olympia and ask for a whole lot, as you said, and you compromise on certain issues before others. Why is it challenging for a bill like this to make it through the legislative process with the economic provisions it had in the original text?

BF: Passing the most benign bill through the legislature is a challenge; even a resolution honoring someone, anything; just to get a bill though the house, through the senate, signed by the governor is a challenge. So, it’s not a shock to me that we came with this bill, which is a pretty fundamental overhaul of worker protections for domestic workers, and a piece that I care about needed to be taken out so that we could pass the other piece. That’s just often how the world works down here. What I’m glad to see is the workgroup still embedded in the bill, which telegraphs to legislators and to domestic workers that we’re not done on the economic issues. But legislators have a right to say, “Hey Bob, why don’t you study this a little more and bring it back next year.” That’s a reasonable request. If we can get the protections in place that are still embedded in the bill now and then come back next year on the economic side, I can live with that even though it’s not my first choice.”

MG: We heard a lot of gripping stories at the public hearing, and there is more broad public sentiment behind labor reform at this moment, but I’m wondering if you could expand on the observations you made, whether qualitative or quantitative that led you to put forward this legislation?

BF: We’ve been working on bills to support workers for a number of years now. I ask my team before each legislative session to take a look at existing laws and see what needs to change to improve the lives of workers in Washington State. That’s an annual exercise that my team does. So, in the past we’ve put together bills to address why the state was contracting with companies that violate our wage theft laws. We had a bill around strengthening prevailing wage laws, and we got that passed. Each year we’re looking at these things and sometimes we’re litigating. We had a whole series of litigation surrounding no-poach clauses.

We’ve heard from folks across the state who advocate for workers, and when my team laid out some options for this session on a bill for workers, this one made the most sense to me; the combination of how outrageous it was that these protections were not in place and the feasibility of the bill to pass.”

MG: There seems to be a sense in Washington State that so many people are moving here to get high paying jobs in tech, or whatever else, but there remains a segment of the population that is struggling, and that segment often goes unseen. I’m curious, as a lifelong Washingtonian, to what extent you’ve noticed the dynamic between workers and people at the very top shift?

I agree with the premise of the question that there is an entire segment of the workforce in our state that is, to use your term, unseen by policymakers. I don’t want to cast too broad a brush, of course there are legislators who care about all workers and think about that. But speaking generally, is there a large segment of our workforce who is unseen? Yes. And unseen not just by policymakers but by the local media, you being the exception (laughs). I’m not quite sure what to add that isn’t a cliche but I view it as part of my job to ‘see all those workers,’ and make sure we’re advocating for them with better policies and through our litigation. That has been a concerted effort; that’s an initiative in the office; that’s something we talk about a lot. I want my team bringing me ideas for policy changes or for possible litigation to change unlawful activities by companies and corporations that aren’t playing by the rules and adversely impacting workers.

I remember being in Eastern Washington and I was up early at the hotel getting breakfast before work, getting my cheerios and my toast, and I was the first one in. There was a woman there working and I bet she was in her 70s. I just got talking to her and I remember saying something like, ‘Oh you’re getting an early start this morning,’ and she laughed because she had just come straight from her night shift at another job. I think about her and folks like her who are working very hard, and their voices should be heard at our state capitol. A lot of people are trying to make those voices heard, but I think I can occupy a unique role in my current position to advocate for folks like her.”