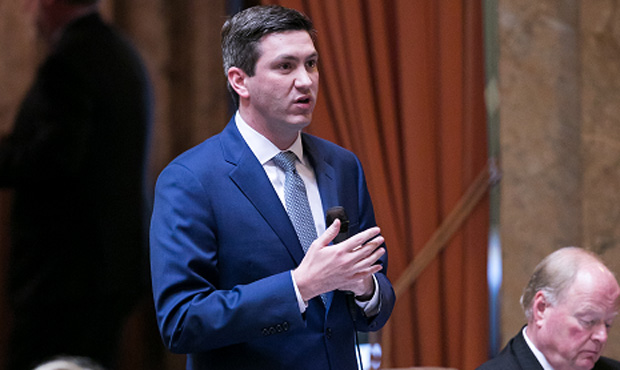 Q&A Part 2: Rep. Drew Stokesbary talks about the importance of applying pressure to bring about change

Rep. Stokesbary and I continue our conversation by talking about the pressure applied to the NCAA by state legislatures, the pace of legislative change more broadly, and how Rep. Stokesbary plans to move this issue forward next session.

You can read the first part of our conversation here.

Michael Goldberg: You’ve made clear your belief that state legislatures have been central to pressuring the NCAA into changing its stance on profit restrictions for student-athletes. Can you speak about how it feels to have produced legislation that may have been a tipping point in this debate?

Rep. Drew Stokesbary: It feels good, for lack of a better term. It is rare that big things happen quickly in Republican forms of government. Whether it’s the US Congress or state legislatures, they are designed to protect the status quo. That can be a good thing or a bad thing depending on how you feel about the status quo. You need a majority of two different groups of people to agree with you plus the Governor or the Executive, and not just to agree with you, but to agree to your specific articulation of an idea.

Here in Washington, we’ve got 98 representatives, 49 senators, and the governor, and you’ve got to get 74 or 75 people to agree with you, including two committee chairs, a speaker of the house, a senate majority leader, and the governor.  A lot of really smart and powerful people not only have to agree with you in general but agree with your very specific formulation of a solution. This makes it hard to do big things quickly. Usually when we do big things it’s been a multiyear process. The idea that in less than 12 months, you could go from the NCAA saying “over our dead body will we ever compromise on this issue” to them going out on their own and announcing they are going to compromise on this very issue, it’s astounding and virtually unheard of.

Sports is one of those weird things where, it’s a huge deal for the people actually involved who are risking their bodies and their long term health every day, but for most of us who really only engage with college sports on Saturdays in the fall and in March, sports don’t really matter. It’s a fun thing that can be a cultural and familial issue to gather round. Sports don’t really affect people’s daily lives yet there are also few areas that influence people’s daily lives as much as sports. Something like this is really monumental: that we could have such a fundamental change in something that virtually all Americans have thought of and know about and engage with from time to time. And I absolutely think the change was brought about because of the pressure by state legislatures. The only thing that has changed in the last year is proposals in the state legislatures and media attention on those efforts forcing more people to confront the question of whether or not the NCAA’s existing model is really fair for the students.

Huge amount of credit goes to California. They passed the bill in under a year, and they did it unanimously. It’s one thing to exercise raw political power if you have a majority and steamroll the minority and be done with it. They got every single Republican on board as well. But I also think, based on my conversations with California legislators, I don’t think this was something they were going to push this year until they saw us try in Washington. That is an achievement that I’m pretty proud of.

MG: The workgroup tasked with recommending changes to bylaws and policies has until 2021 to reach a decision on this matter. From a material standpoint, how did the Board of Governor’s decision on Tuesday actually change the trajectory of your efforts and what we can we expect this session in regard to HB1084 or any other related legislation?

DS: At this point, I’m still going to try to push the bill and offer some amendments that make it look a little bit more like California’s. I haven’t yet had the opportunity to have conversations with my colleagues to know if the NCAA announcement will make it easier or harder to move the bill forward. From my perspective, it’s necessary because I think the NCAA’s announcement only came because they were feeling the pressure from the states. If the states suddenly stop all that pressure, with time, the NCAA begins to rethink their decision and puts forth a rules change that amounts to a bare minimum. Maybe something like, only 2 athletes per team get to make a deal like this, or maybe an athlete can do it but the school gets to have veto power over it, or maybe we’ll have a cap at $100,000 per year. There are a number of ways in which the NCAA could make a token effort at change.

I would hate for the NCAA to make as small and narrow a change as possible because they felt like people had moved on from the issue and there was no pressure anymore.