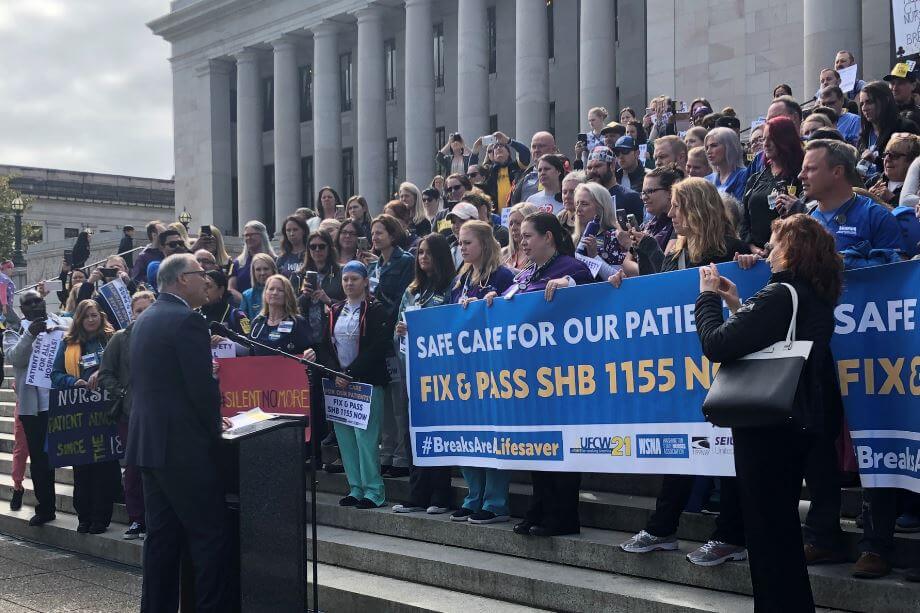 A central narrative in Olympia this week is focused on HB 1155, a bill related to rest breaks and mandatory-overtime protections for some Washington health care employees.

Last week, the Senate passed a version of the bill that included controversial amendments, with which the House refused to concur. On Wednesday, after a conference committee met and produced a report, both chambers approved a final version of the bill, which is now headed to the governor’s desk.


Wednesday morning, representatives from three unions — SEIU Healthcare 1199NW, UFCW 21, and the Washington State Nurses Association — rallied on the steps of the Capitol building in support of the bill.

Washington Gov. Jay Inslee was among those who spoke at the rally.

The bill that passed later that day requires health care facilities to provide certain employees with uninterrupted meal and rest breaks, except in some cases of unforeseen circumstances — for instance, if a national or state emergency is called, or if an employer decides a break might lead to a “significant adverse effect on the patient’s condition” without that particular employee’s knowledge, skill, or ability.

And, the bill adds a clarification that mandatory, pre-scheduled on-call time can’t be used to address foreseeable staffing shortages.

An amendment from Sen. Maureen Walsh that would’ve limited shifts to eight hours per 24-hour period is no longer in the bill.

Walsh has been part of another storyline throughout this bill’s journey that’s still playing out, after she spoke in favor of a Senate amendment excluding critical access hospitals from the break- and overtime-related requirements in the bill.

While speaking for that amendment, Walsh posited that nurses at critical access hospitals “probably play cards for a considerable amount of the day.”

The senator has since apologized. Her office issued a press release Wednesday, saying she’d received 10,000 emails and over 35,000 phone calls since the previous Friday — in addition to roughly 1,700 decks of playing cards.

“I like poker as much as anyone, but I think I’m pretty well stocked up right now,” Walsh said in the press release. “One thing’s for sure. It’s a good time to be in the playing-card business.”

According to the press release, Walsh plans to give the cards to nursing homes and veterans’ and senior centers.

The concern behind Walsh’s comments was that the bill would lead to increased staffing costs.

“I wish I could take my words back, but the issue remains important,” Walsh said in the press release. “Our critical access hospitals serve an important role in smaller communities across the state. Many already are operating in the red, and this could put them under.”

A video from WSHA earlier this session features some of those arguments.

“We want nurses to get breaks too,” Susan Stacey, Chief Nursing Officer at Providence Sacred Heart in Spokane, said in the video posted two months ago. “But, the way the bill is structured concerns me, because it would push hospitals to mandating when a nurse takes a break and scheduling those breaks, and I believe that could get in the way of patient care.”

“I think that, in management, their focus is all on budgets, making sure that the doors stay open to the facility,” McMahan said. “But, when they do things like re-brand the hospital, that’s something, to me, that doesn’t involve patient care. That’s a business thing. And, I think patient care has to come before that…If we all start working together, instead of against one another, we can come up with the right resolutions — if we set the priorities straight. It’s gotta be about the patients first.”

McMahan also said that there are staffing issues at Morton Hospital — just like there were issues when he worked at OHSU Hospital.

“There have been times, when I was at OHSU, when I didn’t get breaks and so forth because our patients were really sick, but it’s an ongoing thing where I’m at now,” McMahan said. “Because the staffing is such an issue, and when you’ve got that many patients…I’m not going to stop taking care of them. So, that means I don’t get my breaks. I don’t get my lunches. But, they’re my community, and I’ve got to give them the best care that I can — even if I have to sacrifice.”

The bill, in its final form, delays including critical access hospitals, hospitals with fewer than 25 acute care beds, and certain sole community hospitals until July 1, 2021 — McMahan said he’s not sure that phase-in is widely understood.

“I don’t think everybody knows that the bill, as it is right now, would have a two-year delay for the critical access hospitals,” McMahan said. “But you take what you can get, and it’s something that we can look forward to.”

This story was cross-posted on our sister site, State of Reform.