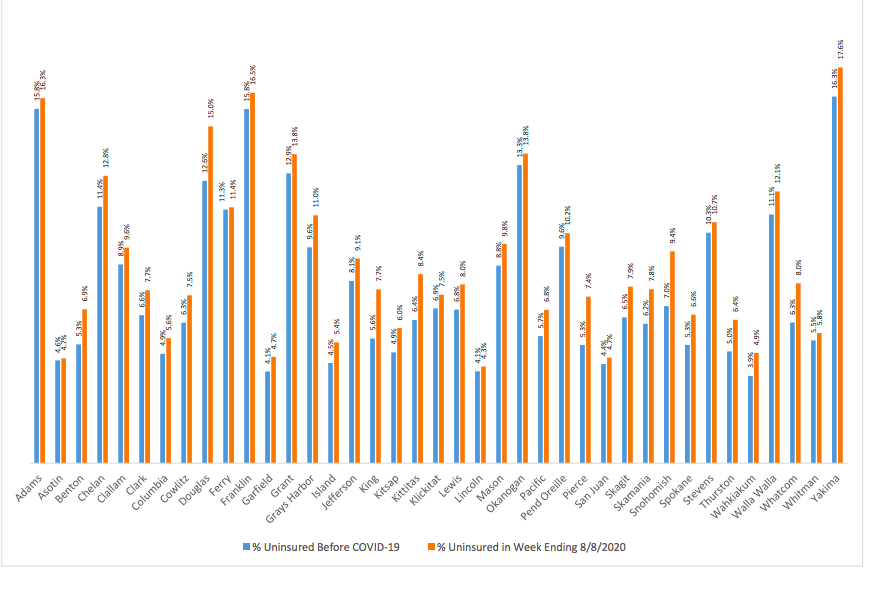 In its latest report on the impact of COVID-19 on Washington State’s Health Coverage, the Office of Financial Management (OFM) assessed the state’s uninsured rate, health coverage changes of newly unemployed workers, and changes in uninsured rates at the county level.

In the second half of March through May 23, 2020, unemployment claims surged in Washington and the state’s uninsured rate increased to 13% – the peak level during the pandemic.

Amid the first ten weeks of pandemic induced closures, starting on March 15, more than one million workers in Washington filed unemployment insurance claims. As a result, many workers and their family members lost their employment-based health insurance

Looking at the health coverage of newly unemployed workers, a disproportionate impact is clear, according to OFM’s analysis. The uninsured rate for the newly unemployed is estimated to have catapulted from 10.5% prior to the pandemic in 2020 to 48.1% in the week ending on August 8.

During this same timeframe, the employment-based health insurance coverage rate of these workers plummeted to 12.3%, down from 61.1%.  Their rate of coverage by two or more sources dropped by more than half from 9.3% to 3.6%. OFM did find, however, that some of coverage rates from other sources increased.

In this data set, OFM found that the greatest shift during the pandemic occurred within counties, rather than between them.

While uninsured rates dropped in every county since May 23, the rate in three counties – King, Snohomish, and Pierce – remains significantly higher than rates before the pandemic.

To conduct this analysis, OFM  simulated the changes in employment as of the week ending on August 8, 2020, using the 2018 American Community Survey.