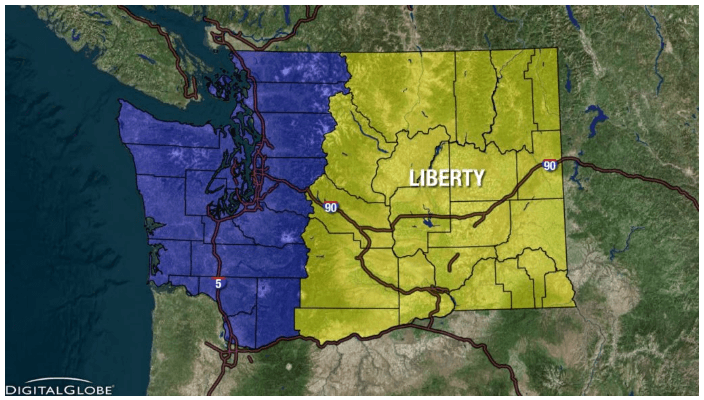 Rep. Matt Shea, who recently received national attention for a written manifesto he authored on the “Biblical Basis for War,” is also well-known for his desire to create “Liberty State”, the nation’s 51st state encompassing all Washington counties to the east of the Cascade Mountains.

Rep. Shea brought forth the House Joint Memorial petitioning for the creation of Liberty State during the 2015 legislative session, then again in 2017. The petition argues that the cultures, lifestyles, and economies of Eastern and Western Washington are so drastically different that Washington State should be divided in two. The memorial asks Congress to consent to the formation of Liberty.

According to Liberty State’s website, the goals of the new state are to limit government, lower tax obligations, reduce regulation, and bring about greater freedom.

A Public Service Announcement posted on the website on October 29 states that the initiative to create Liberty State already has support in 16 of 20 Eastern Washington counties at the “grassroots level” and that the initiative will enter “Stage II” in January 2019. The speaker on the PSA, “Lady Liberty,” also says the Liberty State Constitution is 95 percent complete.

We reached out to the Liberty State campaign for further details on Stage II and the kind of county support they are receiving, but have not yet heard back.

Rep. Shea recently won his re-election bid for Representative of Washington’s 4th legislative district. As it stands now, he leads the race by 16 points.