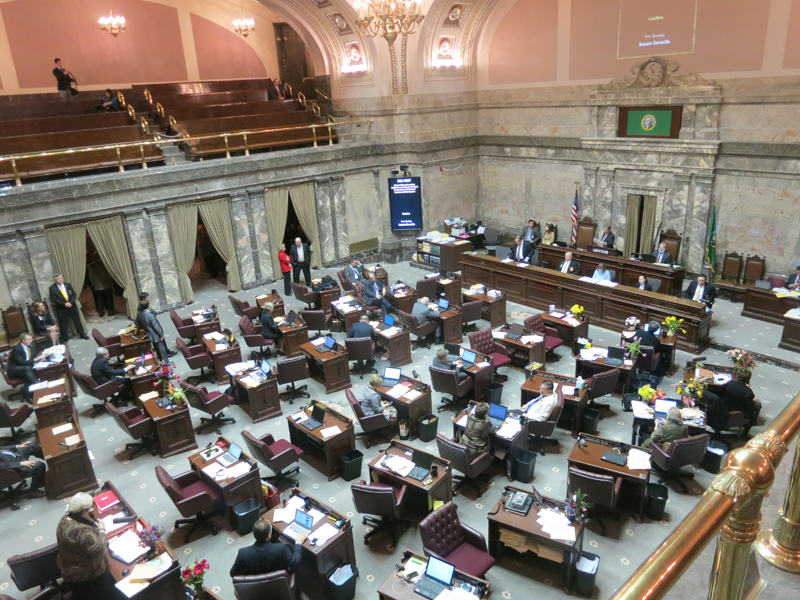 A Look at the 2015 Legislature: Fresh Faces, Old Battle Lines

In the view of Senate Republican Leader Mark Schoesler, Washington voters sent a simple message in last week’s election as they gave his party full control of the upper chamber — stay the course.

They also picked up four seats in the House and appear to have narrowly lost a fifth pick up, with Democrat Christine Kilduff likely edging Republican Paul Wagemann in the 28th District. Kilduff held a 289 vote edge over Wagemann Tuesday with only a handful of ballots left to count.

That leaves Democrats with a 50-47 edge in the House, and while one seat is vacant due to the death of Rep. Roger Freeman, D-Federal Way, they will be able to appoint a replacement to get a 51-47 advantage. Still, that’s the slimmest margin in 10 years.

So, what do these numbers mean? Two years of legislative gridlock in Olympia? Newfound importance for moderate Democrats in the House, who could become swing votes on key issues? Special sessions in 2015 that will run through June, just as the Legislature did last year? It all depends on whom you ask.

As each party grapples for the upper hand in the looming policy debates on transportation, education, and the environment, claiming your positions have the support of voters is an easy way to stake a lead. Republicans say their gains in both houses last week make for a winning argument, and Schoesler echoed as much this week.

“I think it’s clear that what the Majority Coalition Caucus and the House Republicans were doing met the public’s approval,” Schoesler said. “We were given a stamp of approval.”

Gov. Jay Inslee provided a summation of Democrats’ counter-points during a news conference last week. He noted the nationwide success Republicans had in Congress and in state Legislatures, as well as the low turnout of 51 percent of registered voters in Washington state casting ballots. That’s a marked dropoff from the 81 percent turnout in 2012, when he was elected and Democrats had majorities in both the House and the Senate.

HOPE FOR A TRANSPORTATION PACKAGE?

The Majority Coalition Caucus this year pitched a series of reforms it wants on transportation funding that also included streamlining environmental permits, reforming oversight and contracting within the state ferry system, and confining use of toll revenue to the area where the toll was taken.

The ideas were floated during a push for a gas tax accord and package in the waning weeks of the session, but met Democratic opposition on the revenue shift, which they felt siphoned existing sales tax dollars away from social service and education programs.

“The public still has interest in it,” Schoesler said. “They don’t want to see business as usual at (the Department of Transportation). We’re not going to skirt the issue that the taxpayers are going to need better value.”

Last month, the Washington Roundtable unveiled a study saying $7 billion transportation spending, lower than the $10 billion to $12 billion debated the last two years, would generate six times that in economic benefit and create 184,000 jobs, but the Roundtable pointedly stopped short of embracing any reforms, focusing instead on the most politically palatable projects.

That could leave Republicans vulnerable to Democratic charges that their insistence for reforms will undermine chances for a broad deal on a transportation package, and separate them from what business, a core Republican supporter, wants done.

Schoesler said they’re worth fighting for. “If these reforms were easy, they would have been done a long time ago,” he said.

A similar fight is brewing on education funding. The Legislature will have to find $1 billion to $2 billion in new funding for basic education in the 2015-2017 biennium to satisfy the state Supreme Court’s McCleary decision, according to the Office of Financial Management. An estimated $1 billion more in additional funding will be needed in the subsequent biennium. They raised $1 billion last year.

Initiative 1351, which aims to reduce instructor-to-student ratios, could tack on as much as $5 billion in extra costs over the next five years if it survives, and trends in late returns support its passage. The measure goes beyond McCleary’s requirement to reduce class sizes for kindergarten through third-grade classes, and reduce average class size in schools with different income levels for all grades. It would lead to the hiring of potentially 20,000 new staff members and teachers for public schools — only 29 percent of them teachers — but lacks a funding source.

On education funding, too, Republicans want reform measures in exchange for new revenue, such as teacher evaluations, which died last session, among others.

“We said reform before revenue,” Schoesler said. “This has to be a five-corner discussion about how to deal with it. Clearly we don’t have the money sitting around to do it.”

Senate Democratic Leader Sharon Nelson said her caucus will be laser-focused on basic education funding, but pledged to weigh all options presented as a way to supply new money.

“If we start saying, we absolutely will not do this, and close the door, that will not work,” Nelson said.

Still, Nelson said she wouldn’t stand for seeing state spending on social programs designed to protect low-income children or vulnerable adults sacrificed. She said each side will have to weigh program cuts with new revenue sources, in addition to supporting or opposing any reforms.

Gov. Inslee is also pushing hard for policies to cut Washington’s carbon emissions, and his approach could see stiff pushback from business groups and Republicans. What he decides to support remains to be seen — he’s awaiting recommendations from a taskforce that are due out Nov. 17 — but it figures to be another battleground in a multi-front legislative fight between Republicans and Democrats in 2015.

It’s a large class of freshmen Republicans in the House, but six of those seats reflect turnover in safe Republican or Republican-leaning districts. Democrats added Strom Peterson in the Mukilteo and Shoreline-oriented 21st District, Joan McBride in the Eastside-based 48th District and likely Kilduff in the 28th. A new lawmaker will be appointed to fill Freeman’s seat in the 30th.

The GOP brings in two legislators under the age of 30 in Melanie Stambaugh, the 24-year-old who knocked off six-term incumbent Dawn Morrell in the 25th District, and 29-year-old Drew Stokesbary, who took a 31st District seat vacated by former Rep. Cathy Dahlquist when she ran, unsuccessfully, against Sen. Pam Roach.

Stokesbary said in an interview he didn’t have any trepidation about entering the Legislature at such a politically polarized, contentious moment. He said he pledges to stick to a principle of not raising taxes, but sees opportunities to work across the aisle on other issues.

“I’m a Republican,” Stokesbary said. “I would be extremely reluctant to raise taxes. I’ll be the first to admit we don’t have the answer on all the questions 100 percent of the time. If that’s ‘bucking the party,’ then so be it.”

With the closer margins in the House after the election, Stokesbary said he sees opportunities to gain influence by not being locked in ideologically on every issue.

Republicans are adding Judy Warnick in the Moses Lake-centric 13th District, who replaces Janea Holmquist Newbry, and Miloscia, a former Democratic Representative, in the 30th.

Jayapal was born in India and started OneAmerica, devoted to advocating on behalf of immigrants in Washington state, in the wake of the Sept. 11 terrorist attacks. She champions social justice as well as immigration issues. Habib, whose parents emigrated from Iran, was elected to the House in 2012. Nelson said his experience as a legislator will make him an important addition to her caucus.

The 37th District, covering sections of South Seattle like Rainier Valley, Columbia City and Beacon Hill, is the most racially diverse district in the state, with more than 86,000 people of color, including 31,000 African-Americans, and more than 36,000 Asian-Americans. The district with the next highest level of diversity is the 15th District, based in Yakima County, with 82,000 persons of color, according to state demographic statistics.

“I will work to ensure their voices are heard in Olympia and that they have direct access to the legislative process,” Jayapal said Tuesday. “I’m proud to represent the most racially and economically diverse district in Washington state. But we have a long way to go before the state Senate truly reflects the changing demographics of our state.”