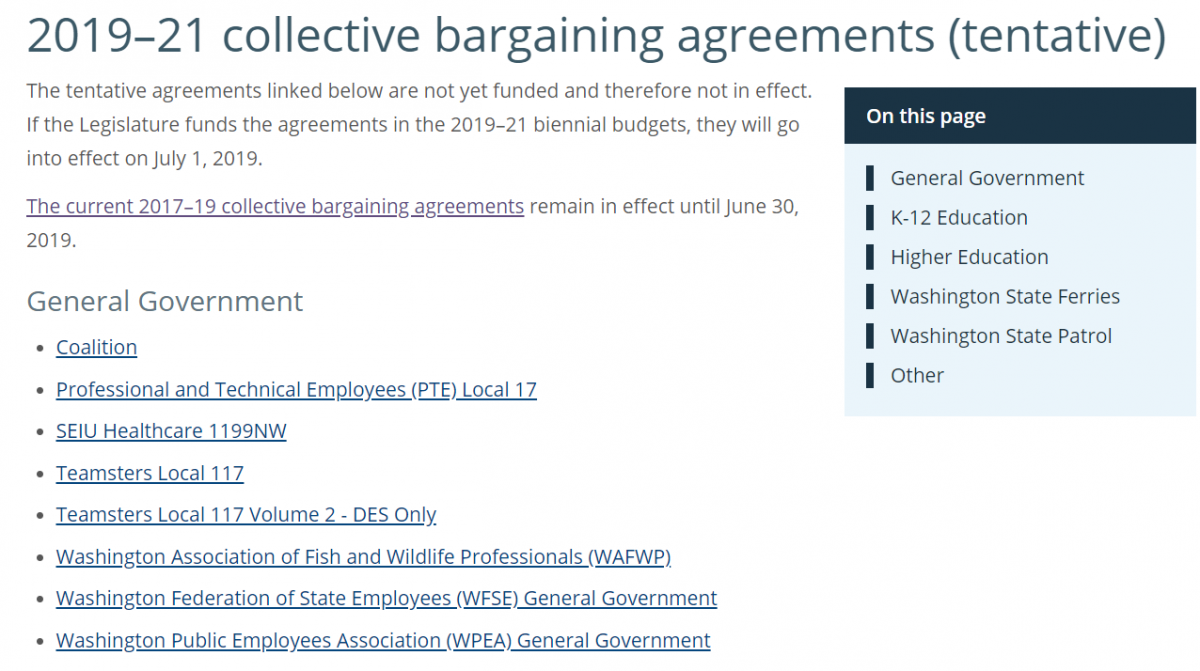 This is the second installment in a three-part interview with Sen. John Braun, Ranking Member of the Senate Ways & Means Committee. In the first installment, Braun gave his perspective on the 2019-21 budget passed in the session that ended on April 28.

In this part of the interview, Braun talks about how collective bargaining agreements impacted that budget and what it was like working with Ways & Means Chair Sen. Christine Rolfes.

Sara Gentzler: To begin, can you give me a rundown of the budgets and taxes that passed this session, from your perspective?

John Braun: (In continuation of his answer transcribed here…)

…We did all this because we need more money. But, the elephant in the room — maybe use some other animal because I don’t want to be partisan — is there was $2.5 billion worth of new spending that was policy-add that we never even talked about. For 105 days, nobody talked about it.

$1.5 billion for the four-year cost for the collective bargaining agreements [was] negotiated by the governor, in private, last summer. We had one work session during assembly days, and we wouldn’t speak of it again — can’t be done, we must pay that bill.

So, we can talk about mental health, we can talk about special education, we can make higher ed beg for a new tax so they get funded. But we will not even talk about this enormous spending we’re going to do for the collective bargaining agreements for the state’s public unions. And recognize, in that $1.5 billion, half of that — if you took $75 million over the four years — would allow you to provide 3% pay increases.

Everybody’s saying they’re just trying to keep up with inflation. First of all, inflation is well below 3%, as I’m sure you know. Second of all, only half that money went toward keeping up with the cost of living. The rest is just more stuff. And it may be good stuff, it may be bad stuff. I don’t know — we wouldn’t even talk about it. We had marching orders from our union overlords to pay the bill and look the other way. And we did. That’s what’s frustrating.

So, I said $2.5 billion, with $1.5 billion for the collective bargaining agreements. The other $1 billion…is for SEBB, the School Employees Benefits Board. Also collectively bargained.

Our goal, in 2017, was to bring the state’s funding for teacher mental health up to the same level as state employees, as PEBB. Which we did — that was already paid for in the maintenance-level budget…The extra $1.5 billion that we whittled down to a billion, that was all extra stuff negotiated by the governor. It’s another collective bargaining agreement that, in spite of school districts begging that the state look at this and not do it this way — because it was going to cost them a fortune in local funding, and that’s a whole other story — we wouldn’t do it.

Again, last thing I’m going to say: We said, we really can’t afford $1.5 billion — or maybe $1.4 billion — to pay what the governor negotiated. So, we’re going to cut it as close as we can inside the budget.

The same thing happens with PEBB sometimes. You say, ‘Well, the actuary thinks the rate is somewhere between’ — and these are numbers that aren’t exact — ‘950 per employee and 1,050 per employee. We know the rate is going to be somewhere in there. Budget writers, you decide.’ Typically, what we do is kind of go in the middle. We don’t want to spend a bunch of money, but we also don’t want to get a big bill when we come back to session next year.

What they did to be able to spend money, is they took it clear to the bottom. The chances that we come back to session next January and we have this big, outstanding bill from SEBB for $200 or $300 million are pretty high.

SG: You mentioned this budget was written in a partisan way. With your experience, in historical context, what does this budget writing look like, behind the scenes? What’s it been like to work with Sen. Rolfes?

JB: I have nothing but good things to say about Sen. Rolfes. She has worked very hard. And, frankly, as you may know, I even voted for her big budget as it came out of the Senate, originally — it spent about a billion dollars less. I didn’t like everything about it, but it was a much better budget than what came out of the House — [it] spent considerably less, it was more thoughtful, it recognized if you’re going to run an organization that costs about $52 billion to run that you have to look for savings. No organization that size is without opportunities for savings.

She had some very reasonable opportunities for savings in there. She was thoughtful.

Now, granted, we disagree on many policy issues. That’s just fine with me, we’re allowed to disagree. And her loyalty — I think, appropriately — is to her caucus. She’s trying to get 25 votes out of her caucus, in the end. But, that said, I thought she did a very good job. She worked hard, she was thoughtful. I think she, honestly, tried to get a budget that was sustainable in the future.

I think that she fell short. And I think that doesn’t necessarily surprise me, given where she was at, negotiating with the House and, frankly, trying to make some members of her caucus happy.

Again, they have different priorities, and I think that they landed in a bad spot for the state. But, that is not because she didn’t work hard. She was very kind and gracious to me, as we worked through it. She did what she could, and we had a very good working relationship.

The third and final installment of this interview includes Braun’s thoughts on Washington’s tax code, the parties’ different narratives surrounding the budget, and forward-looking priorities.