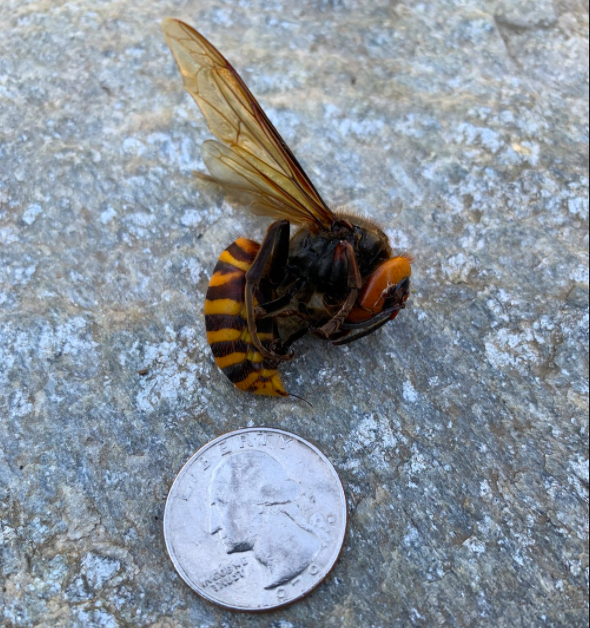 Today the Washington State Department of Agriculture (WSDA) reported the first confirmed sighting of an Asian giant hornet in Washington this year.

On May 27, a resident near Custer, Wash. found the dead specimen while walking on a roadway. The resident submitted a photo and report using WSDA’s online Hornet Watch Report Form. On May 28, WSDA entomologists concluded that the photo appeared to show an Asian giant hornet. The specimen was collected and submitted for laboratory testing the same day. State and federal labs confirmed that the specimen was an Asian giant hornet on May 29.

The hornet was detected near the location of a suspected Asian giant hornet bee kill in 2019. WSDA had already planned trapping in the area and will maintain that plan to try to find any colony that may be there.

The U.S. Department of Agriculture’s Animal and Plant Health Inspection Service (APHIS) has developed response guidelines that include several options for eradicating the Asian giant hornet should additional hornets be detected in Washington State. At this time, there is no evidence that Asian giant hornets are established in Washington State or anywhere else in the United States,” according to Osama El-Lissy, Deputy Administrator, for USDA/APHIS’ Plant Protection and Quarantine program.

The first find of the year in the United States comes just days after the British Columbian government confirmed their first detection of the year in Canada near Langley, B.C. That specimen was initially reported to authorities on May 15.

Since the specimens were confirmed in Washington late last year, state entomologists have been working with USDA to create trapping and eradication plans for this invasive pest in order to protect honey bees and the hundreds of crops in Washington that depend on those bees for pollination.

This is truly a collaborative effort,” Sven Spichiger, managing entomologist for WSDA’s Pest Program, said. “From federal and state partners to individual beekeepers and proactive community members, it will take all of us working together to locate and eradicate Asian giant hornets from our state.”

WSDA plans to locate these hornets through trapping and public reporting of Asian giant hornet sightings. Members of the Mt. Baker Beekeeper Association have also partnered with WSDA to place experimental traps.

Although not typically aggressive toward humans, Asian giant hornets do pose a human health threat. Their string is more dangerous than that of local bees and wasps and can cause severe pain, swelling, necrosis, and, in rare cases, even death. Anyone who is allergic to bee or wasp stings should not approach or attempt to trap for Asian giant hornets.

This press release was provided by the Washington State Department of Agriculture.