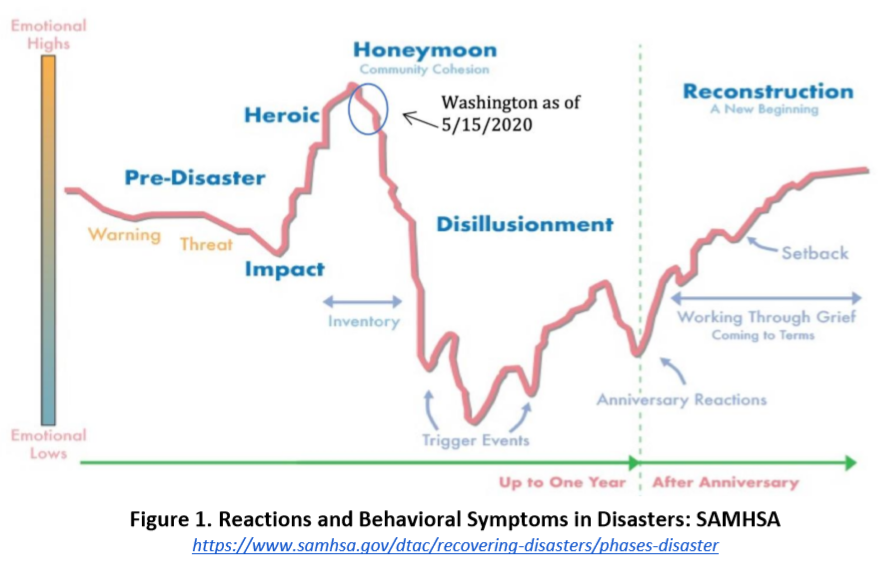 A document from the Washington State Department of Health (DOH) forecasts a worrisome outlook for the potential behavioral health impacts of COVID-19. The document is informed by previous trends and research on natural disaster recovery and response.

According to the DOH, behavioral health impacts on Washingtonians will be seen in phases, with peak impacts expected 6-9 months after the initial outbreak. This, says the document, will potentially coincide with a second wave of infections.

The DOH last updated the document on May 15, at which point they categorized Washington as being close to the “honeymoon” phase – meaning, this is the peak period of emotional highs for the pandemic. After the honeymoon, the chart shows a rapid increase in emotional lows. It may take up to a year following the outbreak for the state to enter the “reconstruction” phase.

In terms of symptoms, early months after the outbreak are characterized by anxiety, increased aggression, law-breaking, and withdrawal. This transitions into depression, grief, and loss 3-6 months post-outbreak, followed by increased rates of suicide, intimate partner violence, and child abuse.

“Based on population data for Washington, and known cycles of common psychological responses to disasters, we can reasonably expect that between TWO to THREE MILLION Washingtonians will experience behavioral health symptoms over the next three to six months. Symptoms of depression will likely be the most common, followed by anxiety and acute stress. These symptoms will likely be strong enough to cause significant distress or impairment for most people in this group,” states the DOH.

A “return to baseline levels of functioning” for many people is expected to occur 12-14 months post-outbreak, but that assumes a potential second wave of infections is stabilized by then.

Based off past trends, an estimated 10%-33% of individuals experienced symptoms of acute stress within the first month of the initial virus outbreak. But, unlike a typical natural disaster that occurs at a single impact point in time, the COVID pandemic will also lead to chronic, ongoing social and economic disruption. DOH estimates a potential 30-60% rate of depression in Washington’s general population (2.25 million – 4.5 million people) due to the ongoing disruption. Substance-related disorders will also likely increase during this time, says the DOH.

The report also describes the connection between suicide rates and unemployment.

“For every percentage point increase in unemployment rates (i.e., 1%), there is a 1.6% increase in suicide rate,” it states.

An unemployment rate increase of 5% means approximately 103 additional people will die by suicide; a rate jump of 20% equates to 412 additional deaths.

“In Washington, the highest risk of suicide will likely occur between October and December 2020. This is consistent with known cycles of disaster response patterns. Seasonal affective disorder exacerbates mental health challenges at that time of year due to increased hours of darkness and inclement weather, as does the occurrence of winter holidays, which are often an emotionally and financially difficult time of year for many people,” reads the report.

To prepare for this bleak outlook, the DOH offers strategies to behavioral health systems, providers, and public messaging teams. The Department says preparation efforts in the coming months should focus on increasing social connections, activating community supports, transparent communication about the pandemic, and education about the disaster response cycle so individuals know what to expect in terms of behavioral health changes.

DOH says it will update the forecast monthly.