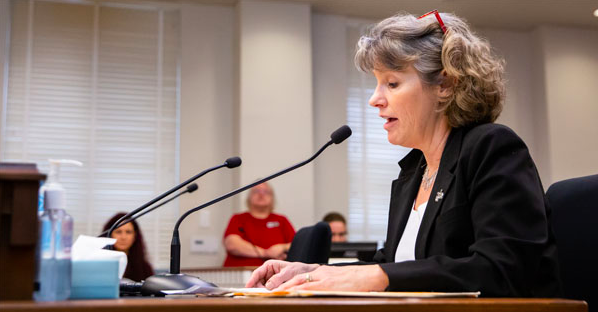 The endorsements could be an indication that Doglio, a Democrat, is consolidating support among the progressive wing of the party ahead of the August primary.

The was race for the 10th District was blown wide open after longtime incumbent Denny Heck announced his retirement from Congress. Heck is running for Lt. Governor.

Among the list of notable endorsements Doglio has received is the Congressional Progressive Caucus (CPC) PAC, the Washington State Labor Council, and Congresswoman Pramila Jayapal.

The CPC PAC, the political arm of the Congressional Progressive Caucus, announced their endorsement earlier this month and cited Doglio’s progressive platform.

Voters who want bold progressive leadership in Congress will have a champion in Beth Doglio,” said CPC PAC Co-Chairs Mark Pocan, Pramila Jayapal, and Jamie Raskin. “Throughout her activism and public service, she has been a staunch ally for working people and we look forward to working alongside her in Congress.”

Doglio has embraced several of the marquee policy positions championed by the Democratic Party’s left flank.

I am honored to be endorsed by the Congressional Progressive Caucus PAC and look forward to working together with these leaders to enact a Green New Deal, Medicare for All, and so much more,” said Doglio. “The bold policy priorities championed by the CPC recognize the enormous challenges facing our country and present inspiring and needed solutions that effectively meet the scale of these ongoing crises, while ensuring no communities are left behind.”

Major players in organized labor are also coalescing behind Doglio. Delegates of the Washington State Labor Council – the state’s largest labor organization – voted this past weekend to award Doglio the WSLC’s sole endorsement.

Leading efforts to strengthen prevailing wages, allow part-time workers to organize, and protect the health of firefighters and first responders, Beth Doglio has been a champion for the needs of working people in Washington state, now we need her doing the same in Washington D.C,” said WSLC President Larry Brown.

Over 600 local unions are currently affiliated with the WSLC, representing approximately 550,000 rank-and-file union members in Washington.

In the “Issues” section on Doglio’s campaign website, she writes that she wants to “strengthen the union movement and make it easier for employees to organize.” She is also pledging to make reforms to labor law to shore up collective bargaining and increase apprenticeship opportunities.

In the 2018 session, Doglio sponsored HB 2669 which added part-time employees to state civil service, making it possible for them to unionize.

Rep. Jayapal issued her own individual endorsement of Doglio in addition to the one issued by the CPC, which she co-chairs.

I am proud to endorse Beth Doglio and cannot wait to have her strong, progressive voice in Congress,” said Jayapal. “As a legislator, organizer and climate champion, Beth has a proven track record of standing up for working people against special interests, and delivering on policies that matter. Washingtonians need to send Beth to Congress to join me in moving forward bold solutions like Medicare for All and the Green New Deal, and fighting for working families, women and underserved communities.”

In her endorsement announcement, Jayapal also said Doglio’s climate plan demonstrated her commitment to addressing the “interrelated challenges of the climate crisis.”

Doglio summarizes the plan as a combination of a COVID stimulus and a Green New Deal. She has also been endorsed by the League of Conservation Voters.

Outside of the Legislature, Doglio has worked at Climate Solutions – a Northwest-based clean energy economy nonprofit – since 2007, where she is currently listed as a Senior Advisor.

FEC reports for the first quarter of 2020 reveal that Doglio raised the third most in her race, raking in contributions totaling $239,639. She trailed fellow state representative Kristine Reeves who raised $274,058 and former Tacoma Mayor Marilyn Strickland’s $251,639 haul.

As far as progressive endorsements, Reeves is supported by unions such as the Laborers’ International Union of North America and several Teamsters locals. She also secured the support of the Washington Education Association and progressive state legislators such as Joe Nguyen, Eric Pettigrew, and Melanie Morgan.

The earliest entrant in the race, 26-years old truck driver and self-described socialist Joshua Collins has raised $205,823 since he began campaigning in January of 2019. Collins has attracted attention due to his prolific social media presence and left-wing platform. The most notable endorser of Collins is Kshama Sawant, the socialist firebrand Seattle City Councilmember.

Collins drew some criticism online last week after deactivating his Twitter account for a short period of time, which worried some of his followers. Collins’ Communications Director later said the app was making it difficult for Collins to sleep.

After initially saying he would run as a Democrat for the electoral advantages of doing so, Collins listed “Essential Workers” as his party preference on his campaign filing declaration.

Washington State’s top-two primary is scheduled for August 4th. Under this system, the two finishers who receive the most votes advance to the November general election, regardless of party preference.