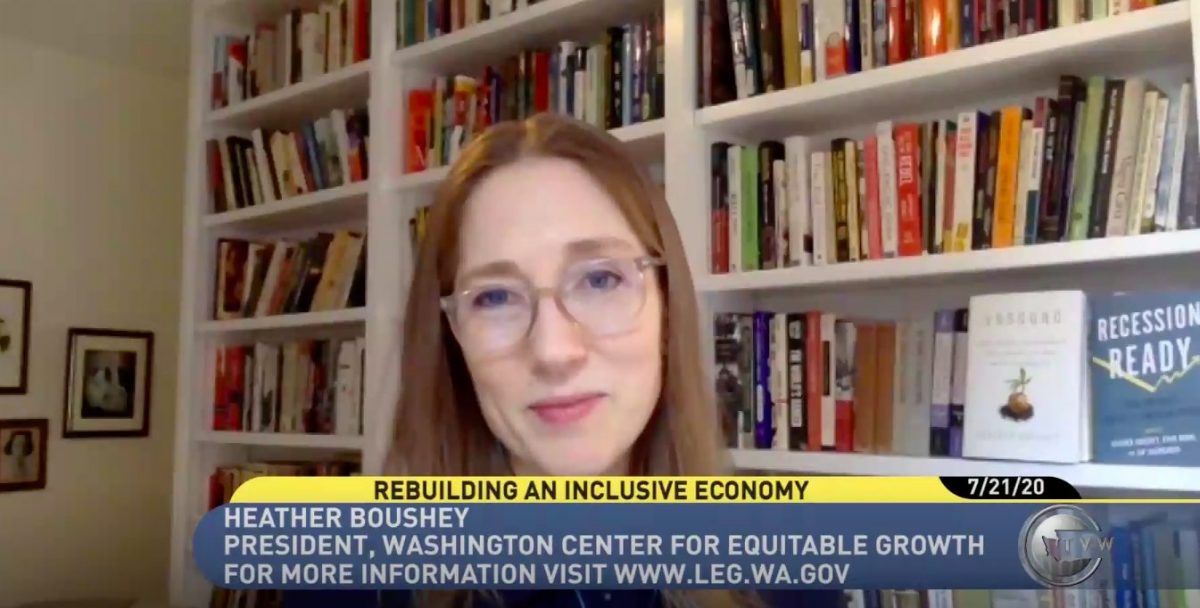 An intersectional perspective on economic recovery

In the first hearing, conducted on June 16th, economists and local business officials laid the groundwork for further exploration into how policymakers can steer Washington State toward economy recovery as the COVID-19 pandemic wears on.

At this second hearing, the committee discussed the historical context and future policy considerations relevant to rebuilding the state’s economy in an inclusive fashion.

The first section of the hearing dealt with how the state can rebuild the economy through an “intersectional perspective.” Intersectionality is a term often used to describe how power imbalances operate based on intersecting aspects of a person’s social and political identities.

To bring this intersectional perspective to the policy discussion surrounding economic recovery, the committee heard from Dr. Heather Boushey, President & CEO and co-founder of the Washington Center for Equitable Growth. Boushey is an economist whose work focuses on the intersection between economic inequality, growth, and public policy.

Boushey contextualized her recommendations for building an inclusive post-COVID-19 economy by offering a reminder of where the nation’s economy was before the pandemic.

Before the coronavirus hit our shores we were in the longest economic recovery in US history, yet we saw in many ways the gains of that growth were not being broadly shared. Even as top line economic indicators signaled to policymakers that our economy was growing – in 2019 and earlier we had historically low unemployment, we had an annual GDP that was growing at about two percent per year – wages were not growing commensurate with that tight labor market. And indeed, we saw that the fruits of economic growth in terms of not only income, but wealth, were diverging sharply,” said Boushey.

As scholars have analyzed these economic trends more closely, said Boushey, they’ve noticed a broader systemic trend toward the obstruction of the supply of people and ideas into the economy, ultimately exacerbating inequality and slowing productivity growth.

Furthermore, Boushey said that high levels of economic inequality can lead to the subversion of institutions that manage the market, rendering political systems ineffective and labor markets dysfunctional. Together, these factors slow down growth and destabilize economic output.

To address these deleterious trends, Boushey emphasized the importance of enacting policies that constrain inequality at the top and counter the concentration of economic power across society.

Connecting these preexisting economic trends with the current state of the economy, Boushey noted that on the onset of the pandemic, the Center for Equitable Growth predicted that the economic crisis in the United States would be deeper and more protracted than the country’s competitors.

This prediction was informed by observable decisions made by government, both at the federal and state levels, that have resulted in the underlying economic fragilities described above. These same very decisions, according to Boushey, offer a roadmap for structuring an inclusive roadmap to economic recovery.

First among these decisions, is handing off too much of government’s obligations to the private market, said Boushey. She credits that decision with what many view as a failed federal response to the pandemic.

The economic challenges we are facing are 100 percent because we have not had the capacity, or the institutions have not been capable, of keeping the coronavirus in check compared to other countries. So, the economic damage has been much greater and more far reaching than it needed to be.”

Bouchey went on to make a prediction regarding the intersection between COVID-19 transmission and economic policy at the state and local levels, saying that evidence would indicate that states and localities with paid sick days and paid family and medical level would see lower transmission rates.

While Washington State does have policies in place to ensure paid sick days and paid family leave, Boushey said “a quarter of all US workers and seven out of 10 low income workers did not have access to paid sick days.”

Responding to a question from Sen. Rebecca Saldaña about how the state’s tax base and economic diversification might intersect to impact economic recovery, Boushey said Washington’s primary impediment to reversing inequality and concentrated economic power would be its tax structure.

What we know from decades of economic research is that relying on the kinds of taxes that Washington does is highly regressive, and that shows up in the data…While Washington State has had income growth and has diversified its economy, it’s not like having this regressive tax structure has made it the fastest growing state every year for the past 50 years,” said Boushey.

Responding to a question from Sen. Shelly Short – who represents a rural district in Eastern Washington – about how manufacturing would play into long term economic recovery, Boushey said the pandemic has revealed a weakened manufacturing base and hampered supply chains.

Boushey derived confidence from the increased awareness surrounding the importance of a robust manufacturing base. This awareness could motivate policymakers to support tax incentives that encourage onshoring and local investment.

At the hearing, the committee also heard from experts on broadband, health care, and local economic development to assess how those issues will impact the state’s economic recovery. A video of the entire hearing can be viewed on TVW.