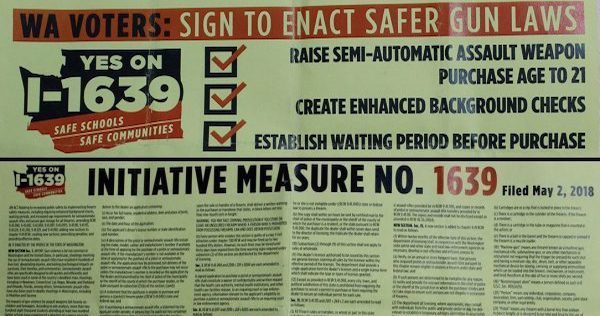 A lawsuit, a “sanctuary city,” and a White House petition challenge I-1639

When Washington voters approved I-1639, the state’s expansive gun safety initiative, by nearly 60 percent, it seemed it was only a matter of time before it faced backlash. Now, in the week following election day, pushback on the initiative is coming from multiple angles.

This week, a petition was filed with the White House asking the president to step in and abolish the law, gun-rights advocates filed a lawsuit challenging 1639’s constitutionality, and a Police Chief in Ferry County declared he will not enforce the provisions of the initiative.

I-1639 has faced legal challenges multiple times on its path to the ballot. In May, before the Alliance for Gun Responsibility (AGR) began its signature gathering campaign, AGR, the NRA, and two citizens filed petitions challenging the initiative’s title and summary description. Then in June, SAF and the Citizens Committee for the Right to Keep and Bear Arms filed a petition challenging the language used on signature gatherers’ petitions, but it was later dismissed.

On the same day that the Secretary of State’s office officially certified I-1639, two new legal challenges were brought forth separately by Alan Gottlieb, founder and Executive Vice President of SAF and the NRA. A Thurston County Superior Court judge ruled at the end of August that the petition sheets used for I-1639 violated state law and ordered the initiative off the ballot. However, a week later the Washington Supreme Court overturned the ruling and ordered the initiative back on the ballot.

The most recent legal challenge comes from the Second Amendment Foundation (SAF) and the National Rifle Association (NRA) — the organizations filed a lawsuit on Thursday in federal court challenging the constitutionality of certain aspects of the initiative.

“I-1639 drastically rewrites statutes governing purchase, sale, and ownership of firearms in common use in the state of Washington. It thereby infringes the Plaintiffs’ right under the Commerce Clause, U.S. Const. Art. I § 8 Cl. 3, and the Second and Fourteenth Amendments to the United States Constitution,” states the lawsuit.

Joining SAF and the NRA as plaintiffs in the lawsuit are two firearms dealers (the “Dealer Plaintiffs”) and four 19-20 year old Washington residents (the “Young Adult Plaintiffs”). The plaintiffs contend 1639’s ban on the sale of semiautomatic rifles to individuals under 21 is a violation of the Young Adult Plaintiff’s 2nd amendment rights. The initiative also bans the sale of semiautomatic rifles to non-Washington residents, which the plaintiffs claim is a violation of the U.S. Constitution’s Commerce Clause.

The lawsuit doesn’t specifically question the constitutionality of other aspects of the initiative, such as enhanced background checks or safe storage provisions, but asks that the Court stop the enforcement of 1639 in its entirety unless the law is ruled severable.

The initiative is also being challenged outside of the courts. On Tuesday, former Congressional candidate Jered Bonneau filed a White House petition asking the President to “step in and abolish such laws restricting, infringing upon and/or otherwise limiting our right, that has been guaranteed to us within the 2nd amendment of the Bill of Rights.” The petition states the initiative was passed through “fraudulent petitioning and tricky wording.”

So far, the petition has 32,598 signatures; it needs 100,000 by Dec. 13th to get a response from the White House. The Constitution does not give the President the authority to abolish state laws, rather, constitutionality is ultimately decided by the Supreme Court.

Meanwhile, in Republic, Washington, Police Chief Loren Culp has proposed turning the city into a “Second Amendment Sanctuary City” and has said he will not enforce the mandates outlined in 1639. Culp told iFiber One that he disagrees with the initiative in its entirety and that the second amendment and the Washington Constitution will shield him from any potential backlash from not enforcing the voter-approved initiative.

On the Republic Police Department’s Facebook page, Culp posted a proposed ordinance outlining the establishment of the Second Amendment Sanctuary City. The ordinance would prohibit Republic employees or corporations that provide services to the city from participating in the implementation of the laws. It also calls upon neighboring communities and other local jurisdictions to issue similar ordinances.

In the comments section of the Facebook post, Stevens County Commissioner Don Dashiell wrote, “we’ve been working on something similar in Stevens County.”