In the latest Washington State Wire poll, Jenny Durkan has opened a commanding lead in her race to become Seattle’s next mayor.

She leads her opponent Cary Moon 51% – 26% among likely voters in the November General Election.  You can view the report and topline results here. 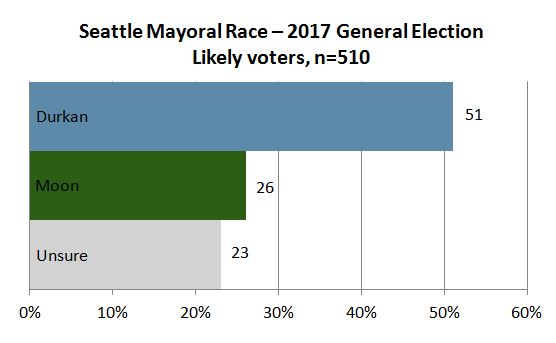 Cary Moon has been trying to connect Jenny Durkan to Ed Murray and his regime, saying that “Seattle voters are looking for a change” during our recent podcast interview with her.  However, respondents did not appear to be heavily influenced by Ed Murray’s resignation.  Only 15% of respondents said it influenced them, and of those the split in voter choice slightly favored Durkan.

Some Seattle political observers had thought that the non-Durkan voters in the primary would likely move towards Moon as a more progressive alternative in the general election.   That does not appear to be happening either. According to this survey, respondents that voted for someone other than Durkan or Moon and respondents that did not vote in the August primary, when combined, were supporting Durkan 28%-23%.

In other words, there appears to be no such progressive coalescing among either way among voters that voted for neither candidate in the primary or which didn’t vote at all.

The poll had 510 completed responses among voters that had voted in 3 of the last 4 primary and general elections in 2013 and 2015.  Respondents were also asked whether they intended to vote in the November election.  If they said no or were unsure, the call was terminated.