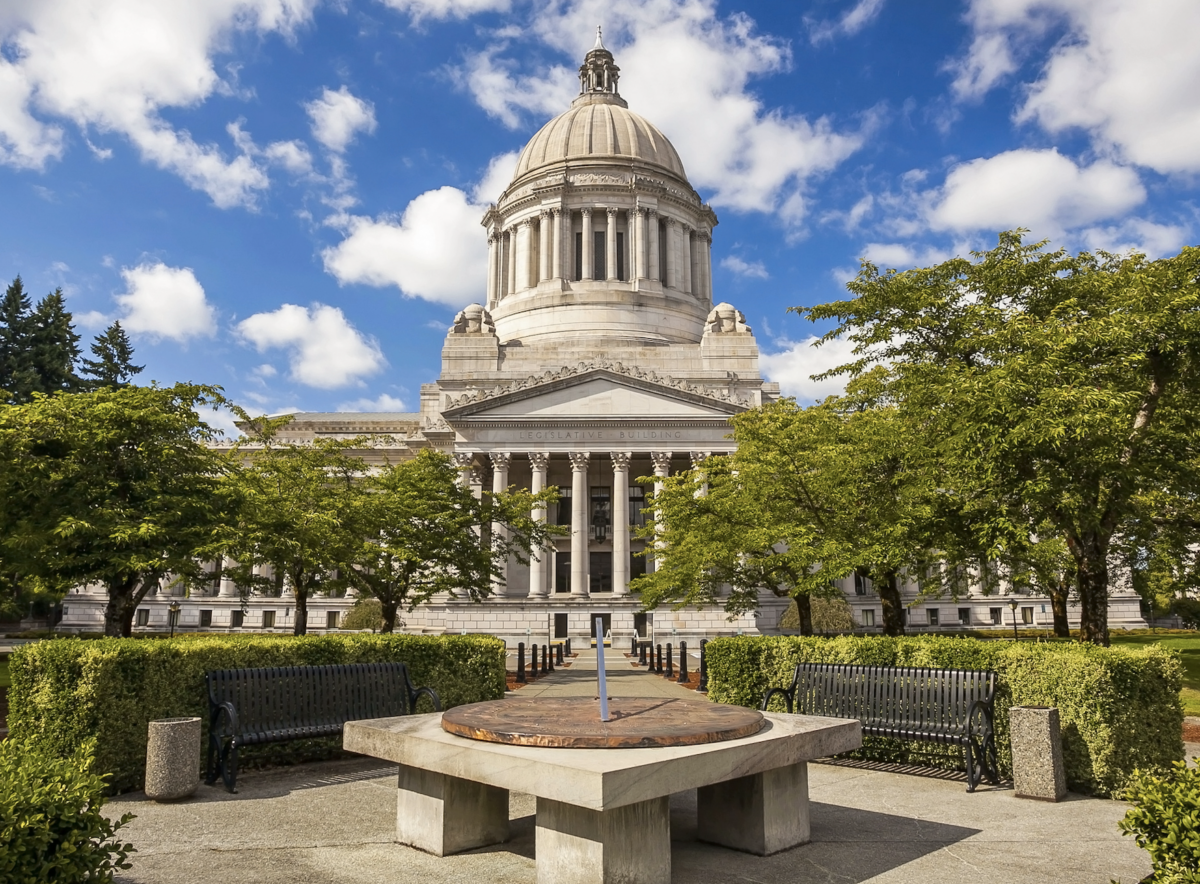 Plus: a truce in the weed wars, unionization for the Legislature’s staff, and more redistricting weirdness

Today’s the day the big budget compromises get rolled out in the Legislature. The operating and capital budgets have been in closed-door negotiations for several days as lawmakers wrangled over how to spend a flood of new tax revenue and federal aid.

By rule, the budgets have to be made public, or “sit on the rail” for 24 hours before lawmakers take a final vote on the deal. That has to start today for the Legislature to get out of town tomorrow. We’ll also see the final versions of the state’s big transportation package, including what they’re going to do about that exported fuel tax that ain’t happening.

In their weekly press conference, leaders of the Democratic majorities in the House and the Senate took a lot of heat from our sisters and brothers in news on Tuesday for the opacity of this process, which doesn’t allow for much journalistic or other scrutiny of the deals before lawmakers have to push the “yea” or “nay” buttons. The leaders argue that the time crunch is a function of the fact that the budget deals have to account for all the other legislation that’s going to pass.

And some of that Legislation is still moving around. Here’s a look at a couple of things that are emerging from the process rather late.

A sort-of truce in the weed wars

Early in the year, we took a deep dive into the fractious factions of Washington State’s legal cannabis¹ industry, especially the aggressive lobbying agenda of the Washington Cannabusiness Association, which was looking to cut itself into the burgeoning and currently unregulated market for hemp-derived products critics condemn as “lab-grown frankenweed.”²

The association’s bill died, but so did a competing proposal on that issue, pushed by the Washington State Liquor and Cannabis Board, to outright ban the unregulated sale of hemp-derived products, which nearly everyone agrees is a problem³. That bill failed in the House unexpectedly, along with a bunch of other stuff we wrote about a couple of weeks back.

This prompted the many folks who care about this issue to find a way to take advantage of the get-out-of-jail-free card that exempts things from all these deadlines: the budget loophole. Things that are “necessary to implement the budget” or “NTIB” are exempt. Enter Senate Bill 5983, which wasn’t even introduced until Feb. 28, after most of the procedural deadlines had passed.

As written, it looked a lot like that House bill that died unexpectedly, except now it had a new temporary $25 fee on some tobacco retailers. That $25 fee is the magic NTIB fairy dust because the revenue from the fee gets written into the budget.

Here’s where things get a little weird. Late Monday evening, the Senate Ways and Means Committee voted to replaced most of the language in that bill with an amendment that included some, but not all, of the things that the Cannabusiness Association was looking for earlier in the session.

It does ban the unregulated sale of the most powerful hemp-derived products, but it doesn’t yet give the Liquor and Cannabis Board broad authority to regulate them. And it convenes a panel of scientists and experts at Washington State University to study the issue and make recommendations.

Controversial legislation is often a multi-year play, so think of this as an incremental win for the Cannabusiness Association. Expect a full Senate vote sometime today or Thursday.

In that same Ways and Means Hearing on Monday, another bill that rose from the dead continued to show new life — the idea of allowing the Legislature’s own staff to unionize. Democratic leaders in the House got a ton of bad press when an earlier version of this bill died in a committee. For a caucus with such deep ties to organized labor, it’s just wasn’t a good look.

Hence House Bill 2124, also introduced after many of the procedural deadlines had elapsed. It was deemed “necessary to implement the budget” and passed the House last week. But the version that passed the Senate committee on Monday — brokered by moderate Democratic Sen. Mark Mullet, may not make all the folks that are clamoring for this change all that happy.

Among the issues it exempts from bargaining are the long hours that the Legislature’s employees must put in when lawmakers are in session. Expect a vote today or Thursday.

Once again, Democratic leaders in the Legislature are hoping that a court will tear up the bipartisan compromise on new boundaries for lawmakers’ districts. We saw this play out in the fall when the Washington Redistricting Commission missed its deadline and briefly tossed the map-drawing chore to the state Supremes.

That was was mostly about the new majority-Latino 15th District in the Yakima Valley. Well, the Supremes brushed off the notion that they should take over the job and ruled that it was fine by them that the commission was a day late.

Latino activists sued over the 15th in federal court, arguing that it violated the Voting Rights Act. The district is narrowly majority-Latino but leaves some heavily Latino areas in Yakima and nearby communities in the neighboring 14th District, a technique known as “cracking⁴,” making it theoretically less likely that Democrats could win in the 15th.

Here’s where things get weird, and we get into some seriously inside baseball: The lawsuit named Senate Majority Leader Andy Billig, House Speaker Laurie Jinkins, and Secretary of State Steve Hobbs. Thus far, all three are refusing to defend the redistricting plan. Billig and Jinkins asked to be dismissed as defendants, essentially arguing that their involvement in the process was limited to appointing the redistricting commissioners⁵, while Hobbs, who until recently was part of Billig’s caucus, pronounced himself neutral in a court filing. (Billig reiterated on Tuesday that he opposes the 15th as drawn and doesn’t want to defend it.)

The commission itself wasn’t named in the lawsuit, almost certainly by design. On Monday, the four redistricting commissioners deadlocked on whether to intervene in the case, with both Democrats — April Sims for the House Democrats and Brady Walkinshaw for the Senate Democrats — voting no. This prompted the non-voting chair of the commission to resign in protest with a blistering statement:

“By failing to defend the redistricting plans agreed to by consensus, state authorities have chosen to undermine the process and dismiss the compromises undertaken in the public interest.  These actions effectively pit two vulnerable communities against each other in my community, and my integrity prevents me from participating in it.”

So as of now, we essentially have a gravity check⁶. Nobody from the state of Washington is planning to defend the lawsuit by arguing for the validity of the compromise map. That could increase the likelihood of its success. But the whole thing is very muddled. In theory, the court could refuse to dismiss Billig and Jinkins, or the complaint could be amended to name the redistricting commission, but that agency is due to dissolve in July.

Meanwhile, another Voting Rights Act lawsuit is in the works from the opposite end of the political spectrum. We’re told it will argue that the 15th was improperly drawn by race for no compelling state purpose, an argument that has been used to invalidate districts “packed” with minority voters in other states.

Thank you for your attention. The Morning Wire is the free midweek update from the Washington State Wire. It’s made possible by the paid subscribers to our sister publication, The Washington Observer. To get access to The Sunday Observer and the warm glow of supporting independent journalism, please consider joining them.

1 The weed people — sorry, the cannabis people — would really prefer that we referred to it as cannabis. While they kinda-sorta have a point in that marijuana was long lumped in with more dangerous recreational substances because “marijuana” has about three times the headline count of “drugs,” we’re just going to nope them. In fairness, we also prefer the slangier and more evocative “booze” instead of the stodgy and faintly censorious “liquor.” Also, the formative cultural impact of Cheech and Chong cannot be overstated.

2 LCB Chair David Postman gets credit for “frankenweed.” If you’re late to this issue, “hemp” and “marijuana” are the same plant. Under current law, only THC extracted from marijuana grown within Washington’s regulated market can be used in regulated products. But the broad legalization of growing low-THC hemp outside that market has created a flood of unregulated products sold in convenience stores and gas stations. Those things are made from cannabinoids similar to but not identical to the THC in regular marijuana. Many regulated weed farmers find this deeply alarming because growing unregulated hemp is much cheaper.

3 Both markets excel at producing a gummy bear that will leave you thoroughly couch-locked for a few bucks. The kids, as you might imagine, gravitate to the market that doesn’t hassle them about their IDs.

4 “Cracking” and “packing” are the two classic techniques of gerrymandering. The first divides communities so they can’t prevail in elections. The second concentrates them so they prevail only in isolated districts.

5 This is patently ridiculous. Much of the actual work of the redistricting commission was done by the partisan staff of the four caucuses, as noted in this entertaining memo from one of them.

6 I really can’t improve on the Urban Dictionary for a definition of this useful phrase from my youth: “The term originates from hacky sack. A gravity check is when an easily playable sack hits the ground only because it was coming down equidistant between two or more players and each player didn’t make an attempt because they thought someone else would play it.”