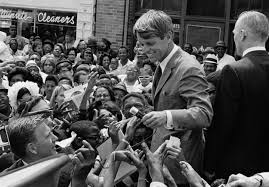 The lessons of Robert Kennedy’s moral leadership on race relations

Historians have offered that this weekend was the worst scene of civil unrest in America since 1968.

The protests and the riots; the deaths and police violence; the store owners and the anger; the anarchists and the peaceful protesters.

On April 4th, 1968, Martin Luther King was assassinated by a white man in Memphis. He was 39 years old.

King was giving voice to all of those who were excluded in America, including the Black man in Atlanta, the white woman in Appalachia, and the brown man fighting in Vietnam.

Indeed, many would argue he was the first man to give such a voice to the improvement of basic civil rights in America since Ulysses S. Grant served as President of the United States from 1869 to 1877.

So, when Robert Kennedy found himself on the campaign trail in Indianapolis on April 4th, the day of King’s murder, he was scheduled to speak at a rally on 17th and Broadway, in the heart of the African-American community.

When he arrived, the large, assembled crowd of mostly African-Americans had not yet learned of King’s death.

Campaign aides worried about his personal security if the crowd became unruly. The Chief of Police said his forces could not protect him if the attendees began to riot.

Kennedy did not hesitate. He skipped a meeting at his campaign headquarters after landing in Indianapolis and immediately went to the rally.

He climbed in the back of a flat-bed truck, which hosted his make-shift podium. He would be the first to inform the crowd of the nation’s loss.

I have bad news for you, for all of our fellow citizens, and people who love peace all over the world, and that is that Martin Luther King was shot and killed tonight.

The audience gasped. Some shrieked and cried out.

Here was a white man speaking to a Black community, following the murder of an American leader by a white domestic terrorist.

Kennedy had a unique level of credibility on the topic of assassinations, however.

For those of you who are black and are tempted to be filled with hatred and distrust at the injustice of such an act, against all white people, I can only say that I feel in my own heart the same kind of feeling. I had a member of my family killed, but he was killed by a white man. But we have to make an effort in the United States, we have to make an effort to understand, to go beyond these rather difficult times.

His personal experience with murder gave him some a unique voice.

His call was powerful, in part, because it was true.

Many cities were set ablaze that night and in the days that followed as a result of King’s murder.

Indianapolis was largely spared from such violence.

He told them to have love and compassion in their hearts.

This call was informed by King’s own rhetoric, which was taken from the teachings of Jesus.

There are seven months left in the year ahead of us. Perhaps Kennedy would argue, as would have King, that we should act in a way of our choosing for the country we hope to leave to our children.

That we should pursue a politics that builds a better world; that we should lead with compassion for the state in which others find themselves; and that our calling should be to address the systemic inequalities that keep white, black, brown and all Americans from the full promise of our republican democracy.