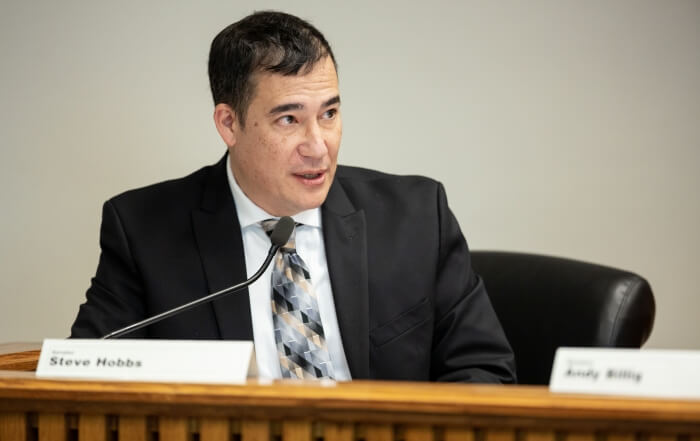 The middle ground would probably be unpausing the projects and letting us go through the budget process like we normally do and working with the governor’s office to try to get some of his priorities,” said Hobbs.

On January 18th, Gov. Inslee directed the Department of Transportation to delay certain projects scheduled to be advertised between January 11 and April 30, 2021 for bids until he and Legislature reach an agreement on the 2021-23 transportation budget.

Of the the nine delayed projects, three are located in Snohomish County. Two of the projects are on Highway 9 in Lake Stevens and the third is the interchange of Highway 529 and I-5 in Everett.

The projects were included in the 2015 Connecting Washington transportation package.

In a Tuesday media briefing, Sen. Curtis King (R – Yakima) decried Inslee’s decision to pause the projects as well as the other priorities included in the governor’s transportation package.

He spends money like he has it. And where does he take it out of? Of course he takes it out of our highway projects. So I think it’s not going to be well received in the Senate but we’ll see. I will tell you, speaking for Sen. Hobbs, that three out the nine projects happen to be in Snohomish County. I find that interesting. I’ll just leave it at that,” said King.

Hobbs and Inslee have been on opposing sides of similar issues in the past.

Hobbs says that he knew certain projects were going to be paused but he didn’t know which ones. He learned that three of the projects were in his district the day before the governor’s list of affected projects was made public.

I knew they were going to pause things. I showed my displeasure, but I didn’t know which ones would be affected,” Hobbs continued.

Washington is under a federal court order to repair over 1,000 culverts that have hampered salmon migration. As a result, Inslee’s transportation budget includes $726 million for the repairs — almost triple the current appropriation. Other investment priorities for the governor include road preservation and the electrification of ferries.

Without a new revenue stream to help fund all the priorities in his transportation budget, Inslee decided to delay the projects to give himself and the Legislature “more financial flexibility to determine how to address our significant transportation budget challenges during session.” Separate budgets proposed by the House and Senate during session will result in a final spending plan.

Hobbs says the projects paused by Inslee should not be contingent on negotiations with the Legislature, though he supports some of Inslee’s priorities.

In a December interview with the Everett Herald, Inslee said that delaying a few projects in a multibillion dollar package does not mean promises won’t be kept, as the projects are still slated to happen eventually.

Looking ahead to crafting the 2021-2023 transportation budget, Hobbs says he is working on a bipartisan approach.

We’re working on a package that not only survives a vote in both chambers and having the governor support it, but also all Washingtonians. At the end of the day, they’re the ones paying taxes and ultimately, these things can be challenged at the ballot box. What we don’t want is for the people in the state to get a lopsided transportation package and reject it, forcing us to start all over again.”