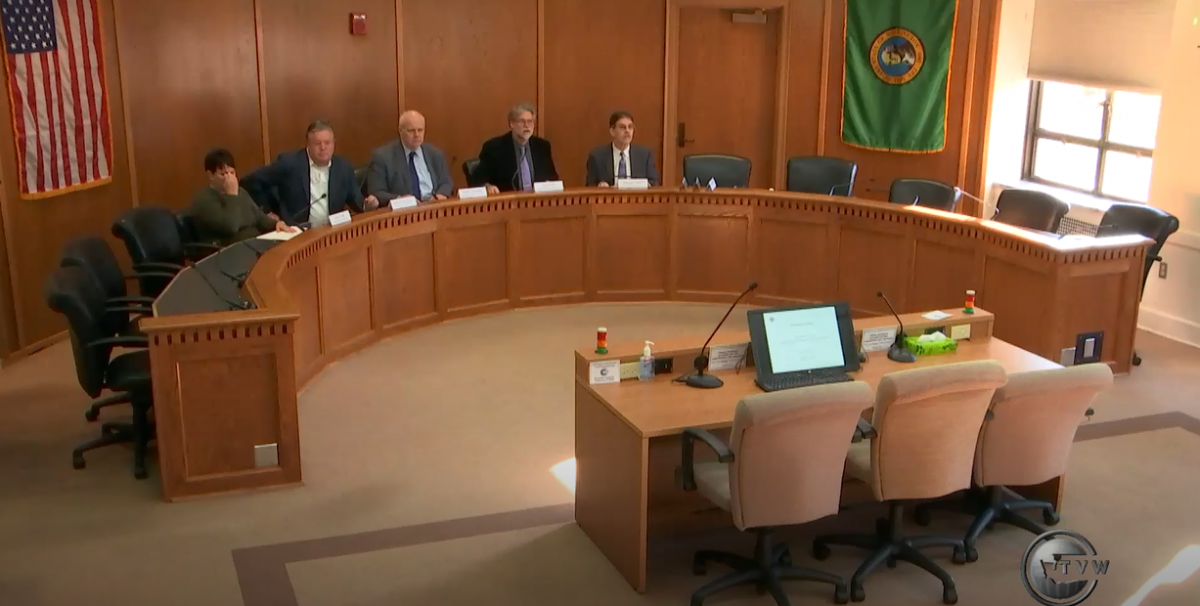 Revenue forecast balloons to more than $600 million this biennium

The Washington State Economic & Revenue Forecast Council approved and adopted its latest revenue forecast for the state today, pointing to similar figures they saw in November, with some slight differences.

An increase in state taxes and a jump in property taxes increased the projected forecast to $606 million over what the economic forecast projected in November, putting the total estimated revenue gain at a total of $1.5 billion since the end of last year’s legislative session in April.

Council staff cited a rise in state taxes accounting for more than half of the new forecast. The jump in property taxes, too, contributed to the $606 million total because in November, state officials didn’t have finalized assessed value data for homes in the state.

“When we got that information, it turned out to be higher than what we had in November,” said Stephen Lerch, executive director and chief economist to the council. “So that increases the property tax forecast for this biennium as well as next biennium.”

One of the most distinct differences in the latest revenue forecast is the higher levels of personal income, which Lerch attributed to increased residential construction in recent months. A $100 million increase in sales tax revenue, as well as a smaller increase in B&O taxes, contributed to the revenue forecast changes this biennium.

The forecast also pointed to good labor markets, strong activity both nationwide and in the state and strong consumer confidence, according to Lerch’s presentation. Despite the economic gains, some concerns Lerch voiced included the delay of Boeing 737 MAX planes production.

Similarly, the council saw a decline in the production of transportation equipment, largely linked to the 737 production delay. Other industry declines included a dip in the output of agricultural products and in other manufactured goods.

Coronavirus emerged as a cause for concern in recent weeks, too, as many companies in Washington do business with China, Lerch said. With some Washington companies basing some or all of their supply chain in the country and commercial activity occurring between Washington and China, the ERFC expressed concern on what COVID-19, the latest coronavirus outbreak, would do to the state’s economy.

“It currently has the potential for negative impact on travel, tourism and on firms in the United States whose supply chain is based, in whole or in part, in China,” Lerch added. “We know some industries were importing things from China and we have a lot of Washington firms selling to China. So there’s certainly some risks there.”

“We may have seen the end of this round of contracting of U.S. manufacturing,” he said.

Some of the state’s major tax sources saw very good growth in the fourth quarter, although growth was slow — four to 5.5 percent year over year, compared to 6.6 percent in the third quarter. However, the council still pointed to strong economic activity that generated revenue for the state.

Following the adoption of the Wednesday revenue forecast, Rep. Drew Stokesbary (R-31st District) introduced a bill, HB 2946,  that would provide $1 billion in tax relief to Washington residents. The House Republican Caucus threw its support behind the legislation that Stokesbary said would relieve the tax burden to families all over the state.

“Despite record revenues and voters repeatedly rejecting higher taxes, the majority party has increased taxes by billions of dollars,” said Stokesbary in a statement on Wednesday. “Last year, they raised taxes on housing, utilities and transportation. Washingtonians deserve better.”

The bill would limit the price of car tabs to $30, as well as eliminate sales taxes on prepared food sold in grocery stores and items like tampons, breast pumps and diapers. The elimination of taxes on these items would provide relief to families who buy these products, Stokesbary said in the statement.

“With today’s revenue forecast update, our state now has a $2.4 billion budget surplus,” Stokesbary said. “Instead of spending this record surplus on more bureaucracy, we should deliver immediate tax relief for working families across the state.”