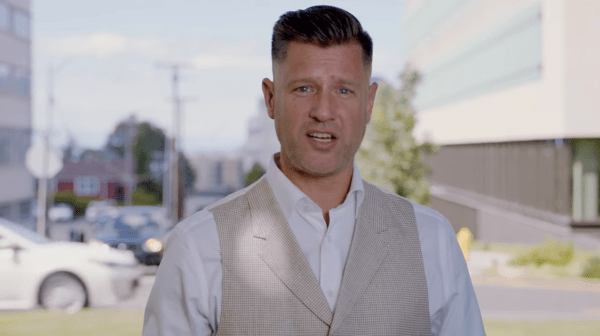 I called Freed yesterday to ask about his stance that the state isn’t doing enough to mitigate the economic impact of the outbreak and what he would be doing differently as governor.

Michael Goldberg: Last week, both House Speaker Laurie Jinkins and Minority Leader JT Wilcox cited the Legislature’s response to the coronavirus as one of the biggest bipartisan wins of the session. Neither of them seemed to take a strong stance on whether or not a special session might be required. In what particular ways, as your statement indicated, do you feel that the Legislature has “failed to respond to the widespread impact coronavirus has on working families and small business?”

Joshua Freed: I think what they were working on in the Legislature didn’t take into consideration the impacts of some of these small businesses going out of business once the restriction was put on, as we didn’t even know [the restrictions were coming] until a week and a half ago. When bars are being closed, when restaurants are being closed, bowling alleys, salons, different types of retail; there are so many different people living paycheck to paycheck. I heard about 80 percent of people are living paycheck to paycheck. It makes it very difficult for these folks in the service industry.

I haven’t seen anything come out of the Legislature or out of our Governor over the past week and half or two that takes into consideration that these shutdowns are taking place. What can we do? We’re hearing about what we cannot do – going out in public and interacting in large groups – but what can the Legislature and the Governor do to provide tax relief for small businesses during this difficult economic time? When that tax relief is given, the amount of money saved from the businesses can be allocated to make sure the employees are still getting paid.

So, reduce some of those taxes that were just implemented. The first bill our Governor signed out of this Legislature was an increase to the B&O tax. Last year many of the increases we saw of the $2.7 billion in taxes were increases to the B&O. Those are pressures on small businesses. Let’s relieve some of that pressure for this period of time and curb back spending. But what the Governor said recently was, ‘well there’s opportunities for people to get employment [benefits].’ Well that’s forcing businesses now – McMenamins let go over 3000 employees in Washington and Oregon – to fire employees just so they can get unemployment. There’s got to be another way.”

MG: You’ve asked that the Governor and the Legislature curtail “non-essential new spending.” Can you specify what would fall under that umbrella?

JF: I’d like to see our spending be more focussed on an investment mindset where we’re seeing a return on our investment. I think in a down period of time, it’s difficult to think we’re trying to grow things. So there are expenditures we’re making that could be refocused temporarily. Today, what I would ask for the Legislature to come together with some of the new spending from the last two sessions and ask: what is not essential today? I’m just asking for the legislators to come together and find out what those things might be. I’m not proposing that anything be cut, I’m just saying let’s have the conversation.

MG: With the quarantine measures in place, it looks like state & local sales tax revenues—Washington is the most sales tax reliant state in the nation—are certain to take a hit. It seems that Washington’s tax structure is about to create significant budget shortfalls in the midst of a public health crisis. Isn’t it true, then, that Washington’s tax structure has not been conducive to dealing with this crisis?

JF: I think regardless of what tax structure you have, this epidemic will have an impact. I don’t know whether it would matter if it’s an income tax, or a sales tax, or a property tax. If people will potentially lose their homes and not be able to pay their property tax, that has a huge burden. If people are potentially putting a halt on buying houses, that impacts our excise tax. If people are losing their jobs and dependent on unemployment benefits, there’s no income tax either, and we don’t have an income tax. So some people will try to use this argument to say that is why we should have an income tax. But if people are losing their jobs, that’s a loss of revenue there too. Regardless of the source, this epidemic impacts the state’s revenue.

MG: You mentioned that Olympia has raised billions in new taxes. Should it be a source of comfort that amidst a public health crisis like this, Olympia has the surplus it has. Speaker Jinkins pointed out that the legislature ended the session with an $815 million ending fund balance, which is the largest ending fund balance we’ve had in years.

JF: I’m one who totally believes we need to have a rainy day fund. I also think there are opportunities to decrease taxes. But I believe it’s essential we have a rainy day fund and it’s one of the reasons I spoke out against the Governor this year when he suggested we use this emergency fund to build 2100 beds for the homeless at a cost of $319 million. I think the rainy day fund can be used for pandemics like this as a stopgap to make sure that families and individuals are supported during this time.

The last thing we want to see is people not being able to make their rent or mortgage payments, and that just starts a house of cards that continues to fall. I think government can step in as a stopgap during unique times like this, but not always. I’m someone that believes we work hard and we pay for our own homes and we pay for whatever resources we’d like to allocate our funds toward, we don’t always look to government.

MG: What do you think about Gov. Inslee’s leadership during this crisis and is there anything you might be doing differently if you were in his position?

JF: Whether it’s President Trump or Governor Inslee, folks are really looking to their leaders right now for assurance. I think what we’re hearing a lot from both of them is just about what we can’t do and then we’re left to figure everything else out on our own. I think those folks who are in the position of having that information can say to people that we’ve gone through difficult times and we’re going to make it through this.

We’re Washigntonians, we’re strong and one of the most innovative places in the world. We have some of the most creative people and we’re going to get through this period and come out stronger. I think Gov. Inslee could do himself and the state good by showing more of that positive outlook while at the same time being realistic.