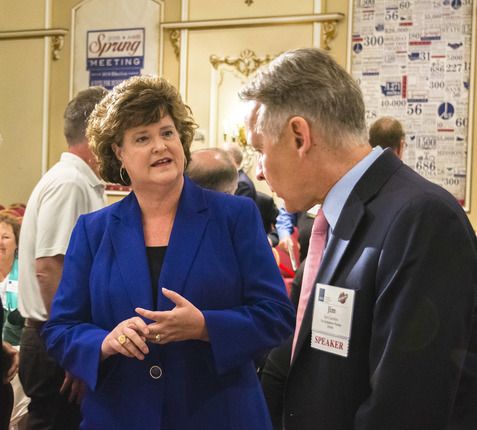 Q&A: TVW President Renee Radcliff Sinclair on the network’s past, present and future

Renee Radcliff Sinclair is gearing up for two anniversaries at the moment. Next week it will be five years since she became President and CEO of TVW, and the network is nearing it’s 25 year anniversary on the air waves.

Throughout its 25 year history, TVW has brought Washington’s citizens unfiltered access to state government through gavel-to-gavel coverage of the Legislature, Supreme Court, state agency boards, campaign debates and much more.

Since it first went live in 1995, most would agree that TVW has become an indispensable tool for anyone in the public policy arena here in Washington. I recently caught up with President Sinclair over the phone to discuss the evolution of TVW, how the network stays true to its core ethic, and where she’s steering the ship going forward.

Michael Goldberg: TVW is celebrating its 25 anniversary and you’ve been CEO for almost 5 years now. I want to start by asking you to reflect a bit on how TVW has evolved, not only since you’ve been at the helm, but since you were a legislator during the first few years of TVW’s existence.

Renee Radcliff Sinclair: Let’s go back to 1995 when our signal went on the air. Our signal actually went live on April 10th, 1995 and I was in the legislature at that point but the legislature had not yet given TVW permission to turn on the cameras that were installed on the House and Senate floors and in committee hearing rooms. The only thing that TVW was airing at that point were the oral arguments before the Supreme Court and state agency board meetings, commissions; that sort of thing. So, the Legislature was in special session in the fall of 1995 and, you’re going to need to use your imagination here, but the Mariners were in the playoffs that year.”

MG: I’ll need to fact check you there.

RS: [Laughs] But that was 25 years ago. When we started we were only doing the gavel to gavel work that the state hires us to do and since then we have developed a number of regularly produced shows — we now have 6 that we produce on a regular basis — and these are award winning shows. We also produce two award winning documentaries per year. In 2015, shortly after I got here we secured the funds to rebuild the technical side of our business which allowed us to offer high definition programming. We’d been in standard definition programming previously. We’ve also continued to add cameras around the capitol campus so that we’re able to manage the gavel to gavel work in a more efficient way.”

MG: You’ve had a front row seat to Washington State politics for years but I’m curious to know if since being at TVW, you’ve come to view the Legislature any differently? I imagine that an institution must look a bit different from the viewpoint of an impartial documentarian rather than active participant.

RS: It’s interesting, I served in the Legislature and then lobbied at both the federal and state levels for about 15 years before I came to TVW. And you do get a different viewpoint in all three of those seats. We work very hard here to never impose our own viewpoints or our political ideas into stories that we’re working on. We have lengthy conversations about the words we’re choosing to use. We think very carefully about the images we’re putting on the air to augment those words. We do this to make sure we’re serving our role as an informer rather than influencer. We want the people who watch TVW to see all the information we provide and then make up their own minds.

I must say, I find myself coming full circle. I started my career in print journalism so it’s fun for me to be back on this side of it again, always looking for the great stories that are coming our way. But I’m also still a registered lobby, I lobby on behalf of TVW and so I do feel like I’ve come full circle with all of it.”

MG: It seems like we’re in the midst of a period where outlets are being pushed to take sides or speak out in clear terms about certain issues. How have you managed to stick to that informer role rather than crossing over into the realm of commentary?

RS: One of the nice things about looking back at my time in the Legislature, I was considered a moderate. I worked very well with folks on the other side of the aisle. I think even now, that reputation is serving me well here at TVW. It’s important to point out that TVW has had four presidents and we’ve all been associated with partisan politics in one way or another. And yet, being able to manage this organization and manage it in a way that is free from partisan politics is something that we can and need to do. I’m really proud to say that all four of our presidents have done an amazing job at keeping politics out of our work. We tell a story, we tell it in a very in-depth way, and because we own our own airwaves we can take as much or as little time as necessary to tell the story. We can do it in a way that allows the decision makers to tell the story in their own words without our interpretation. I think that’s the value we bring — the commitment to telling the full story beyond a 30 second sound bite or a 90 second story on traditional news — which there is a place for, don’t get me wrong. But we have the opportunity to tell the deeper story and we work diligently to make sure we are telling those stories in ways that allow viewers and listeners to draw their own conclusions.”

RS: When I was very young my family took a road trip from Eugene Oregon to Washington, D.C. We were in D.C. for a month. I was six, my oldest grandfather in the vehicle was 86. The first day we were in D.C. we went and sat in the gallery, in either the House or the Senate, and watched the activity take place on the floor. I was absolutely mesmerized by it. When my family got up to leave, I didn’t even notice and just stayed right there. Eventually my brother came back and got me. My dad really recognized how important this was to me, so he took me back to watch every day we were there. It was an amazing experience to have as a child but also a really interesting bonding experience to have with my dad too.”

MG: How might we see TVW change going forward?

RS: We’re pretty maxed out right now. With the contract we have with the state, they pay us about 15 percent of our annual budget. So we spend a lot of time fundraising in the private sector and taking a look at where we are now and where we need to be in the future, we are looking at a variety of interesting and new revenue streams for TVW moving forward. I would encourage everyone to stay tuned because the future is looking interesting for TVW and it’s my job to ensure we are going to be here for the next 25 years.”