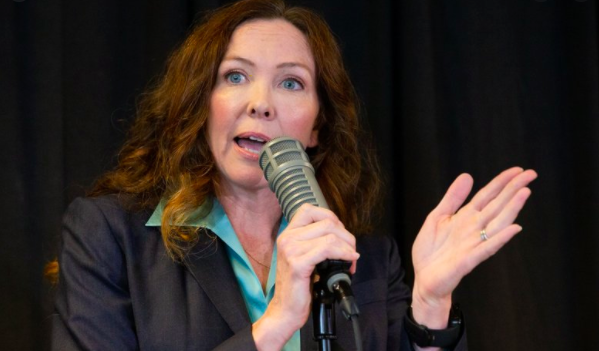 Attorney Ann Davison Sattler is running for Lt. Governor to bring political balance to Olympia, which she believes is lacking. Sattler ran a spirited race for Seattle City Council last year, advancing to the runoff but ultimately losing to incumbent Debora Juarez.

After running for city council, Sattler realized she no longer felt aligned with the Democratic Party, of which she had long been a member. She now identifies as a Republican and is hoping to challenge the majority party should she become Lt. Governor. I caught up with her recently to hear more about her run and the issues she wants to focus on in office.

Michael Goldberg: Why are you running for Lt. Governor?

Ann Davison Sattler: To me the most important thing is to bring balance within our political system in Washington state. I think we have a large group of voters that are separate from the political process and they don’t feel their voices are heard. With the one party rule we have going on there is an arrogance of power. There is very little compromise because they don’t think they have to have any compromise on big issues. So I want to bring balance back to the political system.

I also want to make sure that the Seattle policies that are really neglectful – that have left our city to be known for our lack of adequate response to problems on the ground – aren’t on a pipeline to Olympia. Substantively, these are the same issues I talked about in my city council campaign which are housing, homelessness, addiction, public safety, and mental health.”

MG: You are running as a Republican. In announcing your intention to run, you said that you’re running as a Republican because, among other reasons, the Democratic Party needs to be questioned and checked. You also said that a big part of the reason you’re running is that the things you want done aren’t getting done. Should you win, there’s a good chance you’ll be presiding over a Democrat-controlled Senate and under a Democratic Governor. What is your plan for working to build coalitions in this circumstance?

ADS: I think it’s really important to note that my campaign my last year was for a nonpartisan race. I chose that because I really preferred that. That’s what people care about: the issues, not the party system. But we are in a party system until we have a revamp of things, obviously. This is what we work within. Talking to people about issues is really how we’re going to make the compromise. Instead of just going, ‘how is my party voting’ as an elected official, it’s really about having the conversation and making sure there is balance in that one approach that we’re taking on an issue. If you’re leaving out the other side, then it’s clear you’ll have one party rule.

So what this means is that you’ll have approaches from both parties and from all around the state, not just Seattle’s way of doing it. I think a lack of that is why someone like me has come out of the woodwork, because I’ve not seen them wanting to be inclusive. That really is the first step: acting in a way that is inclusive of other’s ideas, and not holding it at arm’s length simply because it comes from a certain location or a certain side of the aisle.”

MG: When you say reaching out, you mentioned other areas of Washington. It sounds like you feel people from those areas perhaps haven’t had their voices heard in Olympia. As Lt. Governor, you will also need to reach out to legislators who represent constituencies, like in Seattle, who support many of the city’s policies. A lot of people live in King County. How do you address the needs of people in the Seattle area, whose politics you’re not a fan of, and the politics you want to see represented in Olympia?

ADS: Well, I think some of the intent on the progressive side is good. It might just be a matter of getting to the outcome that is desired, or the cause they think is required to get to that outcome. Those are the different methods with which I would like to talk with them. I am not here to talk about how we should shame anyone for their political thought and that includes all the way from the far left progressives to the far right. I just think that everyone needs to see that we’ve got to make compromises as we move forward. We are going to see betterment for the public as a whole if we have a blended approach.”

MG: The homelessness crisis has obviously been a key issue for you and I imagine it’d be something you’d want to focus on as Lt. Governor. Another priority you’ve listed is not wanting to waste taxpayer money. I’m assuming that means you’re against more expansive spending to address this issue. How do you address the problem at scale without more programming?

ADS: While I was talking specifically about Seattle last year, the point is where those dollars are going and whether they are being used in an effective way. Senator Steve O’Ban is doing tremendous work. It’s about looking at programs that are targeted and using dollars in a way so people can get shelter and other types of human services. We need clear steps for people to advance toward being self-sufficient and contributing back to society. That is our goal and making sure that all along the way we are cost effective. At the end of my campaign last year, King County was wanting to bring in trailers for shelter and they were looking at $90,000 per unit. We could find them for $6000 a unit. I’m not saying we can’t do the programs we have, I’m saying there’s probably excessive spending going on. We need to make sure we are strategic and purposeful with the dollars, and if something isn’t working, we change direction. But doing nothing and letting people subsist in whatever form of self care or lack thereof is not the approach we should be taking.”