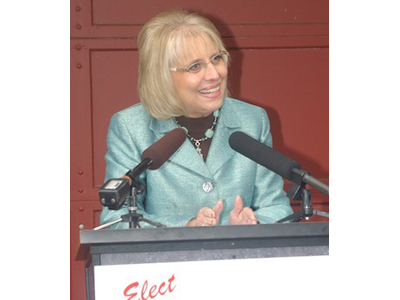 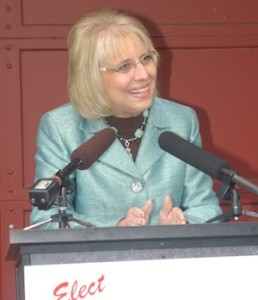 OLYMPIA, Oct. 25.—The state’s campaign-finance watchdog agency won’t be taking action on a complaint from the state Republican Party about a curious $3 million political contribution from a California billionaire that came after a deadline for big political checks.

Public Disclosure Commission staff says it is satisfied with the explanation it got from Tom Steyer’s NextGen Climate Action Committee – that the money won’t be spent in the state of Washington. And that seems to be the end of that.

“We are comfortable that before the contribution was given to them, they were not going to spend any more money on candidates or ballot measures in Washington this year,” said PDC spokeswoman Lori Anderson. And just to make things clear, the committee is sending a letter to that effect to the agency that will be posted online with its campaign-finance reports.

Normally a case that involves the uber-complicated nuances of Washington campaign finance law would not be worth a moment of attention from anyone outside political circles. But Tom Steyer certainly is a special case. The retired hedge-fund manager is the single biggest contributor to Democratic state Sen. Nathan Schlicher, D-Gig Harbor, who is in a tough race against state Rep. Jan Angel, R-Port Orchard. If one follows the money, he has dumped an astonishing-for-Washington $455,000 into the race. The money has gone in sometimes roundabout ways to the umbrella independent campaign for Schlicher that is being managed by the so-called She’s Changed PAC.

Steyer is emerging as one of the deepest-pocketed players on the left side of the aisle — a Democratic Koch Brother if you will. Last year he spent $32 million to promote a successful ballot measure in California to promote green energy, and he even spent a few minutes onstage at the 2012 Democratic National Convention to urge action on climate change. This year, through his Center for the Next Generation, he formed the NextGen Climate Action Committee to funnel money to candidates in state-level races. So far he has written checks for $9.3 million.

And this is where the problem lies. His committee is registered with the Federal Elections Commission, yet because it is spending in Washington, NextGen also registered as a political committee in Washington state. The committee, it might be noted, is making big contributions in one other race, a Virginia gubernatorial contest, where it has spent some $5 million to back the Democrat. But Washington Republicans were quick to allege a campaign violation when the committee received a $3 million check from Steyer on Oct. 18, four days after a deadline had passed for big contributions to Washington state political committees. During the three weeks before an election, for the most part, contributions to political action committees are limited to $5,000.

Maybe there is nothing illegal about the contribution in the PDC’s eyes, if the money isn’t intended for the state of Washington. But it has given Republicans a chance to point out that Schlicher’s biggest fan is a fellow who lives nearly a thousand miles away and who has a single-issue focus.  “He is trying to buy our state Senate seat with a last-minute and illegal $3 million political contribution,” Angel said at a news conference Thursday.

Conflict Between State and National Rules 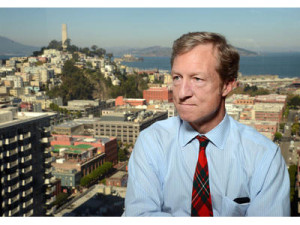 Tom Steyer, former San Franscisco hedge fund manager, has emerged as a major financier of campaigns — a Democratic Koch Brother if you will.

Here’s the trouble: Washington hasn’t seen much spending of this type before. Aside from a few political committees maintained by national trade associations and union groups, there aren’t many PACs registered here that make contributions in multiple states. In those other cases, the national groups frequently set up separate PACs in this state, just to draw a clean line between national and state-level regulation. And often those groups are playing in ballot-measure campaigns, rather than candidate races. Ballot-measure efforts are not subject to the $5,000 restriction on last-minute donations. So what happens when a PAC that finances state-level candidates gets a whopping contribution that apparently violates Washington state law, but the money is earmarked for another state?

That was the issue here. The Public Disclosure Commission staff went into a huddle Thursday afternoon to sort out the issues. Steyer’s committee had asked for advice earlier this month, before the contribution was made, Anderson said – then it said never mind, it would make all its contributions before the Oct. 14 deadline. After that, Steyer apparently changed his mind and wrote the new $3 million check. Where exactly the committee plans to spend it is a matter of conjecture – Matt Lewis, spokesman for the committee, wasn’t revealing anything when Washington State Wire spoke with him Wednesday. But inasmuch as the only other race in which the committee is spending money is the Virginia governor’s race, it doesn’t take a lot of guessing.

As long as the money won’t be spent in Washington, the staff decided everything is jake. “They are no longer under the PDC’s jurisdiction,” Anderson said. “We are comfortable that they are done.”

The decision not to take action leaves Republicans rather unimpressed – the $3 million contribution does appear to conflict with state rules. But at least Steyer won’t be spending that $3 million in Washington. Said state Republican Party communications director Keith Schipper, “We filed this complaint to keep a California billionaire from funneling more money into defeating Jan Angel in the special election in the 26th, and while we don’t see how Tom Steyer could be exempted from this [Washington state rule], we are grateful that they have taken the necessary steps from using that money in the election to defeat Jan Angel.”

The case also has exposed a weak spot in state campaign-finance rules. A state law passed in 2011 says that before a political action committee in Washington state can transfer money to another political action committee – a normal campaign practice – it must have contributions from 10 registered Washington voters who make contributions of $10 apiece. But there is no way to tell if Steyer’s committee complied with the requirement. State law does not require the reporting of contributions of less than $25. It is possible that NextGen did comply – the campaign-reporting forms indicate that aside from Steyer’s $9.3 million, the committee received miscellaneous donations of $110 from 11 people. But the forms do not indicate who those people are or how much they contributed, so there is no way to check if they are indeed Washington registered voters or if each one of them ponied up the required $10. Anderson said no separate report is required that would allow the PDC or other parties to determine whether the rules have been followed.